Back to library events! -- Joy Kluver 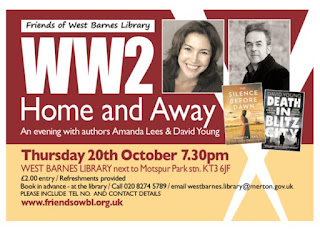 Before the Covid pandemic, I was organising author events at my local library along with the Friends group. We went online for a few sessions during lockdown but then it fizzled out. However, we're now back and on Thursday 20th October at 7.30pm, I'll be chatting to David Young and Amanda Lees about their new WW2 books. I'm excited but also daunted for a few reasons: What if no one comes? I haven't been to check on the sign-up yet so no idea on current numbers.  What if I've forgotten how to ask relevant questions? I have done a few online panels over the last couple of years but there's something about in-person events that make my throat dry up and incoherent words babble out of my mouth.  What if I can't get authors to come? This seems less of a problem. Authors seem very keen to meet with readers again and libraries are ideal places to do that.  Lastly, and most importantly, can I still remember how to make cookies? My triple choc cookies (Lorraine Pasca
Post a Comment
Read more

Emily likes to make an entrance. Had she been born in the time of grand balls in stately homes, she’d have waited to be announced on arrival – Lady Emily Coombs – and she’d glide into a room and capture everyone’s attention. I’m more of a sneak-in-the-back-door girl; I like to feel my way around an atmosphere, gauge the room, watch from the shadows until I know who is in charge – who are the leaders and how will things play out. Because no party is simply a get-together of friends. There are friendship groups, power-plays, things that might happen and things that will never happen. I don’t expect it’s any different in the adult world and us teenagers are simply learning the rules of the game early, so we can figure out how to bend them when we need to. Tonight, the worst that will happen will be bruised egos – maybe a fight – but it’s all practice for the real thing.  Or so I tell myself as Liam strolls over to us in the hallway, his hand brushing my bum in a gesture I suspect nobody s
Post a Comment
Read more 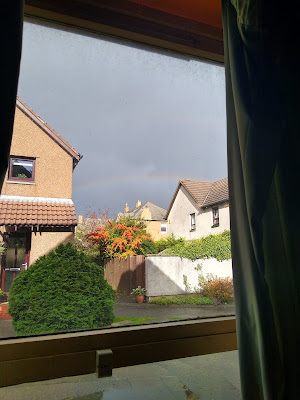 Autumn rainbow from the window I very nearly forgot about my post this month, because the time had gone so quickly since the last one. This was partly because of several family birthdays and an unexpected babysitting opportunity, but also because my voluntary role as secretary to a local committee has expanded into other areas since the organisation moved to new premises. One aspect of the expansion is that our new place has a built-in reception area which almost cries out for someone to man it during opening hours, but the existing very small staff don't have time to do this and we can't afford to employ anyone else at the moment, so volunteers have been recruited and I've unwisely said I would act as an emergency back-up. It's quite difficult to tell exactly how much work will be needed at each session, but what I've found during the few times I've been acting as receptionist is that generally activity groups that mainly consist of women (knitters, crafters, e
1 comment
Read more 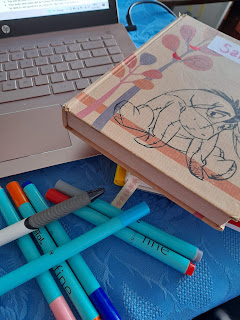 Whisper it quietly but I don’t really belong here! I think everyone else on the Authors Electric blog team are proper published writers – me? – well I dabble a bit here and there but I’m NOT a proper Writer with a capital double U. I have everything I need to be a writer I’ve heard Joanne Harris, best-selling author of Chocolat and so many other wonderful novels, say “if you write, you are a writer.” But there’s always more than a smidge of doubt that creeps in telling me this is not really my world, my place is on the outside looking in, reading rather than writing. I may never write a best seller – some days I wonder if I’ll ever publish a full book! That does require actually writing it first and the longer I stick at it I realise just what a huge mountain I have to climb. Can I really do this or am I an imposter? My husband told me I didn’t know the “right sort of people” to be a writer. A friend told me when I started a writing class, “the first novel you write will b
2 comments
Read more 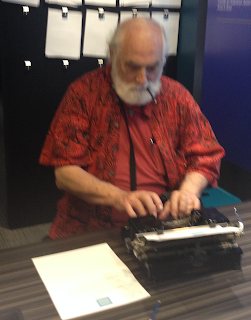 Writer at work - old style When I was seven, it was a very good year – sort of. World War II ended. The Allies won. America dropped atomic bombs on Hiroshima and Nagasaki, beginning the nuclear age, which “changed everything except our way of thinking,” as Einstein observed, adding that he “should have become a watchmaker.” During the war, my father, who had worked in his family's food brokerage business back in Boston, took us to Los Angeles and became a welder at a Lockheed Aircraft plant in Burbank, California, building P-38 Lightning fighter bombers. He had wanted to be a doctor, but couldn't afford medical school during the Great Depression. My mother sang with a dance band at a faux Arabian Nights potted-palm night club on the Sunset Strip, the kind you see in old Astaire movies, but with a bit less swank. She had been a promising opera singer in New England, doing lead roles and recitals on stage. My parents saw themselves as thwarted, although they didn't use the w
4 comments
Location: London, UK
Read more 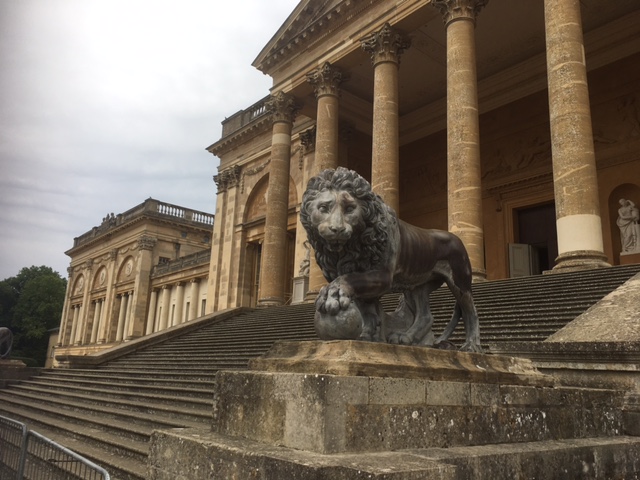 Of Buttercups and Rhizomes *   No, you can't have your ball back Buttercups and Rhizomes: a metaphor for our internet age   This is a picture which I posted on Twitter recently and which got a number of likes – eighteen in all - which believe me isn’t that many. Some people get hundreds. The touch of heavy humour in the picture is my attempt to catch the eye of you, the reader. I must apologise, however, that this story is not about lions or even football, but an account of a thesis and a number of books that I have received from those with whom I have made a Twitter connection.     My story begins with reference to a doctoral thesis by one of those contacts about reimagining the educational curriculum, a subject close to my heart. This is a lengthy study called,  Rhizomes, Assemblages and Nomad War Machines , by Kay Sidebottom. It was a challenging read and I made notes as I went along, but it contained the idea that Twitter is like a rhizome, and that things can be connecte
5 comments
Read more

All is True in Rumer Godden’s The Greengage Summer, finds Griselda Heppel 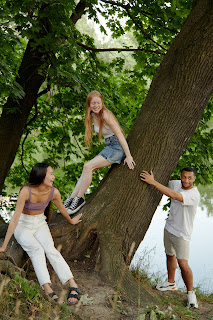 First, get rid of the parents. Rule 1 of writing a children’s adventure story. You have to neutralise the parents in some way because they’ll prevent your child characters running any sort of risk further than climbing the odd tree, or getting home after dark.  Tree-climbing with parents - not much risk here. Photo by Darina Belonogova: https://www.pexels.com/photo/ people-climbing-the-tree-8764872/ That’s why so many heroes of children’s books are either orphans, or have parents unable to function as a result of illness or other misfortune.  For obvious reasons, stories for adults don’t have to follow this rule; hence I was convinced - at the beginning - that a book I read recently was for children, not grown-ups. The heroine was 13, after all, and most of the other characters were younger than that. Their father was away collecting plants in Tibet (the classic Absent Explorer Father trope), while their mother was taken seriously ill right at the start of the story. The children fi
3 comments
Read more
More posts