Showing posts from April, 2019
Show All

One of those days: N M Browne

By Nicky - April 29, 2019
Some days I struggle to come up with anything blog worthy. You might say that has never stopped me before and you wouldn’t be wrong, but today it did.   I addressed this problem as I do too many others by drinking black coffee and eating dark chocolate. Apparently, liking both those things makes me a psychopath. I stare out of the window and immediately get a great idea of a story. But I am not going to write a story, am I? I have to say something interesting about publishing or writing, or the creative life. I eat a second square of chocolate. Apparently, it contains anti-oxidants which is good for my brain. There is no obvious immediate impact. I return to contemplating the garden. The large tree at the bottom of the garden needs to be removed. I think it knows. I see something baleful and potentially threatening about the way it is waving at me in the wind. A second cup of coffee is called for. I should have started this yesterday or maybe even earlier. I should have dr
3 comments
Read more 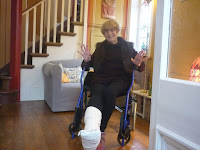 And so (as every newsreader/interviewer begins) this is what I've been dealing with during the last two and a half months - a Total Ankle Replacement for a really crappy ankle.The original injury happened over five years ago, during which I was determinedly walking through it, but last year I found that I was increasingly unable to walk at all except for very short distances. Even the brief walk to my local supermarket was becoming too much, and I began pacing myself according to which tree I could walk to and clutch for support. In other words, I became a serious and committed tree-hugger. Something clearly had to be done, and with a stark choice between surgery with its very long recovery period, and a wheelchair for life, I reluctantly chose the former. The very worst part of the recovery period was the fortnight when I had to wear an extremely heavy cast, and during which I was almost totally dependent. This was followed by four weeks in a much lighter cast in a fetch
6 comments
Read more

There have been reports that President Trump has been threatening to write a tell-all book when his presidency is finally over. Every president does it, of course, and it would be surprising if Trump didn’t see it as a way to (a) make some easy money, (b) continue building his fame and (c) settle some scores with all those who have mocked him over the previous few years. The ghostwriter who lands this particular commission will need the patience of Job as they try to untangle the fabrications of the last few years and get to anything resembling an insight into this particular heart of darkness. If Trump were to give them a free hand, however, it could be a great read. It’s certainly the elevator pitch from heaven; “A family not unlike the Corleones manages to get control of the most powerful nation in the world”. To be able to get even a glimpse from the family’s point of view could make it as gripping a read as the Great Gatsby. Ingredients like crime, wealth, sex an
2 comments
Read more 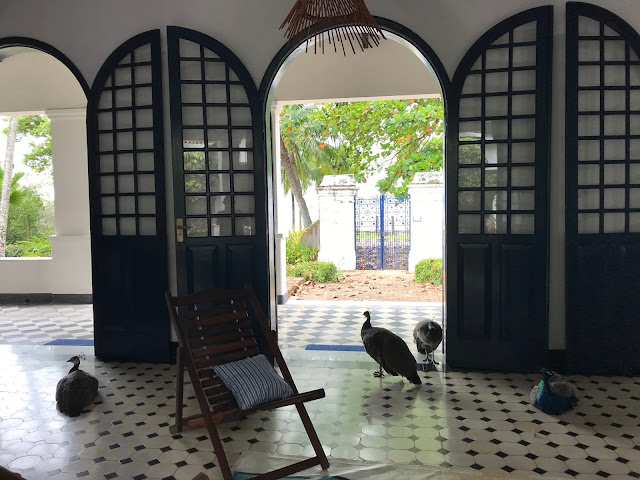 That time when you want to read but the peacocks haven't finished their meeting Greetings from the Sacatar Foundation in Brazil ! Two dedicated months to work on my manuscript seemed like a fabulous opportunity (my first two novels were completed in residencies in the US and India). The application was competitive and the website alluring; a writer’s studio on stilts, other studios dazzling white and remote and sea-facing…when I received the offer, I imagined writing to the sound of breaking waves.   Hammocks and a wide verandah This is indeed a stunning property, as you can tell from the pictures. But after two and a half weeks here, I’m not sure it is for all writers. There is only one writer’s studio. In this cohort of six accepted residents -- three Brazilian and three foreigners -- all of us are writers.  So I have been assigned a writing shed. My workspace has a view of the sea fringed by palm trees, but it is essentially a large artist’s studio fur
3 comments
Location: Itaparica - State of Bahia, Brazil
Read more
More posts