Showing posts from November, 2019
Show All

How Do You Make Space for Yourself to Write? -- Damyanti Biswas 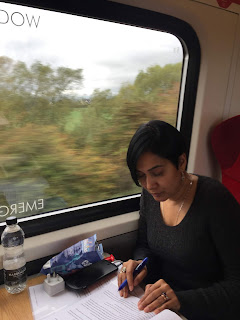 Writing on an ipad in bed at dawn against the light of the electric heater—the writing life demands that you write wherever you are. I’m supposed to be on vacation, but here I am, typing away.  I’ve written on moving buses, trains. Not boats. Definitely airplanes. I remember tearing apart (physically) an entire manuscript while on a train in Scotland, as stunning views or slow-moving sheep reflected on enormous glass windows.  An entire short story was once written on a flight to the UK from Singapore. I was tired, grumpy, could not sleep, so I thought writing would help me. It did not. I inhaled copious amounts of caffeine, furiously typed a draft that only made half-sense, and alighted a cranky woman—perhaps the only time that finishing a piece gave me a fit of rage and a crick in the neck, instead of the sense of accomplishment that usually follows. I like having written, more often than not. A friend wrote yesterday about w
4 comments
Read more

I’ve just been editing my novel ‘Badwater’ which I hope will be out next year with the small independent publisher, 'Kristell Ink.'I enjoyed reading it again. I hope it is OK to admit that?      I wrote the first draft many years ago. It is set after the impact of climate change has left  most of SE England underwater and, though set in a broken society, it isn’t dystopian. My heroine and her friends are prepared to break with tradition to make their world better.The story was written long before the Extinction Rebellion and my Ollu is no activist, it is far too late for that, but she is brave and resourceful. It was rejected by Bloomsbury for not being an ‘N M Browne’ book, even though, I can assure you that NM Browne wrote it. Reading it again, it is very much in keeping with   every other book I have ever written. By that I mean it is a fantastic piece of work that deserves great success and a plethora of awards,   but in addition to its evident brillianc
2 comments
Read more

Plagiarism and The Sea of Stories, by Enid Richemont 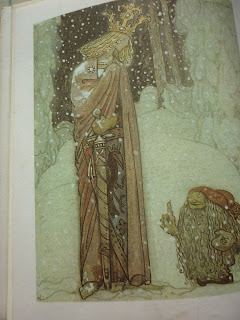 When does using traditional, or well-known and loved stories such as those by Hans Christian Andersen (one of my all-time favourite writers) and the like, become plagiarism? There must be a HCA estate of some kind, yet versions of these stories appear everywhere - in film, theatre, books and whatever. It's said that there's no copyright on ideas, that ideas are universal, and we all know where Shakespeare got a lot of his from. Might there be, as in Salman Rushdie's children's novel, a "Sea of Stories" into which we dip? I'm mentioning this, because I've recently spent some time re-structuring and shortening one of the stories from the John Bauer illustrated collection of Swedish tales, all of which, I think, must be re-interpretations of much older ones. If you're not familiar with John Bauer's work, here's an   idea of it on the left - magical! Most traditional folk and fairy tales seem to centre on fairness and honesty. The one I'
2 comments
Read more

“How do you market a book successfully?” is quite possibly the hardest question to answer in publishing. I would say that it is actually harder than “how do you write a book?”. In most cases the problem is a lack of decent marketing budgets within publishers. If they have high-profile, brand-name authors, who are already bringing in a steady cash flow, there are several avenues that they can go down in order to create awareness and bring in the sales. For the majority of books, however, there is only really the time and money for a bit of light pr and then it is up to the authors to make themselves famous and their books attractive. Suppose, for a moment, however, that you have ghost-written a novel for an author and that author decides that they are willing to put a great deal of money and effort into the marketing? Where should you advise them to direct their funds in order to be most effective? That is the situation that I found myself in this month. The book in qu
3 comments
Read more 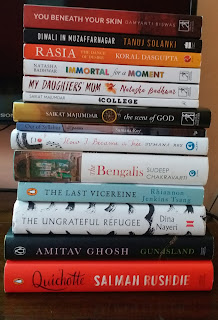 2019 has been a well-read, well-reviewed year for me. Actually, half-year. For most of the books that I read/reviewed happened between the Bengali New Year (Nabo Borsho) in April and the biggest Bengali festival (Durga Puja) in October. They are Bengali markers in an English calendar simply because the first and last books I read – by some chance – coincided with the Bengali festivals. I took a photo of the small wall of books after reading the last – and felt, strangely, grateful! Most of this year – like most of the last 3 – has been an uncertain one for me; it thus felt good to still have the reassurance of books to fall back on in trying times. I just hope this one factor remains constant in my life!  So, here's my book list....  (NB: they were all read, but not all published in 2019). My Book List: 2019   My Daughter's Mum  (Natasha Badhwar)  –  The best thing about this book is getting to know how the mother grew up with her daughters & no
4 comments
Read more
More posts