Showing posts from September, 2020
Show All

Eden’s recent discussion of all the different Points Of View a writer can choose when telling a story came at just the right moment for me, having just finished reading a book which pushes this rule to the utmost. And got away with it. Brilliantly, as it happens. When I started writing children’s books, I saw no reason not to change points of view between characters. How else to follow their different paths if they get split up on their journey, as happens in Ante’s Inferno ? I needed an editor to point out that this was Ante’s story from the start, and that abandoning her half way through to get into the heads of the other characters wrecked all narrative tension. Restructuring the story was difficult but of course the editor was right. I learnt my lesson. One day I may be ready to bring off what many writers – Tolkien and C S Lewis among others – do, but not yet. And obviously, changing points of view between characters can only work if you’re writing in the third person; or,
3 comments
Read more

This blog was originally published in 2012. Enid Richemont is indisposed.  I've just been re-reading Linda Newbery's post on editors and editing, and I think that, on the whole, I've been very lucky. For my earlier books with Walker, I worked with Wendy Boase, Anne Carter and later, Mara Bergman, and in nearly every case, the process of editing brought added richness to the stories. A really good editor is like a midwife (sorry, guys, but even you can be pregnant with a good story which might have to be eased into the world in the most appropriate way). For one YA book, THE GAME, the introduction of a new character was suggested. I kicked, screamed and objected, finally capitulated, experimented - et voila! Something  amazing happened (thank you, Anne). The next of my out of print YA Walker books to become available as an ebook  will be WOLFSONG. It's set in a big, ancient house in Brittany, a real house which played an important part in my own life - it
3 comments
Read more

Although it is quite possible to keep writing during lockdowns, quarantines and the various other restrictions we are currently living under, Covid has made it hard to spend face-to-face interview time with people. If you are planning to write a full-length book with someone, it is possible to do the necessary talking via Skype, Zoom or whatever else you are comfortable with, but not as good when it comes to getting to know them and their voices thoroughly. Needs must, however, and so I suggested to a new client who did not want to wait until after the plague times have passed before writing his book, that we utilise Skype for the purpose of him telling me his story. “Let’s use Whatsapp,” he suggested and I did my best not to panic, only ever having used Whatsapp to communicate with my wife and children, and the occasional friend who has managed to gravitate there from text messaging. “I’m not sure that I know how …” I started. “It’ll be good,” he assured me, “I will just lea
4 comments
Read more

By Rituparna Roy - September 25, 2020
This is really not a blog post... this is just a note of longing, a sigh, from a tired soul.  Tired beyond words by the reality of the pandemic - as it is borne out in her particular case. 6 months of not being infected by the Corona virus should be considered luck, and the life lived gratefully accepted... but utter exhaustion can kill joy and numb gratefulness.  One longs for rest, sleep, peace... one longs for Innisfree... Thank you, Yeats, for understanding my state so well... & giving it utterance more than a century ago! ***** The Lake Isle of Innisfree BY  WILLIAM BUTLER YEATS I will arise and go now, and go to Innisfree, And a small cabin build there, of clay and wattles made; Nine bean-rows will I have there, a hive for the honey-bee, And live alone in the bee-loud glade. And I shall have some peace there, for peace comes dropping slow, Dropping from the veils of the morning to where the cricket sings; There midnight’s all a glimmer, and noon a purple glow, And evening ful
6 comments
Read more 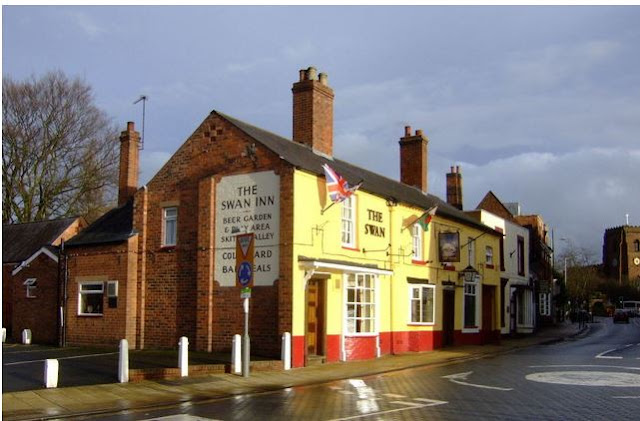 And no, for once I don't mean Alexander Boris de Pfeffel Johnson. (Although he is one.) The Swan Inn, Newport, Shropshire - for credit, follow link.     In my blog last month , I told of jaw-dropping deceptions. My latest book, Bad Girl, features just such a conscience-free liar and I wanted to demonstrate that I wasn’t, entirely, making it up. (Though, obviously, some of it...) Bad Girl by Susan Price People fall for these enormous lies precisely because they can't believe them. They think, 'No one could expect to get away with a lie as unlikely, brazen and ridiculous as that. So it must be true.'  If you want a lie to be believed, make it a big one. This month’s despicable scammer was born Robert Freegard but adopted the posh double-barrelled surname ‘Hendy-Freegard’, as becomes a con-artist. I’m not going to pander to his pretensions, so I shall refer to him as ‘Freegard.’ In 1992, Freegard worked in Newport, Shropshire, as a barman in The Swan. Three stude
6 comments
Read more
More posts