Showing posts from April, 2013
Show All

The year was 2008 and Libros International had just published my debut novel Rachel’s Shoe .   I was so delighted that a publisher had accepted my novel for publication that I didn’t asked too many questions about how they intended to market my book in those pre-Twitter, pre-eBook revolution days. Naive? Absolutely. But I soon caught on and realised that most small publishing houses simply don't have the budget to compete with the big names in the industry. So it would be down to me to get my book noticed. Fortunately, marketing was something I knew a little bit about; and so the novel, its sequel, and four other titles have since been launched on an unsuspecting public and they don't seem to have minded too much.   2008 and the following years won't go down in history as a period of economic success, especially in the book industry, and so it was of little surprise that my publisher at the time, like so many small publishing houses, eventually susp
9 comments
Read more

I'm a romance writer (albeit of the futuristic kind) so my hero is the most important character in my story, next to the heroine of course! Usually, I find heroes fairly easy to create. He needs to be charismatic, strong, smart and a perfect foil for my feisty femail protagonist.  The trouble is, heroes (and heroines) tend to take on a life of their own. In my first novel, 'Starquest', the shy, young man who was supposed to be a supporting character, and to quietly bow out two thirds of the way through, turned out to have  hidden qualities. The murder of his parents and sister and the desire for revenge had made him far stronger than his gentle, unassuming demeanour suggested. He basically took command of the plot and allied himself with the heroine to demand (in a gentle, but very insistent way) that I change my carefully crafted ending . 'Resistance was futile' to slightly mis-quote alien villains in a famous TV and film series. Eventually I was obliged to gi
4 comments
Read more 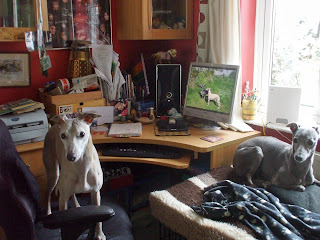 At  Electric Authors we're a varied bunch writing  everything from crime to humour to self-help. The way we work is also as varied as the places we work. So three EA bloggers have decided to band together and share where we work on todays post.           Karen Bush - visit website   Over the years I’ve worked in all sorts of places: at our last house I actually had the luxury of an office. OK, it was only 6 by 8 foot, but it’s amazing how much you can cram in. When we moved to the current house I was in the middle of writing a book: no time to unpack – I just set up shop in the corner of the sitting/dining area, and although not originally intended, have been there ever since. My partner gritted his teeth and set up a desk unit and some cupboard units that he felt he could live with as furniture, and it’s perfect. I have a view into the front garden where I can watch the fish and frogs frolicking in the pond, spot any visitors arriving, and it’s
4 comments
Read more
More posts