GUEST AUTHOR: Stephen Livingston – How I came to publish for Kindle.

By Katherine Roberts - June 30, 2011
We’d like to introduce you to Stephen Livingston, who has bravely agreed to be our first guest on Kindle Authors UK. In contrast to many of our regular bloggers who are republishing out of print titles for our fans, here is an author at the very start of his career hoping to hook some new readers with his e-books. Over to you, Stephen… 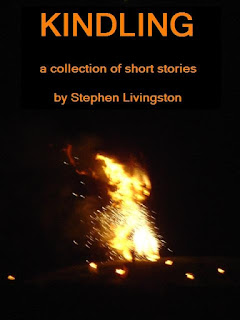 My career in traditional print format began shortly after graduating from the University of Glasgow where I’d gained a Master of Arts degree with honours in English Language and Literature.  I entered and was a winner of the inaugural Canongate Prize for New Writing with my short story “Choose Your Future”.  This story became my first published work in the prize-winning anthology Scotland into the New Era.

From there I went on to win another short story competition, the EndPapers Tales Series, with my story “The Waster’s Tale”.  This was published in the anthology Glasgow Tales and I completed a post-graduate Master of Letters degree in Creative Writing at the University of St. Andrews.  Whilst at St. Andrews we put together an anthology for the course called Scores 4 to which I contributed a story “Recycling”.

Two months ago I bought a Kindle and decided to put together a collection of short stories to try out the burgeoning e-Book market.  I believe that e-Readers are revolutionising the publishing industry and that the complete artistic control and seventy percent royalties offered by Amazon are the way forward for authors.  I also think that the short story form will be revitalised as the use of e-Readers and smart phone apps for reading become more prevalent in today’s increasingly fast paced society.

I’ve titled my e-Book Kindling and it collects my three previously published stories along with nine new stories.  It is written in a variety of styles and deals with a variety of themes, from the experimental “Choose Your Future” written in the second person, to “The Tell-Tale Trunk”, a contemporary reworking of Edgar Allan Poe's classic The Tell-Tale Heart.

Now I am concentrating on finishing off a novella called "Glastonbury" and then continuing work on my first novel.

Good luck with that novel, Stephen!

Stephen Livingston said…
Hi Agnieszkas, I look forward to hearing what you think of the stories in my collection. Poe's "The Tell-Tale Heart" is one of my favourite short stories and I enjoy writing in the second person, Best wishes, Stephen.
1 July 2011 at 10:51

Anonymous said…
I love Poe - so I shall have to check this out! Trouble is my Kindle is filling faster than I can read!