I've been writing about Man's Best Friend – dogs, for well over 20 years. And recently my output has doubled. Payment for these articles hasn't doubled however, in fact I'm doing a whole series of animal welfare charity articles for free for an on-line magazine, because it's a cause dear to my heart.

Writing about dogs began way back in the 1990s when I spotted in Freelance Market News (which I still get every month) a listing for a dog magazine called Dogs Monthly. At the time one of my dogs, Pippa, was taking part in an amateur dramatic production at the Wheatsheaf Theatre next door to my house.

My teenage son and his pal used to do the theatre's sound and lighting, and when the play called for a dog to walk on with one of the actors and be fed crisps, my son thought Pippa would be perfect for the role. She didn't get an Oscar but she did get interviewed on the radio – yes honestly! And I got my first article in Dogs Monthly magazine. 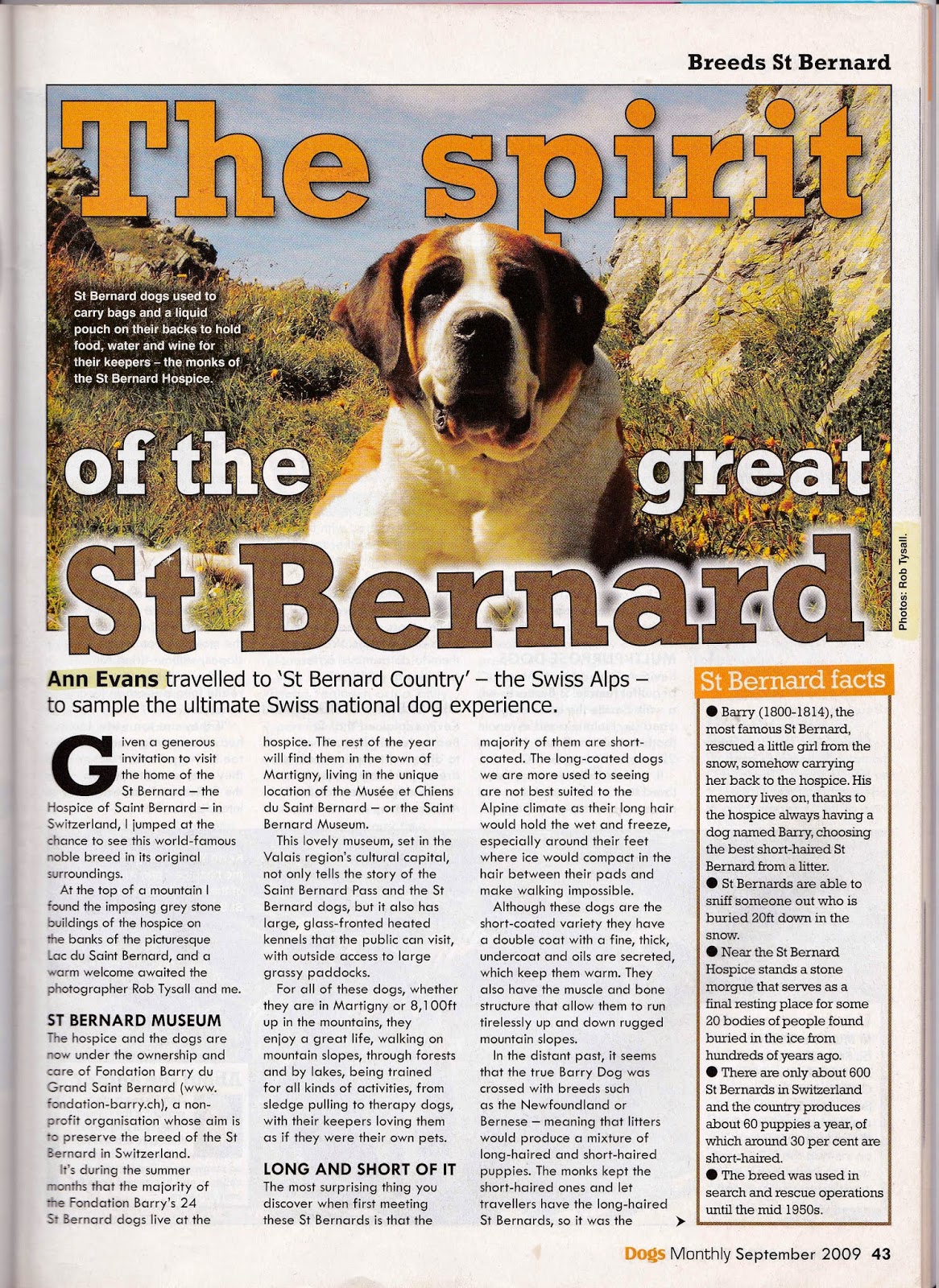 Since then, my output of canine themed articles continued to grow, averaging around one every month for many years and the topics have covered everything from canine charities to dog shows, from working dogs to assistance dogs, from rescue sanctuaries to famous dogs – you name it and I've probably written about it.

As well as the joy in writing about our four-footed friends, they have been instrumental in getting me swanning off to distant shores such as Switzerland to learn about the Swiss National dog, the St Bernard as well as taking part in a simulated mountain rescue.

I've been up in a helicopter with the army in Northern Ireland which was part of the sniffer dogs' training. I've been on a speeding police launch on the River Thames with the Thames Marine Police Dog handlers. To Scotland with SARDA search and rescue – where I got to experience being lost on the moors and rescued by a dog, and lots of other exciting jobs. 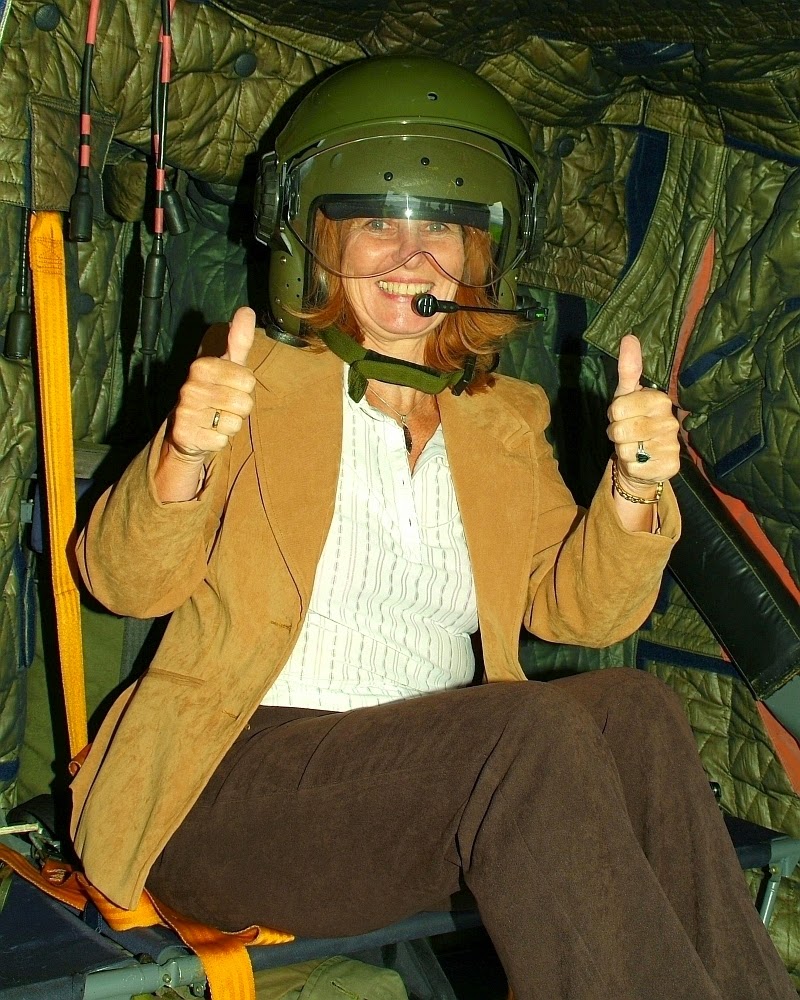 Over the 13 years I worked as a feature writer at the Coventry Telegraph, one of the most rewarding series of features I was responsible for was Pet SOS, where each week I would write about a particular local animal sanctuary, highlighting the plight of four or six homeless animals in the hope of finding them new homes with a heart-warming success story of a rehoming as the main part of the feature.

I recall the morning after the first Pet SOS article went out and the rescue centre we'd featured rang to say that a queue stretching right down their long driveway had formed of people interested in adopting a pet. One year Pet SOS even won the RSPCA Media Award.

Dealing with canine organisations in all their many forms is usually an uplifting experience. It's brilliant to see man and dog co-operating and working together for the benefit of others. Even stories about homeless abandoned animals has its warm side, knowing that there are rescue centres all over the country who provide good homes for strays and abandoned animals. They are the lucky ones.

But recently I've been interviewing and writing about a canine charity that deals with probably the most heartbreaking of topics. Dogs Theft Action. I caught up with them at Crufts last week and although I'd written about them some years ago, for some reason this time, the utter heartbreak of what they deal with every day struck home.

They exist primarily to help people whose dogs have gone missing or been stolen, and their website shows photograph after photograph of lovely family pets who have disappeared. The charity also promotes responsible dog ownership and offers general guidance on canine welfare, but their main focus is to help owners find their pets. And it's not just pedigree dogs that fall prey to dog thieves. Any dog can be at risk.

As part of my article on this charity is the happy conclusion to one woman's plight. Some years ago her house had been burgled and her dog taken. He was microchipped and she never gave up hope that one day she would get a call to say he'd turned up somewhere and been scanned for a microchip. That day happily came four years after he was taken – four years and 12 days to be precise. Her story highlights the necessity of getting your pet microchipped. Sadly for the owner of Hansum (below) the search and the waiting goes on, nine months since he went missing in Wales.

I'm sure many of you have pet dogs, and if you're anything like me, walking with your dog is the perfect way of plotting and planning your books, so I hope you don't mind me sharing these few pointers with you that will help keep your dog safe.

DOG THEFT – DON'T BE A VICTIM
My full article on Dogs Theft Action will be on www.b-c-ing-u.com on-line magazine within the next week.

Not to finish on a sad note, I've also been writing about Heelwork to Music recently, and looking back on interviews I've been lucky enough to have had with the two top Heelwork to Music stars in the UK. Namely Mary Ray and Richard Curtis, who you might have seen doing their amazing Air Force dancing routine at Crufts on Sunday.

Photographer Rob Tysall and I chatted to them a few years back at their homes, here's a couple of the lovely pics Rob took with Mary and Richard  making it look so easy.

Umberto Tosi said…
What a perfect example of following your bliss! As a writer and dog lover, I envy and admire you for pursuing and developing such a rich career informing people about the many wonderful things dogs do with, and for us all. You make the case for the co-evolution of our two species, each enriching and helping the other grow.
13 March 2015 at 09:15

Lydia Bennet said…
Great that you can write about your passion and have experiences through that! It's always interesting to find out more about writer colleagues' 'day jobs' especially writing-related ones.
14 March 2015 at 00:17

madwippitt said…
It's always great when you get to write about the things you love and feel passionate about! Can I please add a note to the warnings though - even if your garden IS secure (and it certainly should be if you let your dog loose in it)don't assume it is safe from thieves out to nab your pet. ALWAYS supervise your dog out there, in person - even if you can see him from indoors, if a thief thinks he is on his own he will be a tempting target. Worryingly, theft from gardens is on the increase.
15 March 2015 at 08:33