'How-to' posts and other helpful tips for indie publishers. 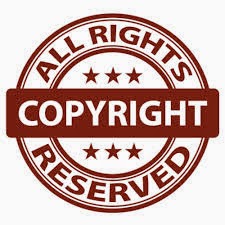 Some advice on the confusing matter of copyright

(Disclaimer: we are not professional financial advisers, and some of the following posts may now be out of date, so please always check current procedure with the relevant tax authority.) 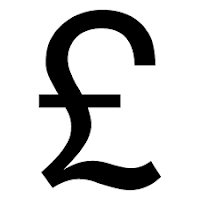 How not to pay US Tax on your Amazon earnings, if you're not American

Being a Small Business - Tips on self-assessment, tax, expenses, etc 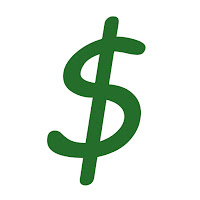 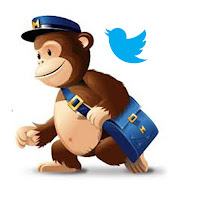 How To Plan Your Social Media Publicity Ahead

Free Resources Authors Can Use to Make and Promote Their Books...

How to use MailChimp to send out newsletters...

Links - how to insert them and shorten them

RSS Feeds - what they are, how to find them and insert them

How to Attract Search Engines to Your Blog

Nuts and Bolts of Producing a print on demand Paperback 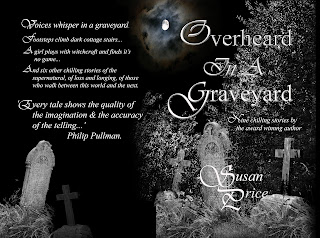 Publishing a paperback with Amazon's KDP

ISBNs - What they are, how to get them and why you should...

How to Publish a Picturebook with Createspace

Nuts and Bolts of Producing an Ebook

Pictures - how to insert them into an e-book

More advice on ebooks and illustrations

Epub format: How to proof it

How to Turn a Picture Book into an Ebook 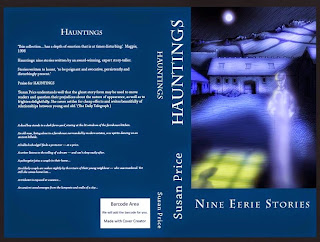 
Getting a cover designed and writing blurbs

The story of a cover - designing your own

What To Do After Writing The Book

Note: These articles were written before 2015, when the EU brought in new VAT rules that make selling from your own website or on-line shop much more onerous for sole traders, but if you're keen...

How to set up an on-line shop or store

Why you might set up an on-line shop or store

Audio books: creating your own

*
That's all for now folks, but check back soon as we add links to this section whenever we discover how to do something new.

What a strange and interesting world we in the media have created for ourselves, as we pick up characters and stories, some real, some fictional, and then exaggerate and distort them in order to hold the interest of our readers and viewers - or sometimes perhaps to amuse ourselves. One upon a time it was Liz Taylor and Richard Burton, then Princess Diana, Katie Price, the Beckhams, O.J. Simpson, Michael Jackson, the Kardashians and all the others who took their turns in the media mincing machine, sometimes as heroes, sometimes as villains. At the moment, it is Harry and Meghan who have had their pretty interesting personal story twisted, inflated and turned into an intellectual property which will, no doubt, generate billions of dollars for the global media barons, before it has been sucked dry of all possible new angles, and the public has grown tired of them. (Some of us are old enough to remember a time when both Prince Charles and Prince Andrew were depicted in the media as d
Read more 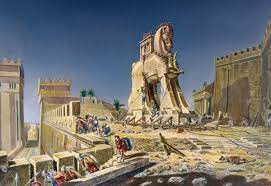 You've gotta give it to the ancient Greeks. They pulled a sweetheart of a trick thousands of years ago, so sweet we still remember it. In fact, we have a phrase for it: Beware of Greeks bearing gifts . Gifts like a giant wooden horse given to a city...and rolled in with armed troops inside it. Troy fell because of that but the horse will live forever along with our awe of Greek cunning. What might happen, you might wonder, if the gift could be reversed--and a well-meant, beautifully wrapped gift arrived...and was received as bearing grease ? Grease in the sense that the gift is seen as smeared with ambition, deceit, and base pride. This actually happens too often. Because of the volume of spam and links meant to hack us not give us a thing, we've all grown jaded and suspicious. And few things set our teeth on edge like a slick trick from a half-witted writer. It could be someone you've just befriended on Facebook. Within minutes, you receive a gushing, greasy email: Dear Fr
Read more

Our Fathers: Or, How One Thing Might Lead to Another by Julia Jones 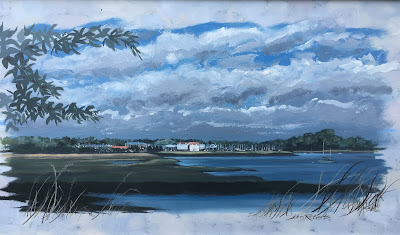 The River Deben from Kyson Point by John Roberts I edit a small, local, bi-annual magazine for the River Deben Association in Suffolk. It’s the river’s parish magazine so (in the manner of parish mag editors) I take as much time and trouble as if it were Country Life or the National Geographic .  My son Bertie manages the layout and we publish articles about birds and boats, people and paintings, saltmarshes and seawalls. I realise now that I was destined for the Deben from the day that my father (to be) returned from his RNVR service in World War 2 declaring that he never wanted to go anywhere else. So he set up a yacht agency. Less than two years later, my mother (to be) found her way to the river wanting to buy a boat… Skip along a few more years and a larger boat was purchased as my brother and I were demanding more space. Enter Peter Duck. In 1960 a young artist named John Roberts arrived in Woodbridge on the River Deben, planning to buy a boat and sail away. He was dreaming
Read more 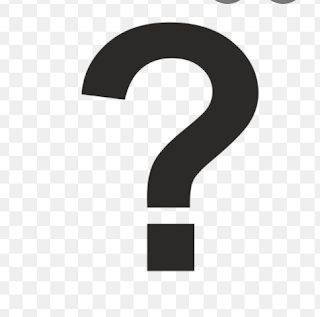 I have been teaching again. I talk a lot about brevity. I go on (at some length) about being succinct, getting to the point, not getting bogged down in needless waffle, unnecessarily verbose syntactical constructions and mindless repetition.   I am not someone who has ever found myself hidebound by my own advice, but lately I have been writing poetry and I now discover that I find a thirty two line sestina too prolix. When I move on to writing a story, I am hacking back so much that I think I am in negative word counts. Perhaps if I carry on this way I may dispense with words altogether and simply write: '?'  I am sure it is temporary and I will recover my appetite for verbosity shortly. In the meantime: '?'
Read more