I know I’ve already used the title word as part of a previous blog, but recently, the phenomenon has recurred quite strikingly and so I think it’s worth stressing as a useful writing tool. Not that it’s something one can control – such as hitting the right keys, choosing a winning strapline, making sure one’s characters remain consistent, etc. – but it’s important to recognise and exploit it when it happens.

Don’t get me wrong. I’m not going all mystical, conjuring up spirits, relying on getting access to umpteen alternative dimensions or whatever, I’m simply recognising as a fact that, when researching and writing fiction, ‘real’ information can be much more than mere content.

Recently, rather than being content to sip my Horlicks, prune the roses, do the odd bit of carving and wonder whether I should feel fortunate or damned to have survived long enough to endure the current woeful crop of nonentities and/or rogues who ‘lead’ us, I’ve responded to the suggestion of a few friends that my two historical novels need to become part of a trilogy. OK, why not? It means I get to sit down more and spend time with people of my own choosing (and making for that matter).

But I don’t want to be repetitive and the first two books covered several different areas of interest (for me, anyway) – early 19th century life, two different ‘crimes’, a travelling theatre troupe, shipbuilding, figurehead carving, a sea voyage on a square-rigger, and – to my surprise – a love story which led not to marriage but to an (unusual for the time) ‘understanding’. 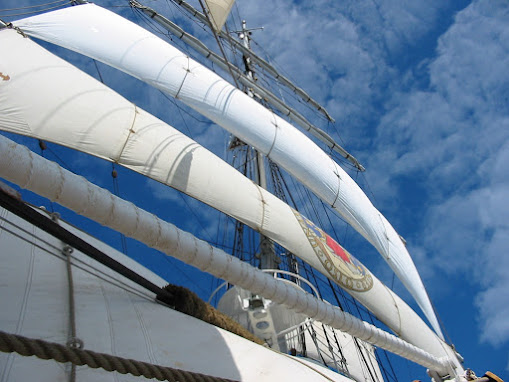 Then my brother, who works at the dockyard in Plymouth (or, more correctly, in Devonport) asked whether I’d started on the book and it struck me that one way of freshening the whole thing would be to move my principal characters from North-East Scotland to South West England. I was born and raised in a fishing community in Plymouth but my lack of knowledge of its 19th century history is comprehensive, so I could also delay starting to write anything by doing lots of interesting reading.

And, at last, I’ve reached the point of this spiel.

Why should this couple of lovers, he with a secure figurehead carving business, she just beginning to play a part in her wealthy father’s shipping company, up sticks and move 600-odd miles to be among strangers in an unknown context?

But that’s what I wanted them to do, so I started my research and serendipity kicked in.

iron ships started taking over from wooden ones, and few of them carried figureheads;

steam engines and the screw propeller were invented, so sails were no longer the only way to move ships;

cargoes of timber became less important than moving emigrants – especially across the Atlantic, so (West Coast) Plymouth was better placed than (East Coast) Aberdeen to benefit from the changes;

the growth of the railway network made it cheaper and easier for emigrants to get to Plymouth;

the Suez canal made passages to India far shorter, but not for large sailing ships;

Devonport was more or less the home port of the Royal Navy;

In other words, not only did the research start answering my questions about facts, it also started providing motives for some of the decisions the characters had to make and reasons for changes that were forced on them by circumstances.

In fact, the research is providing so much in the way of diversionary information that I can put off actually writing the book even longer. Which I think is what the commercial people for whom I used to write stuff would call ‘a win-win situation’.

Joy Margetts said…
I love this. As a historic fiction writer I found a real family of nobles who just fitted in right with my story of a medieval knight fleeing his past and his family - they even had welsh connections with Llewellyn the Great, who had connections with the Abbey I wanted to use as my base - serendipity all over the place. And of course HOURS of lovely research... and rabbit trails, and procrastination!
7 June 2021 at 11:48

Eden Baylee said…
Ha Bill, research is fun, but I'll hold you to a writing schedule. You can do both!
eden

Bill Kirton said…
Thanks Jan. As soon as I receive your deposit, I’ll stop reading and start looking for my pen.

Thanks Joy, I’m glad I’m not alone. Your own serendipities illustrate very well exactly what I’m talking about (and you’re honest enough to acknowledge the procrastinating bit, too).

Thanks Eden, but I refuse to be ‘held to a writing schedule’. I’m an artist. Ask Jan, he’ll confirm it.

Umberto Tosi said…
From one veteran of research rabbit holes to another, good luck! I look forward to your latest epic when it comes out.
7 June 2021 at 22:28

Bill Kirton said…
Thanks Sandra and Umberto, your words seem to insist that I write the damn thing now. (But praise from you makes it definitely worth it.)
8 June 2021 at 14:05

Reb MacRath said…
Brilliant job, Bill. Once you made your decision, you freed Lady Luck to goose you and shower you with research blessings.
8 June 2021 at 23:41