The Bottom Syndrome by Misha Herwin 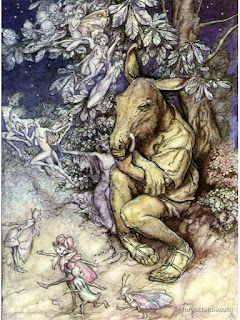 A “Midsummer Night’s Dream” is my favourite Shakespeare Play, I’ve acted in it, produced and directed it and seen countless versions on stage and screen. One of the many things I love about it is the play the mechanicals put on for Theseus and Hippolyta’s wedding feast. I still laugh at “The Lamentable Tragedy of Pyramus and Thisbe”− especially the scene with the Wall. The humour may be slapstick, but there is an element of satire too. Shakespeare is gently mocking fellow actors and their need to be centre stage.

When Quince casts Bottom the Weaver as Pyramus, Bottom is, at first, delighted to be given the lead role, but as each new part comes up he thinks he’d like to give that one a try too

“An I may hide my face, let me play Thisby too, I'll
speak in a monstrous little voice. 'Thisne,
Thisne;' 'Ah, Pyramus, lover dear! thy Thisby dear,
and lady dear!'”

Basically Bottom wants to have it all.

Now I’m not saying that I too want to play every part, but there is a streak of what I call the Bottom Syndrome in me too. Basically I write Women’s Fiction and Children’s Books, but I am constantly tempted to have a go at other genres. I want to be a SF writer, a writer of thrillers, especially the dark and twisted ones and who’s to say I wouldn’t be good at writing lovely light uplift stories of Cornish Christmases and cake shops.

Maybe it’s the temptation of trying something that is currently doing well, that what I really want is the success, to achieve stardom like Bottom, or if I’m being kind to myself, it’s my creativity playing with ideas. Whichever it is common sense demands that I stick with what I know I can do and hone my skills in those genres rather than starting something completely new. On the other hand…

Peter Leyland said…
Try something different Misha. I tried so many different teaching roles from infants to undergraduates and learned something from every one. It's probably not a fair comparison but teachers are actors too.
11 June 2021 at 11:56