After the popularity of NailYour Novel: Why Writers Abandon Books and How You Can Draft, Fix and FinishWith Confidence, Roz Morris is now making good on her threat to write a second Nail Your Novel book.

This month we’re joined by respected Crime writers, Bill Kirton and Chris Longmuir.  Look out for their first blogs.

The big event in the indie literary world this May was the first ever National Flash Fiction  Day, on May 16th, whcih saw real life and online events across the UK and beyond. And Ealectric Authors were right in the heart of teh action. Festivities kicked off in Shrewsbury with a wonderful event run by Pauline Fisk - there's a full report here and a fabulous video here. 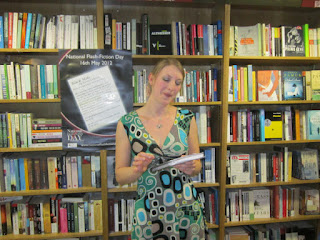 (Anna Hobson, whose piece of flarf at Oxford's Flash Slam! was the highest scoring of the night)

And COMING VERY SOON electric author Dan Holloway will be hosting his show The New Libertines at 3pm this Sunday at Stoke Newington Literary Festival. He will also be recording his spoken word album Last Man Out fo Eden at a free live show at the Albion Beatnik Bookstore on June 8th and competing in the final of the Hammer and Tongue poetry slam final on June 12th.