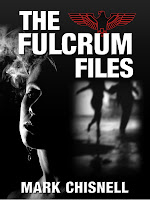 One of the things I've learned so far about this writer gig is that you have to keep the books flowing... I published The Fulcrum Files back in the winter (the writing of it was the subject of an earlier blog). But I wouldn’t be a real writer if I didn’t already have the next one on the go. I’ve already added a page to my website for Powder Burn, which I’m hoping to finish for January next year - or, maybe February...

And so it’s time to start thinking about ideas for novel number five. I’ve decided to go for a series, kicking off with a sequel to Powder Burn. The main reason for this is that I just love the main character in this book, an American girl called Sam Blackett; here’s a little bit of Powder Burn that will give you a feel for her character:

She looked back down to the screen and the single email in her inbox. She’d sent out twenty-five more query letters to different newspaper and magazine editors just after she’d arrived in the city. All with ideas for travel stories. Score to date: zip for fourteen - all rejections. And the single email that glared back at her this morning? From her mother. Two months in India, nearly a month now in the Himalayas and only one story sold: to the Vermont Gazette, where her mother job-shared as office manager with Penelope-from-across-the-road. And she’d told this guy and his two mates that if they let her come with them, she would write up their expedition for Adventure magazine. She hadn’t thought they were serious. She had about as much chance of placing a story with Adventure as she did of winning a Pulitzer. Still, he wasn’t to know that. She glanced up, and caught Pete’s gaze for a moment...

In Powder Burn, Sam starts out as a spectacularly unsuccessful freelance journalist, gets herself into a whole world of trouble, somehow gets out of it intact - and with a helluva story to tell. It’s the break she needs for her writing career, and the idea of the series is that we follow her through various adventures and scrapes in pursuit of the next story.

The $64 million dollar question is... what story is next?

Like many writers I keep an ideas folder on my computer, and unlike most writers mine’s stuffed full of badly written paragraphs about a news item, or the thesis of a book, or just a couple of lines from a non-fiction account of something that interested me. This is where stories come from, or at least, it’s where my stories come from.

So, my plan is to work through some of those ideas on my own blog, testing them out as stories and seeing where they might go. And I thought I might give idea number one a run-around-the-block right here - and hopefully, get a little feedback.

The plot would find Sam in Fiji, trying to warm up after the Himalayan Powder Burn adventure. She’s been cruising around the islands for a few months after the success of her story and her career is starting to roll.

Then she bumps into an old friend from the States, he’s skippering a boat on a search for the perfect wave. A rich investor has hired him to do up the boat, and skipper it on a voyage through the Pacific Islands. They are looking for a place to build a hotel, a hotel with five star service and access to a completely empty, and perfectly ride-able wave for well-heeled amateur surfers. Scenting a story, Sam agrees to join him as a deck-hand and off they go... 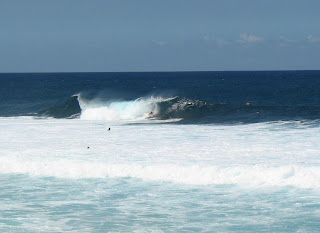 What she doesn’t know is that the boat was bought very cheaply from the Singapore authorities, after they had confiscated it from a local criminal. He was using it to run drugs and girls out to the frustrated crewmen stuck on merchant ships, and awaiting their turn in Singapore’s massive container terminal. And what no one knows is that there’s still a huge stash of drugs hidden aboard the boat. Inevitably (this is a thriller), the drugs come to light at the worst possible moment...

And that’s the set-up – originally I thought the drugs would be found after they were wrecked on an island. The story would then go the way of a descent into madness and survival, a la Lord of the Flies, or Conrad’s Heart of Darkness. But now I’m thinking there’s also potential for a more conventional suspense thriller – a chase story, as the drug dealer comes after his boat and his stash.

The only problem is that this is territory I’ve mined before. The Defector is all about a boat chase and a struggle for survival. So maybe I’d be better off looking for a more conventional plot idea, something urban, something different from adventure in exotic places.... back to the drawing board, then... or not, what do you think?

Any feedback is much appreciated, and you can find me online at:

julia jones said…
Well, speaking as a Fulcrum Files admirer, you do do a mean chase scene. My older boys and I spent several happy years hooked on Sam Llellyn's marine thillers and have been looking for more of the same ever since ... so that's three readers!
3 July 2012 at 14:39