I’m lucky in that I have two brothers, Andrew and Adam, who are both talented artists. Andrew Price, designs most of my indie-covers.
Here's a round-up of PriceClan projects just now.
We've re-issued my successful picture book, The Runaway Chapati. As with The Wolf’s Footprint, people (especially teachers) were forever asking me where they could get copies.


‘Chapati’ is The Gingerbread Man with added spice. I asked my brother, Adam Price, if he’d like to illustrate a new edition. And here it is. 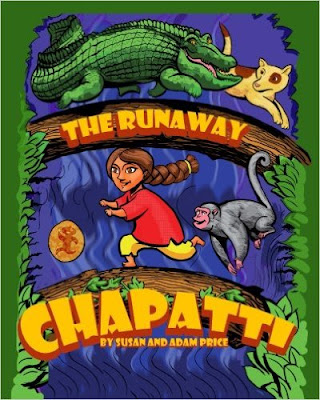 I asked Adam to make the pictures vivid, and he drew inspiration from his love of India and its colours.

The chapatti’s nemesis is a tiger, not a fox — and here is a sketch for Adam’s wonderful, springy tiger. 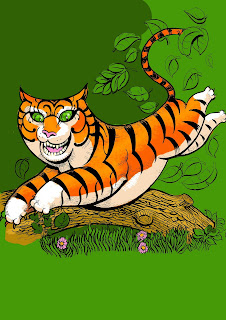 The book is excellent for early readers, with its repeated words and sounds. (It was originally published as an early reader book.)

Copies signed by the author and artist are available from my website.

Adam has also written and illustrated his own picture-book: Tinku Tries To Help. 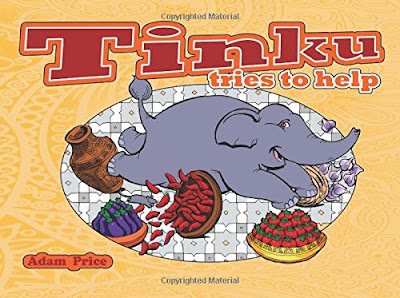 ‘In the shadow of the mystical mountains,

Deep in the tiger-haunted jungle,


Stood a city of flowers and fountains,
That was home to the marvelous Mogul.

In his palace of marble and jade,
With domes and spires of golden glory,
Tinku the elephant lived and played.
Now listen as I tell her story.’

Told in rhyme, it’s a tale of a little elephant who tries very hard, but with more enthusiasm than skill, to help with preparations for the maharajah’s wedding day. The story's end end is full of love, and has a surprise which sends the readers back to the beginning to search every page of the detailed and colourful illustrations.
I can only say I’m jealous. I wish I had written it.
It’s ideal for snuggling up with a small person while looking at the pictures, and laughing at Tinku’s mishaps.
It’s available as a paperback from Amazon — or, for a little extra, you can buy a signed copy from my website, dedicated to your own small person.
Tinku Tries To Help, paperback          UK   USA
Signed copies from my my website:


PriceClan Publishing seems to be going into picture books in a big way – well, with two artists at hand, why not?
Brother Andrew and I are working on a picture book of Billy Goats Gruff – though we’re meeting lots of problems. We will get there.
Andrew has used a comic strip approach — here’s a sketch. 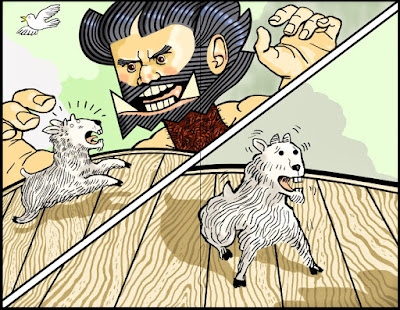 The story will be told with speech-bubbles and sound effects. Like The Runaway Chapati, it will be an effective aid to teaching reading, with lots of repeated words and sounds. ‘Who’s trip-tripping across my bridge?’ As with a comic, 'trip, trip, trip' will be written under the goat's hooves.


Despite set-backs, we still hope to have the book on sale for Christmas.


Finally, I’m working on my book Follow The Dogs, which will be my first entirely original self-published book — all my others are re-published back-list books.


Follow The Dogs is based on my reading about the drovers’ dogs who accompanied their masters as they drove cattle to market in the late 18th and early 19th century. The cattle had to be walked slowly, so they wouldn’t lose weight, and by the time they reached market, the harvest was ripe. So the drovers stayed to earn extra money by helping with the harvest. However, the farmers they worked for didn’t want the herd-dogs around their farms.
So the drovers told the dogs to go home by themselves — and they did! The dogs walked by themselves, sometimes for hundreds of miles, to reach home. They were fed at drovers’ inns along the way. Later, when the drover made his own way home, he paid the inn-keepers for the dogs’ food.
My book tells the tale of a boy escaping from bad treatment who falls in with a couple of drover’s dogs, who adopt him. Having nowhere else to go, he decides to follow them to wherever they’re going — with a desperate hope that, like a stray dog, he’ll be taken in wherever it is the dogs call home.
Brother Andrew is teaching me to use a graphics programme so I can design the cover. It isn’t easy — but with Andrew’s help, I’ll manage it. Here’s an early peek at the work in progress. 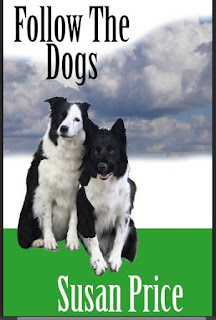 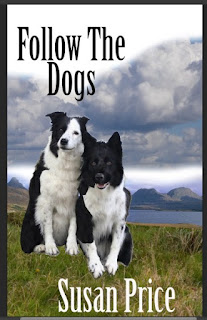 In the book, one of the dogs is almost entirely black, but I couldn’t find a modern photo of a black collie, so part of what I’m learning with the graphics programme is how to make a mostly white dog mostly black.

Finally, my book, The Wolf’s Footprint, is still selling steadily in its new PriceClan edition. It begins, like Hansel and Gretel, with children being abandoned in the forest. 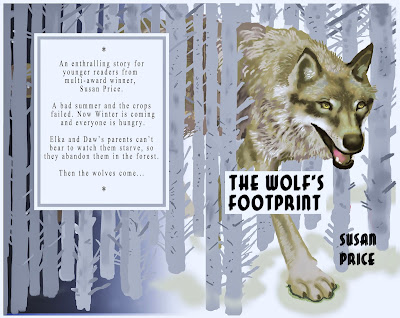 But there is no witch. Instead a wolf-pack appears…


When the book went out of print, I had many, many emails from teachers asking where they could find copies. I put the few I had up for sale on my website – they were bought almost immediately.


So I commissioned my artist brother to produce new illustrations, and republished it as a paperback.


It’s now available as an ebook and a paperback.

What a wonderful project, Sue. Great books. My own little effort at a private imprint, Joslin Books, is really puny by comparison but it gives me enormous satisfaction even though it's barely disturbed the sales charts. Apart from that last feature, I expect - no, I can see - that it's just the same for you. Your covers look super. I wish I could do my own like that instead of depending on others. Is there a really, really simple graphics program for idiots anywhere?

I think I've expressed my envy about you having such talented and cooperative siblings before, Susan. The covers are terrific (especially Chapati). I've got 12 children's stories in need of illustrators and 2 very gifted artist-nephews but I've yet to succeed in achieving the fusion you've found. Good luck with the excellently-named PriceClan Publishing.

Go Price clan publishing! I love the fact that your covers are designed with original artwork - so many covers these days are photoshopped. Many of them are beautiful, but somehow impersonal and samey. Good luck the new project!
.

Thanks all - and Bill, good luck in nephew-wrangling.
Dennis - I wish I could say there's a really simple graphics programme, but even with my brother's help I'm finding graphics fearsomely complicated. Even he admits that he doesn't understand or use half of it.
I think I've got it - and then, next day, find that I haven't at all.

What a hive of family industry! All brilliant stuff, an inspiration to us all.

Brilliant! All the luck in the world with the family enterprise!

What awesome industry and co-operation! I love the unique look of your books. My little Five Lanes Press gives me great pleasure and satisfaction too, and my latest book, When a Writer Isn't Writing, is the first one I've taken straight to self-publishing.