The Raw Wonder of Word Rage in Scotland--Reb MacRath 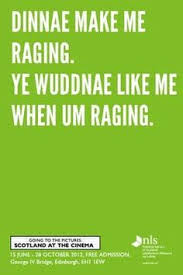 No one can cuss like a Scotsman. Or produce comparable musical pow. We may not always understand it (non-Scottish viewers of Trainspotting understood on average 3.5% of the dialect and no one understood more than 5.2%). And yet we are enthralled by the music, the vigor, the volume, the force of whatever it may be we've heard.

Tourists may turn to cheat sheets like this for basic, cleaner Scottish slang:


But there's no way to prepare for the explosive impact of off the cuff Scottish invective. The good news is no help's required for us to be blown through the backs of our chairs; in our bones, we understand. Witness the Scots' rise to glory in their improvisational rage against Trump's Brexit Tweets:

And gloriously on and on.

Now, the U.S. is famous for road rage, the spineless sport of things. But Scotland has given us word rage and it's the spine-tingling sport of kings. A few of the above Tweets are in the same league as Pele's doing a double back flip to kick the ball home for a score. Or watching Jackson Pollack impulsively choosing which bucket to splash. And we'd no more think of asking what jizztrumpet or shitgibbon actually mean than we would of asking Pollack why he threw blue there, not red.

There should be signs surrounding invective-izing Scots:

I find Scottish word rage refreshing because too often, over here, one thing substitutes for wit:

The F-word appears only twice in the examples above. In the best-known example--'You witless fucking cocksplat'--it works because it's sandwiched between the elegant word 'witless' and the insanely brilliant 'cocksplat.' In other words, the f-word was an effective accessory adding emotional punch--but the joke did not depend on it. Compare this with what subs for wit in the average Tarantino-style dialogue, every zinger hammered home with a half-dozen F bombs. We get dabs of honest wit served up on yards of toilet paper. 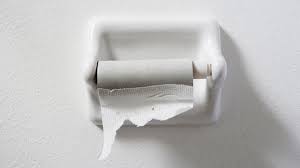 Oh, the American South has it wonders and charms:
--"Slicker than snot on a doorknob."
--"Nervous as a long-tailed cat in a room full of rockin' chairs."
--"All hat and no cattle."
--"Madder than a wet hen."
--"Well, scrape me off your shoe and call me sticky."

And all lands, no doubt, have their regional gems.

But today let us kneel and bow to great red-throated roarings from Scotland.

Jan Needle said…
Couldn't agree more! Wonderful. I'm quite fond of some (English) English ones as well, though, even if they're milder in intent. 'Pissed as a pudding' was a childhood favourite. It wasn't in Enid Blyton, though.
12 July 2016 at 09:20

glitter noir said…
Thanks, Jan and Bill. Good to know you're not too shy to rally round the flagpole. Pissed as a pudding, Jan, really is terrific.
12 July 2016 at 14:04

Fran B said…
I'm Scottish and I do find when I start to write dialogue in Scots that it finds its own pace and inventiveness very quickly. It's partly growing up hearing it, partly just in my DNA. And it's not only rage that brings it out. All sorts of emotion does.
12 July 2016 at 16:27

Catherine Czerkawska said…
I've never, in all the many years I've been living here, heard the word 'barry' meaning fantastic - or anything really. Must be from a different region to this one. Maybe somebody can confirm! Some words are very region specific - for instance people in Ayrshire call their kids 'weans' rather than bairns and I always think of baffies as belonging to the east coast more than the west. I agree that Scots is a brilliantly inventive and vigorous language though, for insults and everything else. One of our islander friends has a whole vocabulary of expressions for size and quantity of drinks (usually whisky of course) beginning with a 'waft' or a 'threat' and ending with a 'darkening'.
12 July 2016 at 19:01

Jan Needle said…
i sailed on an aberdeen trawler once. young men, boys, or sons were 'loons' and women (none on board, of course) were 'quines'.
the captain was 'the mannie'. god knows what they called me, a 25 year old idiot from england. but they were very kind.
13 July 2016 at 09:53

glitter noir said…
Catherine, I too am delighted by the use of 'darkening'. That's something to think about it, isn't it--a darkening of carrot juice.