What is the future for the book outside Europe? Post-referendum thoughts from Kathleen Jones

Oh dear, the #B word. Brexit.  After the initial shock, I've been trying to think about how it's going to affect my particular trade, writing and selling books.

Our literary relationship with Europe has been a bit rocky in recent decades, partly because of the language barriers.  Much easier to look across the Atlantic to that powerhouse of writing and publishing, the USA and Canada, and further afield to other English-speaking cultures, than it is to look at our near neighbours.  As a result we know less about the French, German, Italians, Spanish, Scandinavians etc than we do about more distant cultures, and I'm not alone in wondering whether this has anything to do with the referendum result. If we don't read their books, we don't know our neighbours very well.  According to editor Meike Ziervogel, of Peirene Press, we need to engage more with 'the narrative of strangers'. After all, they're only strangers until we get to know them.

Meike was asked by the Society of Authors to think about the forthcoming referendum and how it might affect the exchange of literature between Europe and the UK.  Her thoughts are very interesting.  Basically, a society that reads together, stays together. 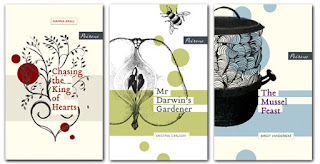 We need to read more European literature - we read less of it than at any other time in history.  Apart from a few Montalbanos, Umberto Eco, the occasional Elena Ferrante, Suite Francaise and some Nordic Noir, most of us would be hard put to name more than one or two contemporary big name literary authors from across the channel.  Meike should know, she publishes them.

Of course translation is the problem.  Meike has this to say:

"Recently an English novelist friend confessed to me that she doesn’t enjoy reading contemporary foreign literature in translation. She finds that, in comparison to English novels, translated books are often marked by impoverished language and stilted narrative. My friend is not alone. I have heard this argument from other readers before. Moreover, I can see where they are coming from. Because English possesses a larger amount of vocabulary than most other languages, our novels tend to be wordy. And because of the straightforwardness of the basic English syntax – subject, verb, object – English fiction writers are gifted in producing compelling, linear narratives. After all, the syntax influences how we organise reality.  It is therefore no surprise that a stark Finnish drama or a French novella where no word should be taken at face value, can present a challenge. . ."

Spending time in Italy and travelling around Europe I'm always ashamed at the number of Europeans reading books in English.  I don't read fluently in either French or Italian and stumble my way through books with the assistance of a dictionary, so if a book isn't available in translation I tend to leave it on the shelf.

Given how English Language-centred our reading is, Brexit probably won't affect what's in our bookshops much.  It's more how any decline in our economy will affect the publishing and book-selling industries.  The Big 5 already have financial problems.  As Indies we should avoid these hiccups. Each of us is a small business trading internationally and a weaker pound will make our books more attractive to buyers abroad.  As readers, books not published in the UK will become more expensive. Any downturn in the economy will also mean we sell less books at home, as people cut their spending. So, it's a mixed outlook.
What I do lament is the opportunity to grow a closer relationship to European culture - their literature is rich and very different to the UK model taught on creative writing courses. We need that input if our own writing isn't to become inward-looking and boringly predictable. Many of our greatest and most innovative writers spent time in Europe, reading European literature and imbibing new ideas - DH Lawrence, Ezra Pound, Elizabeth Barrett Browning, Byron, Shelley, Mary Shelley, WH Auden, Katherine Mansfield, James Joyce, Ernest Hemingway, Scott Fitzgerald, Gertrude Stein, Nancy Mitford, Edith Wharton ....  these are just a few names off the top of my head.

I'm a Peirene Press reader - grateful for the opportunity to read some of the best of European literature in translation.  It's full of  experiment and new ideas, new perspectives.  I can recommend 'Portrait of the Mother as a Young Woman' by Friedrich Christian Delius, 'The Brothers' by Finnish author Asko Sahlberg, and 'Mr Darwin's Gardener' by another wonderful Finnish author Kristina Carlson.  I would be very sad if Brexit means that this exchange of literary ideas across the channel becomes more difficult.  Already only a trickle, it could be easily blocked. We're not just writers, we're creative artists and creativity should be without boundaries.

Meanwhile there's a burgeoning market in books on how to survive Brexit.  Never pass up an opportunity - Get writing!

Kathleen Jones is an novelist, biographer and poet publishing on both sides of the fence.  She can be found at www.kathleenjones.co.uk  blogging at A Writer's Life, on Twitter incognito as @kathyferber and wasting time on Facebook here.   Her latest book is the travel memoir of a life-changing trip to the Edge of the World, the islands of Haida Gwaii off the northern coast of British Columbia.

Interesting perspective and extremely true. If it is possible to be extremely true that is. I have read several books in translation but these tend to be crime books. I agree they can seem somewhat stilted compared to UK books, but I think things are improving. As to reading in another language, Imwouldnt even know where to begin. Great post. Thanks

I try to read something by a local author wherever I go, and my local independent bookshops is great at finding them for me - but always in translation. My languages simply aren't good enough to read in French or Spanish.

I feel very lucky that, probably because I was a good mimic and could therefore manage a fair accent in French, I got nudged into languages and spent my entire working life reading, lecturing on and discussing French literature. Its phases and movements are so clear, so distinct, its rhythms so subtle, its versification so strict and the inflexible diktats of the Académie such clear invitations to rebellion. And, while I admire the work of the great translators, their job is almost impossible. It's cultural suicide to separate ourselves from the riches of Europe.

Thanks for this, Kathleen - in a challenging time we need something to work on. Perhaps it is time for all of us to engage in some adult education. I'd love to develop fluency of nunaced reading in another language. My French is woeful, and other languages restricted to restaurantese.

Bill, I admire your fluency in French - my A level variety can't compete! I can usually understand the sense, but the nuances remain invisible. Like Jo and Elizabeth I struggle. And even if I learned to be fluent in Italian and French, what about other languages with wonderful literature - Scandinavia, Spain, Germany, Russia . . . Wendy - I do so agree with you on translations. So much depends on the translator. Peirene Press have some wonderful ones and it does make a difference.

Yet, when I read that same literature in its original language it is beautiful, different and worth engaging with. I do this becaue I can and because I do this I feel myself to be more European than British. What has just happened is an enormous blow for me
There is something rather distasteful, I think, about having a close relationship with a continent a long way away and ignoring a rich and diverse culture on our doorstep. Ironically, we've look like losing an important trade agreement with the US because of Brexit.It's important for us and for the rest of Europe. (We haven't left yet).It's probably important fo the whole world.
There was an EU directive back in 1988 that all EU individuals should speak three community languages up to an operational level. Oh that we hadn't ignored that because this post then would not have been possible.
I do think English (UK Enlgish) literature is the best in the world BUT that doesn't preclude some other material being very good indeed and worth reading.
Sharing a common language with the States? Think again. It isn't as close as you might think and I feel far more comfortable speaking French in France than I do UK English in the US.

'I do think English (UK Enlgish) literature is the best in the world BUT that doesn't preclude some other material being very good indeed and worth reading.'

My, how narrow-minded and arrogant, Gill.

Goodness Lee, are you saying that Shakespeare is only a second rate hack?

Madwippitt, exactly how you conclude that from my statement is puzzling.

Gill gives it as her personal opinions ['I think..'] that English literature is the best in the world. She doesn't state it as a fact. She's entitled to that opinion as much as you're entitled to challenge it.

ladies, ladies! you sound like boris and govey! and while no one thinks shakespeare's a second rate hack, surely no one thinks modern english novelists reach the heights of our american cousins? churchill used to go further, and say the english language is the best in the world think about it. what an utterly absurd thing to say.

Yes, I am indeed entitled to think that such an opinion is a disheartening example of narrow-mindedness and arrogance -- and very possibly ignorance, for example of Spanish, Arabic, Greek, German, Chinese, Japanese literatures -- to name just a few.

Gill's opinion is a perfect example of an Anglocentric worldview, which is not helped by the dominance of English as an lingua franca. Kathleen is absolutely right that the UK literary model is far from the only one, and some of our best writers in English have translated for themselves as an excellent means of enriching their own writing.

For those interested in an addition to Kathleen's suggestions:

http://www.dalkeyarchive.com/product-tag/best-european-fiction-series/
Though the series is inevitably uneven, and there are some notable omissions, the Dalkey Press's Best European Fiction series is a place to begin, particularly if you enjoy short stories. Which still leaves the rest of the world ...

Ahhhh ... if you enjoy short stories, perhaps you might enjoy our latest offering, Another Flash in the Pen?

BTW, Susan, I do not agree that someone is automatically entitled to their opinion. There are opinions and opinions: take racism, for example.

I'm not sure why the referendum result would make anyone less likely to read European books or indeed books set in Europe. I'm just about to start a binge of travel books about trips made across it e.g. Paul Therox's The Great Railway Bazaar and Patrick Leigh Fermor's travelogues. However I've found a more recent book very enlightening and topical, just rereleased and updated post-Brexit, which I definitely recommend (and not just because I'm one of the reviewers quoted inside it!) https://www.amazon.co.uk/Eurovision-History-Through-Greatest-Contest/dp/0993414990/