AN INSPIRATIONAL WEEKEND By Ann Evans

They say that inspiration is all around us, and if any of you have taken part in your local Heritage Open Days run during September by the National Trust, you're probably buzzing with new ideas.

Here in Coventry, the Heritage Open Days weekend began on Friday with the city celebrating 1,000 years of the birth of Coventry.

As many people know, Coventry is famous for the story of Lady Godiva, and the city is so fortunate to have its own resident Lady Godiva. A lovely lady named Pru Poretta who has taken on the role for the last 30 years or so and is a real ambassador for the city.

On the Friday of the Heritage Open Days, Pru headed a multi cultural procession from the town centre to the new cathedral for a ceremony which included the unveiling and presentation of a unique Travelling Tapestry, created and inspired by hundreds of people.

The weekend allowed the general public to go behind the scenes to dozens of normally private places and see parts of Coventry they'd never seen before.

Being a local writer, you can usually get behind the scenes to most places if you want to write about them, but even so there were quite a few places that I hadn't seen personally – although I've mentioned them in two of my books.

One book being The Children's History of Coventry, a non fiction illustrated book which I'm happy to say is in most of the schools' libraries. The other is a YA time thriller called Celeste. Set in modern day Coventry and Medieval times, there's mention of Lady Godiva and her monastery; the quirky clock made in the 1960s which has a wooden Godiva on her horse, coming out on the hour, every hour. And there's mention of the cathedrals, both old and new.

I always think that one of the fun sides of writing, is when you take something that is factual and weave your fictional story around it. Not changing history, but providing some new twist as to what could have happened – and may still happen.

In Celeste, Megan is being haunted and terrified by Friar Lucius, an evil monk from the 12th century who has followed her through time from when she was known as Celeste, to try and retrieve something that he thinks she still has access to.
He whispers in her ear: Where did you hide it?

Let me introduce you to Friar Lucius:

He had found a way that he could, with the greatest of effort, summon up the mist, gather it in one arched doorway-shaped mass — and walk through it into the living world, returning the same way.
For now, he paced the empty dark corridors that had once been Godgifu's priory, oblivious to the majestic cathedral that had been erected overhead.
He walked, head bowed, his cowl shrouding his face, although his eyes bore through the black mist, forever watching, waiting…
Although true hope had died a long time ago, still a thread remained.
And a doorway…

Godgifu's priory (Godiva) was actually unearthed by The Time Team in 2002. Headed by Tony Robinson an excavation dig revealed the walls, pillars and archways of the 12th century monastery where Godiva and her husband Earl Leofric would have walked, lived and prayed. 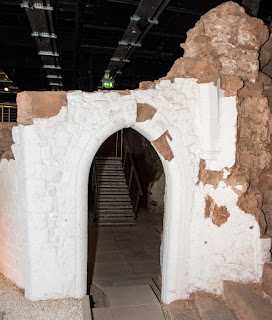 And this was the priory where my nasty Friar Lucius dwelled. So you can imagine how excited I was, to be able to go down into the undercrofts of the excavated priory at the weekend and see the actual remains of that ancient building – to walk the empty corridors and actually see an arched doorway. I almost expected Friar Lucius to step through and whisper in my ear....

Exploring the undercroft wasn't all, the Godiva clock which is also mentioned in both my Coventry themed books, was open for the public to go behind the scenes and see Godiva on her white horse – and Peeping Tom behind closed doors. It was fascinating – and inspiring. I started to wonder what those two got up to after the hour had chimed and they were back in the dark. I think I feel a short story coming on! 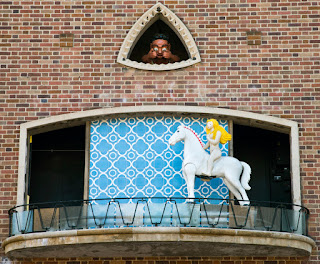 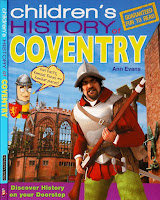 Has your home town given you inspiration?

Thank you Rob Tysall for the photos (www.tysallsphotography.org.uk)