Words with extra relish, please – and don’t forget the ‘beens’ - by Rosalie Warren

By Rosalie Warren - September 04, 2016
When I visited my two-year-old granddaughter Daisy a few days ago, I hadn’t seen her for about four weeks, and one of the things I noticed was that her speech has progressed enormously. I was particularly struck by her starting to use the word ‘been’. This word never gets much attention from adult speakers – it’s a taken-for-granted sort of word that even the most ardent grammarians pretty much ignore (can grammarians be ardent, I hear you ask. You’d be surprised). ‘Been’ is a bitty little filler word that pops up in constructions like the present perfect progressive (‘I have been looking at the flowers’) and its less common future variant (‘I will have been sliding down the slide’). Years ago, when I studied computational linguistics (trying to get computers to speak English and other natural human languages), I remember writing a set of syntax rules for parsing or generating speech – and wondering how on earth to classify ‘been’ – is it a verb, an adverb, a particle…? In the end, I just called it a [BEEN]. I think, strictly speaking, it’s best classified as the past participle of the verb ‘to be’, but that doesn’t really capture its role in constructions like the ones above. Calling it a [BEEN] worked out just fine – my grammar rules still worked.

Daisy has no such worries. She seems to relish the word ‘been’. One game we played this time, over and over, was ‘Daisy goes to look at the flowers’. The rules are worthy of one of the more obscure Olympic sports, so listen carefully. Daisy and Nana sit together on a step in the garden and suddenly Daisy announces, ‘Daisy going to look at flowers.’ She whizzes off towards the potted plants, stops, scrutinises and sniffs. Nana calls out, ‘Do the flowers smell nice?’ ‘Yes,’ says Daisy, heading back to me. Then she says, ‘Daisy been flowers,’ or sometimes, ‘Daisy been to look at flowers.’ Every now and then, Nana is asked to come and look at the flowers, too, but Nana mustn’t do that unless she’s been specifically invited or she will get Daisy’s resounding, ‘No! Nana sit.’ But the main thing to note is the ‘been’. Daisy gives it a lot of emphasis – it’s an important word. She knows, I’m pretty sure, that it signifies something that’s already happened. She has a grasp of the past tense and she’s tying it to the weird eccentricities of the English language that she’s been hearing since before her birth.

If you’re a Chomskyan (I mean his linguistics rather than his politics, though I’m partial to both), then Daisy’s Language Acquisition Device is churning away inside her brain, as it has been from her earliest days, ingesting all she hears, processing like mad, deducing parameters and slotting values into variables. She already knows hundreds (or is it thousands?) of words, and everything you tell her sticks like Araldite (oh, to be young). She knows a great deal of grammar – enough to understand a huge range of sentences, questions, commands and statements and to generate many of her own – brand new sentences that she’s never heard anyone say but that are perfectly understandable and often fully correct. By the time she’s four, her syntax may well be pretty much mature or, as we adults like to say, ‘perfect’.

Daisy makes me want to write. Hearing her handle words is like watching her wield a crayon – the joy is infectious. The pleasure of achievement; the challenge of new materials to explore. Though of course not everything in her life is fun. A scary encounter with a wasp that had the cheek to crawl on to one of her toys led to tears (thankfully not a sting). Nana’s pathological terror of these creatures didn’t help. The adventure was soon turned into one of Daisy’s stories. While getting ready for bed, she kept saying, ‘Daisy tozzawas,’ which we realised was ‘Daisy touched a wasp’. This was followed every time by ‘Daisy’s OK’. Succinct, highly emotionally charged, with a reassuring ending. Move over, Peppa Pig. 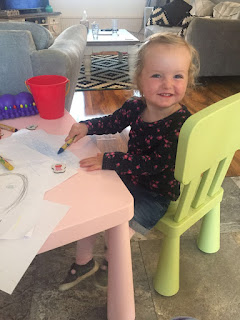 Fully recharged and inspired by Daisy, I’m off to write.

JO said…
Oh the joy of children discovering language - and their pronunciations that can confuse and delight us! (My daughter insisted that 'elephants' were 'effluence' ... much to the confusion of a zoo-keeper!)
4 September 2016 at 08:45

Bill Kirton said…
Lovely. And the 'mistakes' they make endure. We still use a phrase that occurred when one of my granddaughters was playing a game of shopkeepers with us. She 'delivered' some groceries to my chair, I asked her how much they cost and her answer was 'No quids'.
4 September 2016 at 10:49

Enid Richemont said…
One of my favourites was my grand-daughter's question re- seagulls: "Why aren't there any sea-boys?" And my son's "Laborate engines" applied to any interesting bit of mechanical junk he'd found to add to his collection.
Loved reading about Daisy's game, and her 'beens' are impressive!
4 September 2016 at 15:56

Rosalie Warren said…
Thank you Jo, Bill and Enid for the wonderful examples of children's speech. I love them all! I often say, 'Up get,' when it's time to get up... something Daisy's dad used to say in his distant youth! :-)
5 September 2016 at 10:53

Umberto Tosi said…
Your post made me nostalgic for when my grandchildren were tots and each moment with them brought delight and surprises. Thanks for reminding us that the learning process tells us far more about ourselves than what we already know.
5 September 2016 at 22:30