A celebration of a writers' group by Sandra Horn


This would have been my November blog had I not had an attack of brainfog. Apologies.
Here it is recast for December:

We’ve just had our last Writers’ meeting for 2019. It was festive, with exchanges of small gifts and cards and a splendid apple cake baked by Lisa. However, the focus was, as it always is, on The Work. This was known in our deeply-missed *Vera Forster’s day as 'Vurk'. She was Hungarian and 50+ years here had not changed her self-taught English very much. She allowed us a few minutes to chat at the start, and then clapped her hands and cried ‘Vurk! Vurk!’ So we did.

In my last blog I reflected on our long and happy times together as writers. This was stimulated by coming across Henrietta Branford's signed copy of her book Royal Blunder, dated May 1990. The group had been going a couple of years by then. At this our latest meeting, Lisa brought the prologue to her second book set in the time of Raffles in Singapore – the second of a planned trilogy. We have enjoyed the unfolding of the first intriguing story hugely, so this was very welcome indeed.

Debbie, who is most of the way through the second draft of her first novel, brought a new chapter which acted as a kingpin to the elements of the story, which is set in and around Beaulieu Abbey and has a ghostly protagonist. Haunting in the best sense of the word.

Valerie brought what might well be described as the finale to her 6th novel** – she had started it when we first met but then couldn’t get it to work as she wanted, so put it aside until recently. Now, with the other books completed and much admired, she has been able to go back to it. It’s another terrific read! 2020 should see the publication of it, alongside those of Debbie and Lisa, or there is no sense left in this world at all. Thank goodness we have the DIY option now and are not at the mercy of ‘sales and marketing’, if it comes to it. 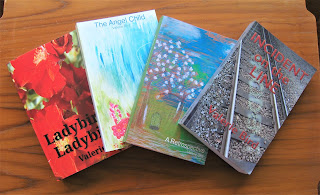 Penny, our newest member, has brought marvellous poetry and short stories before and we are looking forward to much more in the new year. Jayne is having a sabbatical from the group while she concentrates on developing her playwriting, which has already seen sell-out performances in London and Salisbury. She has been accepted onto a prestigious course based at the Criterion Theatre.
I look along the shelves at my own finished work – thirteen picture books, four story books, poems in anthologies and literary magazines, short plays and monologues, and I know there would have been none of it without the support, encouragement, and most of all, critical appraisal, of this amazing bunch of women writers.

Here it is, the end of the year. Winter. The sun is shining but here’s a wintery poem to sign off with. Here’s to a wonderfully writerly 2020!

How to paint a snowscene


Cover your ears against music,


chatter, noises of the town.


Empty your mind of sunsets,


until your blanched skin stings.


Mix china clay dust from the docks at Par


with melt-water from Hofsjökull


Pick up your brush:


Dip into the white clay slip,

* Vera Forster: A Daughter of her Century 2009
'A clever child chooses well the time and place to be born. Marton Street in Budapest 1924 was not the best choice.' So begins the story of Vera Forster's extraordinary life.
**Valerie Bird: A Retrospective, 2013
‘I wasn’t the first person to put a pillow over a woman’s face, even with love…’ ‘I don’t want to live anymore, let me go!’
The Angel Child, 2014
Set in the magically real worlds of a market garden, a fairground and an unnamed land in South America, passionate love, prejudice and cruelty claim their victims
Ladybird, Ladybird 2015
She’d known what I did when I said I was an entomologist. She said, ‘No wonder you came to find me.’
Incident on the Line 2017
Greata Salway, a successful writer, meets Gerald, an ex-lover and the father of her child, at a crime writers’ convention thirty years after their liaison. He was never told of Lottie’s existence and vice versa, a secret which haunts Greta, especially after Lottie’s death.
The Eye of God (a novella) (ebook) 2013
Fate is an artful dodger. Whatever you believe of gods and destiny and all that crap, fate steps out to slip signals, pull points, shift tracks, to take you on a route so bizarre, it makes you stare at the stars and scuff your feet.
books Jayne Woodhouse Valerie Bird Vera Forster writers

clarabenet90@gmail.com said…
Beta-readers are indeed extremely important in your process. They will catch mistakes even you or a proofreader didn’t catch, and give amazing tips on how to develop further your story. I used https://honestbookreview.com to get a few reviews and also promote my book. Hopping to be in the top 100 genre lists and see better sales this Christmas season…
20 December 2019 at 10:22