By Cecilia Peartree - December 05, 2019
I was making a list of presents to give people for the occasion which I suppose we can now mention (Christmas) when I had the idea for the title of this post. It was only after I had thought of it that I remembered two alternative meanings which seem curiously relevant. I've checked online and found there are far more than two meanings, and they all appear to have originated differently. Just thought I would throw in something related to writing here!

To begin with the Christmas present list, I am very uninspired this year, a feeling that is not entirely unprecedented as I have had spells over the years of either hating the whole season or just barely tolerating it. I don't think it really gets much better than that, although I've worked out as I got older that actually it's the darkness of this time of year I hate, and that my mood will always improve marginally once we get past the winter solstice. Which of course is why Christmas and New Year happen at this time in the first place. Of course there are lots of external factors making me even less enthusiastic this time, such as the impending election (December 12th) about which I'd better not begin to comment. I''m not sure if that's what has caused me to write 'socks' opposite the names of several family members, but it must be a contributing factor. On the other hand, one of my sons told me once that he loves getting new socks for Christmas. Probably not as much as he loves new computer game technology, but it seems to be quite a close thing. My grandson is the only one I've actually bought anything for to date, because I can never resist toys and books for children. 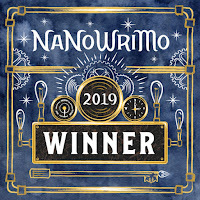 I think part of the problem for me is that, in spite of the list-making, I feel rather listless.. Of course I have just completed 50,000 words of a novel in November for NaNoWriMo, which might help to explain it, particularly since this past month has been particularly challenging. It didn't help that on the 1st of the month I was surprised at my writing desk by the appearance in the doorway of a doctor from our local practice, accompanied by a student. This kind of thing would happen quite frequently when my husband was first released from hospital in May or thereabouts, because there were carers and physiotherapists and district nurses and they could all let themselves into the house using the key from the key-safe at the front door. It hadn't happened for a while, hence my surprise, which was magnified when the doctor announced that my husband was ill again and should really go back to hospital. This turned out to be easier said than done, because about half an hour later, having been upstairs to have a look at my husband, the doctor returned and announced that he had refused to go to hospital. This didn't surprise me as the last time he was summoned there for a scan they kept him in for a week, during which every time I went to visit him, he tried to persuade me to take him home in the car

The doctor's visit was the signal for all sorts of other tasks for me to do, such as visiting the local practice and rushing to the pharmacist for more antibiotics, and then one evening when I was waiting for our Just Eat delivery two people from something called the Hospital at Home service appeared on the doorstep, which was very disappointing as I had been looking forward to fish and chips. Anyway, things were all right in the end and I feel that my husband's stubbornness was vindicated. 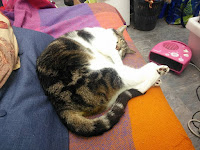 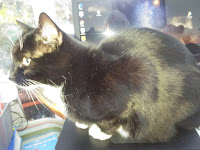 As November went on, other random events took place that I selfishly resented for disrupting my NaNoWriMo activity. The whole family (apart from my husband who was full of antibiotics by that time) became ill in one way or another, and my car had to have some welding done to make it fit to pass its MOT test, a process which is still going on. Fortunately I hadn't been able to drive for 4 weeks recently following my cataract surgery, so I already had the number for the best taxi company saved in my phone and was accustomed to calling them day or night from almost any location. I even had to take Jacques the cat to and from the vet by taxi when he mysteriously developed a limp in a front paw, perhaps in sympathy with others in the family. Incidentally the 'new' cats are now allowed downstairs, which means there are 3 of them poised to jump on my keyboard as I type instead of just one. The small black and white cat who used to hide behind an old fridge in my son's game-playing room, has now taken to sleeping behind books in the bookshelves in the front room, and the grey female one has not given up on her pointless feud with Jacques, the original cat, but now wages it from the chair next to the radiator in the kitchen.

The only nice thing that happened during the month, apart from the fact that I managed to pound out 50,000 words of a historical novel sequel in just over 3 weeks, was that the optician told me my eyes were now good enough for driving even without the new lens I've just had put in my spectacles. I indulged in the pleasure of driving to work for approximately a week before the welding saga began.

To get back to the title of the post, I have an image in my mind of a ship listing as it prepares to sink beneath the waves. Although hoping not to sink, I do sometimes list to one side as I walk, although I've taken to using two sticks when I go out, especially if I have to use public transport or walk along any pavements.
christmas illness Lists NaNoWRiMo

misha said…
What a month! Hope December works out better for you.