A Little Slice of Literary History by Wendy H. Jones

As well as being an author, I also have the honour of being the President of the Scottish Association of Writers. Amongst many other duties that the role entails, I sometimes travel to visit writing groups in all areas of Scotland. This week I am in Thurso and Wick visiting both Caithness Writers and The Write Place 2b, which I have to say has been exciting. Both groups made me extremely welcome. It's encouraging to see so many new and established writers, which brings me to my slice of literary history of the title. 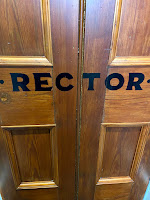 Scotland has a long literary history with some high profile writers and books. Reading has always been important with Andrew Carnegie building libraries and promoting reading and literature. As a reader I love to visit libraries when I visit new places, so visiting both Wick and Thurso Libraries was high on the agenda. Thurso has moved from the old Carnegie library, which is now an art gallery, and into a former school called the Miller Institution. It was originally built in 1862 as a fee paying boys school, with the foundation stone being laid in 1860. It closed in 1958 but then reopened as Thurso Library in 1968. Inside, it is smart, cutting edge and contemporary, with one fabulous exception. The original Rector, or headmasters, study, has been preserved to house the historic collections. This area is a bibliophile's dream. I felt like I'd died and gone to heaven. Row upon row of books which generations of library readers had enjoyed. My thoughts turned to those who had read the books before me. Were there any famous people amongst them? These historic texts are in cabinets but these are not locked. You can pull out, handle and read these books at will. 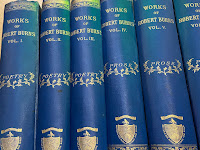 Of course, whilst I pulled out and opened several texts, my Scottish heart wanted to look at our two most famous writers. No Scot can talk about the history of Scottish writers without mentioning both Robert Burns and Sir Walter Scott. The librarians at Thurso Library, who are truly awesome, helped me find the correct books and brought them out for me, The picture at the top of the blog is of his Waverley Novels. Did you know that Waverley Station in Edinburgh is named after these books. It's the only station in Britain. to be named after a series of novels. They also had his complete poems and, of course, everything by Robert Burns. I enter a magical place as I opened these. MY emotions swelled, knowing that as the President of the Scottish Association of Writers, I am playing a small part in supporting present and future writers. I feel like I am a small piece of Scottish literary history.

My foray into the literary past has shown me, once again, the importance of our libraries and how vital it is that we keep them open. Libraries do so much more than loan books and I am proud to be living in a nation which values libraries and reading. I hope this continues and that libraries continue to be available to support future generations of readers.


Wendy H. Jones is the award winning author of the best selling DI Shona McKenzie Mysteries, Cass Claymore Investigates, The Fergus and Flora Mysteries and the Bertie the Buffalo Picture Book. She is also the President of the Scottish Association of Writers and the Webmaster for the Association of Christian Writers, as well as a popular International Public Speaker. You can find out more about her, as well as book her to speak on motivation, writing and marketing, via her website

Susan Price said…
Scott and Burns, yes -- but Robert Louis Stevenson? He taught me so much about writing and I think he's very underrated.

I don't know as much about Scottish libraries as you, Wendy, but I remember visiting Inverness library when my partner was researching his ancestors (who were from the Black Isle) and we were both tremendously impressed by the staff's knowledge and helpfulness.
17 January 2020 at 12:15

Umberto Tosi said…
Thank you for your insights into the works of Burns and Scott, as well as singing the praise of fine libraries. You are so right in stating that they do so much more than lend books. And we are called to protect them especially in this age of ignorant armies who despise them for preserving the knowledge that threatens simplistic authoritarian regimes on the rise these days. Scott and Burns would recognize them.
17 January 2020 at 19:12