An Amateur looks at the art of Poetry

“So, homework,”– the dreaded words. We are nine-year-olds (or maybe 10 year olds, not more), it's getting towards the end of today’s English lesson, and we’ve been told about the poet Wordsworth, thought about the Lake District in springtime, and read Daffodils…). “So for homework, I'd like you all to write a poem about autumn,” she smiles… “the season that we are in now.” She sends another smile around our class. “Let's just think about autumn – what do you like about Autumn…?" Gosh, what do I think?

And so it goes. Went. I remember spending the whole weekend under the dark cloud of writing a poem about Autumn. Resenting Wordsworth, with his writing-appropriate name. A poem! It had to rhyme. It needed rhythm, and about four or five verses. It had to catch the inner eye, or as we’d had this explained, to capture a photo of autumn in your imagination.

Fast forward, as they say, about seven years. As teenagers the urge to write poems can suddenly strike. Suddenly they seem a great way to sort new and chaotic emotions. We write, inspired possibly as much by our favourite song of the time as by Milton’s Paradise Lost or John Donne’s sonnet beginning, Busy old fool, unruly Sun (which we had been studying). We write our own clutch of protest poems, or a bunch of hormonal musings.

So, you get the drift? I am much more of a prose writer than a self identifying poet – even though I have written, on and off, quite a few poems. Mostly over times of stress, goaded on by the impulse to define and sort emotions, most of them common to all of us. But am I qualified to speak as one of a panel on the importance of poetry?

Poetry today has come a long way, far from its  beginnings in the ancient epics. J. R. R. Tolkien adopts some of the cadences and metres of Medieval poetry in his masterful fantasy novel Lord of the Rings, both in passages of prose and as original poems. But on its  way to us, poetry has passed through the Metaphysical poets – John Donne, Andrew Marvell, George Herbert – and the Romantic Movement – Keats, Coleridge and Wordsworth – which I studied at school. Gone are sonnets and sestinas – or are they?

Poetry conventionally differs from other writing in its commitment to rhyme, rhythm, and formal style. Not only that but it is closely allied to music, and so to the ears. Whether the “inner ear” or the outer, collective ear of performance. Poetry appeals especially to creative writers who particularly enjoy pattern-making, fitting the deep emotional content of what they have to say into strict boundaries, and choosing a suitable form. A serious mathematician friend writes sestinas, I recall one piece which featuring (I think it was) bananas, had us in stitches as he read it aloud. Another writer friend prefers and perfects the sonnet form. Haiku, short, pithy pieces, offer a challenge to pack your thoughts into a very small space, and this challenging form has developed into one with popular appeal.

Back to performance, where poetry certainly and historically belongs. Despite many small volumes and chapbooks carefully printed and produced by contemporary poets, poetry has also re-visited its roots, beginning (as far as I know, others may disagree) via the Beat Poets of the 1940s, 1950s and 1960s. In America Allen Ginsberg, and in England Adrian Henry and Roger McGough are names I recall. Possibly the North-Eastern poet, Basil Bunting, who I heard read at the Morden Tower in Newcastle as a student, also belongs here.

“Spoken word” works are basically oral art, written be read or performed. The focus is on the aesthetics of wordplay, intonation and voice inflection. I remember once, aged about 15 or 16, performing a protest poem to the accompaniment of a friend playing the clarinet. It was definitely spoken word, and there was much emotion, wordplay, intonation and rebellion in that poem. And now we have Rap – much closer to poetry and employing rhythm, rhyme, and musicality. While moving far from the conventions of “Romantic” poetry of Wordsworth, Keats and school textbooks, Rap engages with our present world in a way which we, certainly, don’t see Wordsworth doing. Though maybe William Blake does?  His poem, known popularly as ‘Jerusalem’ is, in fact, a serious protest piece against the ‘dark satanic mills’ of his time, sadly now used as a rousing patriotic song. Blake would, I think, be furious.

And so to my question – is poetry the right place for competition? Should poetry, the home of deeply felt emotions, not only love and longing but grief, loss, and protest, be subjected to the audience for its judgement in a Poetry Slam? Does the very word “slam”, used to describe a public competition where poets read their work before an audience and panel of judges, fit poetry, an art form describing both beauty and a raft of deep emotions? Can this word “Slam”– the violent bashing closed of a door – suit or belong to poetry?

I leave it to you, fellow writers: the passion of the poet is partly what the audience will judge their performance by. The audience is sometimes the sole judge (rather than using a panel of judges).  It can also be said of a slam that all the poets are equally open to criticism and nobody has celebrity status, which is possibly a very good thing. Poetry is egalitarian, after all…

I can’t imagine TS Eliot, John Betjeman or W. H. Auden competing at a slam… any more than I can imagine any of them enjoying a competitive sports! ‘In the room the women come and, Talking of Michaelangelo’ or ‘Come friendly bombs and fall on Slough…’  But all poets are not made in the image of Bunthorne  in Gilbert and Sullivan’s Iolanthe… How about Dylan Thomas’s ‘Rage, rage, against the dying of the light’  though? Plenty of slammed doors in those thoughts. Poetry is a wide field, or has been recently said of the Labour Party, a broad church.

What is your feeling about poetry slams? Have you performed at one? And would we 9 year olds have preferred this approach to the reverence we were encouraged to develop towards poetry and poets? 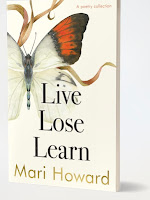 My short book of poems, Live,Lose,Learn … poems  from life is available from my website,
https://hodgepublishing.co.uk/books/

?? Where do beta-readers fit here? I think this comment is wrongly placed...?

Great post, Mari! Thank you! clarabenet is clearly an interloper trying to sell us something - paid reviews. I'll ask the administrators to block her.

I too have a mathematical background, and a liking for formal poetry. Funnily enough, I have also written a piece about bananas, though mine is in a form called the canzone, which is like a sestina, only more so - 65 lines. Which is at least 30 too long, in my opinion.
I have often participated in open mike sessions - nothing that called itself a slam, but several where there was a winner by a vote of the audience. Generally the poems that won were among the best. Acting ability can help, but is rarely if ever enough to make a bad poem rise to the top. Humorous poems have a better chance here than in a conventional written competition, but I don't think that's a bad thing. I don't know of a funny poem ever winning a major poetry prize, and I think that's a shame. I don't know about T S Eliot, but Betjeman was a pretty good performer - he even made some records, with musical accompaniment. I have several books of Philip Gross's poems, but I much prefer them when read by the poet himself. I think a lot of the best published poets would win a great many slams, if they could be bothered.

I know some excellent slam poets who write beautiful, meaningful poetry. It's 2 crafts in one really --- the ability to write poetry and to perform it with passion in front of an audience. To marry the two seems almost counterintuitive, and yet the great ones make it look easy.

For me, anything that shines a light on good poetry cannot be bad. Slam poets are introducing poetry to a new generation who may not otherwise have been interested in the art form. For too long, I think people thought that poetry was only for the elite. I think slam poetry brings the form to the masses.

Eden, I so agree re new audience and moving away from 'elitist art'! Personally I would not enjoy a slam, but I might've when I was younger with more energy. In order to be provocative though, I put the point that 'slam' maybe didn't 'suit poetry' to see what others felt... The one of my poems which caused most audience appreciation was one about the Menopause.. and it was humorous...

what a great post! I just see the change of name as a marketing thing, in the same way that studying beetles sounds boring, but studying mini beasts sounds a whole lot more exciting. I had never thought of the song Jerusalem as a protest song but had always liked it. Now I shall look at it with a new vigour. Thanks Mairi. Lynne