I am a fan of The Archers… the Archers potters along, but I find myself these days hoping that something might have a successful outcome — why must the Archers mirror society, and more relevantly, does it?  The Rob and Helen storyline was exciting, moving, and telling, a warning about coercive control… now the Emma and Ed one informs about the desperate plight of a rural population struggling to make a home and living… but, if that crash lands in total failure, doesn’t it, somehow, also teach that there can be no escape, none at all, and leave listeners depressed and hopeless?

I don’t know. I don’t believe in offering my readers total ‘happy endings’ in terms of ‘getting what we want’, but I hunt for a bit of balance. I watch Call the Midwife for relaxation, fully realising that any happiness achieved is not, of course, always an outcome in real life, but at least I am relaxed and entertained. I have friends who can’t
watch: remembering labour and birth they don’t
want to revisit it on screen...

The kids in CTM’s East End might well really have no shoes, rats in their homes, and desperate mothers did die of back street abortions. And it was the 1950s. And, I was then a middle class small child who as yet didn’t know, except about the shoes.

So, with domestic violence, child poverty, and failing relationships, can we and should we accept ‘happy’ endings now in our secular 21st-century world? What is a ‘happy ending’? Fairy stories often end with the rather empty, cliched stock phrase ‘and they lived happily ever after’.

Is compromise a ‘happy ending’?  Why might we now prefer an ending which is open or even tragic? Why are these endings considered ‘more realistic’ and why do we desire ‘Realism’? Was Fleabag’s ending what we want: open, but unresolved?

More specifically, is the realism in soaps and TV dramas truly real? Are the characters real? Is it consistent? The ‘realism’ may inhabit the dialogue, but breaks down when characters supposed to be professionals (as in the drama Dr Foster, particularly inept and depressingly focussed on negativism, sex and rows) or running a successful business, behave like street kids at home with their partners. Do so many of us do this that is realism?  It cuts talk, yes, but what else? Violence isn’t ‘acceptable’ but it’s what we do? Meanwhile total lack of realism reigns in the boring bits such as when medicine or business is being practised. Of course we’d not expect long boring ‘being at work’ scenes, but we do need, if insisting on accuracy and realism, to be shown whether this character or that are competent people or already living a chaotic life of emotional stress, mistakes, snapping at colleagues, on the edge… will it result in mental breakdown and inability to function in a professional capacity? Realism? Rather, these stories require suspension of disbelief! What do they say about relationships but selfishness, misery, and middle class domestic violence? Is that  our only ‘realism’ today?

Is there maybe a ‘message’ contained in these dramas: if so, why? Are they the descendants of ‘kitchen sink’ plays written by ‘angry young men’ of the 1950s –  Kingsley Amis, Arnold Wesker, Stan Barstow… John Osborne’s Look back in Anger being the iconic example. As Hobbs said, human life is “nasty, brutish and short”. And is unlikely to be anything else?

Perhaps writers feed the public what it wants? Or are we writing out of our frustrations and regrets, sadnesses, disappointments and rage?  The recent memoir phase has covered topics from the life of minorities, whether of ethnicity, sexual orientation, class, or other groups who find themselves in what feels an unfairly negative position in a culture which suggests that everyone can and should ‘have it all’. Helpful or unhelpful to read, these memoirs aren’t written to entertain, or ‘lose yourself in a book’ but to expose life’s unfairness, to highlight disappointments, tragedies or frustrations. Occasionally there’s a ‘happy ending’, as with Elizabeth Gilbert’s Eat Pray Love or  Alice Jolly’s Dead Babies and Seaside Towns, where the protagonist obtains their goal, and thus solves the problem. Girl with Dove by Sally Bayley leaves us knowing that 'up by my bootstraps' may sometimes reap dividends... 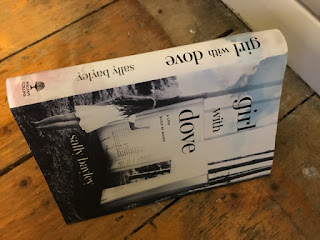 And so memoir may deliver the hope, while fiction highlights the grim reality…?

To embed reality into drama or fiction needs care and insight. Diana Evans puts the problems of the black middle-class into novel form, (Ordinary People): it is just that — ordinary… (Evans is great at writing about boredom so that you feel it!)  Tayari Jones does far better in An American Marriage, going deeper into character, developing (and demonstrating through interaction and dialogue) motivations and ambiguities, which demonstrate an empathy with her creations, and creates a page turning story rather than flat complaint. The young black American author Angie Thomas does superbly with her page-turning THUG (The Hate You Give), chronicling the struggles of escape from the inevitable place class and skin colour has assigned her and her fellow African Americans.

If novels can entertain, inform, and open our minds to the lives of others while supplying at the same time as satisfying read, is this impossible for drama, especially soaps and TV drama?  Conclusions with ambivalent, open endings, even happy ones, usually involve growth and change. Soaps and TV dramas are the sources of quick-fire entertainment. Characterisation can slip in order to pace or literally ‘sex up’ a story in this preferred relaxation for many people. Novels may speak more constructively, memoirs less so. But memoirs, possibly, are informing the lack of if not happy then satisfying endings in the threads of soaps and the themes of dramas. People are made aware of the sufferings of others, maybe even find pleasure in the satisfaction or schadenfreude which appeals, and maybe also reassures them, that the lives of others are not necessarily better than their own: the grass is not greener, and happily ever after can be dismissed as a myth.

Of course, I would still like Ed and Emma Grundy to reconcile, but I suspect a Thomas Hardy influence at work on the ending…

Jan Needle said…
Interesting read, thanks. As to reality and The Archers, I never recovered from discovering that the actor who plays 'Emmer' is a highly educated young graduate who speaks impeccable 'RP' and is as far from looking like a Borsetshire bumpkin as it's possible to imagine! Truth? Fiction? Stranger than? Compute from any combination...
And as for the new series of Killing Eve - well. Was kann man sagen?
22 April 2020 at 10:28

Clare Weiner (Mari Howard) said…
It's the writing, the story, the dialogue which I'm talking about here - an actor may come from anywhere and learn to speak in many accents - as Shakespeare put it, "One man in his time plays many parts' - though I take your point if the problem is whether casting a working class girl who's an actor would give someone less privileged a job.
22 April 2020 at 11:55