This weekend I should have been attending Horror Writers Association’s annual Stokercon event. Stokercon usually takes place in the USA as the vehicle for presenting the Bram Stoker Awards but this year it was to be held in sunny Scarborough. Okay the event was not cancelled, merely postponed until August, but who knows what will happen by then.

That being the case Peter and I decided to go ahead with an online launch this weekend and retain our slot at the revised August date as a showcase.
Its no big deal given the enormity of what is happening around the world but after all of the work we put into these things I imagine most people are disapointed with missing something in the past few weeks. A holiday or a birthday or just some event where they meet people in general.

I am not bothered by the logistics of lockdown in general.  I quite like my own company and only ever run out of time rather than things to do. There are books to write and books to read and an allotment to cultivate.

But missing the Stokercon weekend puts a different light on things. Choosing to be alone and being unable to connect are not the same thing. I will miss the catching up with old friends that I only meet at these events; the making of new friends as one inevitably does; the final putting of faces to names of people we have chatted with on social media and the general hum of people meeting people. As with any literary event it’s the personal contact between writers and readers that makes the difference. You can Zoom and Skype all you like but staring at a screen with all of the disjointed strands of conversation that come from it is nothing like standing in a crowded room, glass of wine in hand, and talking the night away.

With rumours that social distancing to be kept in place until vaccines are developed, which could well be years rather than months, one wonders if such events will ever be the same. Meanwhile we make do with online where social distancing gives way to social networking. Passing on the word from one mouth to another, one group to another, one country to another. I am really hoping that Stokercon will happen in August and in the meantime I shall wave to friends over the miles through the joys of technology.

But I can’t leave without telling you what we were launching. Wearing both editorial and authorial hats with the Alchemy Press we had four titles to be launched.  The Alchemy Press Book of Horrors #2 an anthology  of horror fiction with an emphasis on weird and strange rather than the graphic. We also had Talking to Strangers and Other Warnings collection by Tina Rath. Tina’s fiction has appeared in just about everything for Woman's Realm to Pan Books of Horror. We also has two folk horror novellas:  Les Vacances  by Phil Sloman and A Small Thing for Yolanda  by Jan Edwards.

That’s it from me for April 2020. Keep well and keep safe and trust we shall again in May. 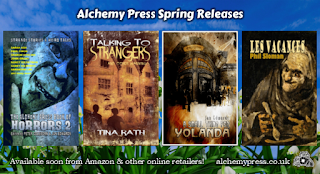 Griselda Heppel said…
It isn't a big deal, in the bigger scheme of things, as you say - but it's still a loss. An event so many people have prepared for and looked forward to, and especially when combined with the launch of your books. I think you're right to launch them anyway - who knows where we'll all be by August? - and word can spread online and lots of bookshops are supplying books direct to customers (when they can get hold of copies, that is... I hear Gardiners aren't distributing, which must make things v difficult). What happens to the Bram Stoker awards themselves - will they be awarded online, or not made at all? Literary festivals, music festivals, theatre and sport cancelled all over the world - no one could ever have imagined a year like this!
Lots of luck with your books, I do hope they do well. They look nicely shivery!
20 April 2020 at 11:56

Unknown said…
So far as I know the awards will be delayed until August. But guessing there. I missed not meeting up with old friends. The books are all suitably shivery ❤️😊
20 April 2020 at 19:40