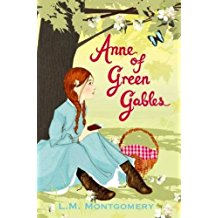 Some people comfort eat. When times get difficult, I comfort read. For me that often means revisiting books I’ve read before, especially when I was young. So recently I downloaded “Anne of Green Gables” onto my Kindle.

The last time I’d read the Anne books was when I was in my early teens. I’d loved them then and Anne Shirley and Avonlea had stayed in my imagination ever since. The image of the orphan girl waiting at the station to be picked up by Matthew Cuthbert, only to be told that they had requested a boy and she was to be sent to back to the orphanage was haunting, as was the night and day she had to wait before Marilla and Matthew changed their minds and let her stay at Green Gables, the house she had fallen in love with at first sight.

From then on I had followed Anne’s story avidly. Journeying with her from childhood to adult and loving every minute.

Re-reading the books, I had an initial moment of doubt. At first Anne’s gushing, optimism and over romantic view of the beauties of Nature was a little wearing, until it was punctured by the author’s sly humour.

When Anne and her friends go on a romantic picnic, the other girls drink lemonade, but Anne insisting on the beauty of her surroundings and the crystal stream that flows through them insists on drinking from the brook, which LM Montgomery hastens to tell us tasted of mud.

There is humour too in the scrapes Anne gets into, like dying her hated red hair green, or getting her best friend drunk on homemade wine, which she has mistaken for cordial.

Time and time again Anne is brought down to earth, but never in any destructive way. The dour Marilla and acerbic Mrs Lynde soften towards her, she gathers a group of girl friends who will stay with her for life and of course there is her relationship with Gilbert Blythe.

The language may be a little old fashioned in places, but the exploration of developing relationships and the emotional lives of the characters ring true. Nor does the writer avoid the realities of life in the early part of the twentieth century. There are deaths, some easy, others harrowing.

What also appeals is that the books are full of strong women who are not dependent on men for their sense of identity. Anne and her friends go to college and graduate with BAs just as the men in their lives do. Some of them also work for their living, teaching school, and while marriage will put an end to this career, there are widows who own boarding houses, women of independent means who go travelling late in life as well as the wives and mothers.

I also love the sense of place and the vivid descriptions of the seasons, from the chill of winter to the beauty of spring when the landscape is awash with blossom, lushness of summer and the rich colours of autumn.

“A September day on Prince Edward Island Hills; a crisp wind blowing up over the sand dunes from the sea; a long red road winding through fields and woods, now looping itself about a corner of thick-set spruces, now threading a plantation of young maples with great feathery sheets of ferns beneath them, now dipping into a hollow where a brook flashed out of the woods and into them again, now basking in open sunshine between ribbons of goldenrod and smoke-blue asters.”

All in all, re-visiting Avonlea has been a delight.

Peter Leyland said…
That's a nice post for me Misha. My Mum who had read the books as a child passed them on to me when I was growing up and I loved finding out about what girls were like. She was a strong woman, widowed when I was 12, so maybe her growing up with Anne helped her to bring up three children alone in the 60s before there was much recognition of how difficult this could be. When I went to Prince Edward Island I visited L.M. Montgomery's house and bought her book, The Alpine Path, The Story of My Career.
11 March 2021 at 11:42

Griselda Heppel said…
I am ashamed to say this is one of the great children's classics I have never read, and I can't think why. I think my mother tried me on it when I was too young, and that was so off putting (a common parental mistake which I'm sure I've made with my children too) that I missed out on it altogether. Your lovely blog post has reminded me that I do mean to put this right and I will.

I loved it when it was serialised on the BBC decades ago. As you say, full of so many strong, upbeat female characters who shape their own lives the way they want. Truly inspiring.
12 March 2021 at 19:31

Kirsten Bett said…
Thanks for your blog! I have never read Green Gable but will give it a go as I am very much into comfort reading at the moment. I have just finished All the lonely people by Mike Gayle and loved it!
14 March 2021 at 07:53