One Year On: N M Browne 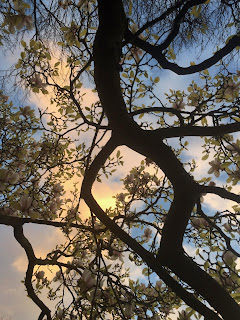 It is a year since I had Covid and this time last year I wrote this:

'I suppose I should write something funny about working in isolation. To be honest I have been ill for most of it so far – not desperately-not-breathing ill, more fall- asleep-in-the-afternoon- blancmange- brain kind of ill, which has been almost restful.'

A couple of days later I was able to go out and wrote this:

After a fortnight of quarantine

I wake to a different world

the air is clean and no planes plough their

white furrow across the blue sky.

I buy a coffee ( takeaway) and it tastes like

my first, a sweet butter- fest of croissant

is the best I ever had.

I say hello to everyone I meet,

as though I’ve moved from sick bed to dotage

but this is not the London that I know.

I wave at a toddler on Richmond Green

Everything is growing wildly, even death,

little else to do: a miracle, a stealthy

constancy of change in days otherwise the same.

Plum tree blossom’s been and gone, the magnolia’s

done, there are purple flowers on the rosemary -

so Ophelia! bloom of red camellia

reminds me of consumption, the age of plague, we

don’t talk about the rising numbers in the morgues

but focus on our flat, green patch of grass, the broad

beans we have planted, and the singing of the birds.

Indolence and entropy: such strange days.

I include these poems not because they are good – they are terrible  - but because they remind me vividly of this time last year.  So much has changed: the huge number of deaths, Trump was replaced by Biden, we properly left the EU, Starmer replaced Corbyn,  the Black lives Matter campaign gained traction, and so much else. Yet, in my personal bubble, last year seems to be a haze.  I had mild covid symptoms for about six months and I think I lived the year ever so slightly out of focus.

I wasn’t idle. I’ve been creative. I wrote a lot of poetry, some of it was published. I revised the book that has just come out. I drank wine in the garden, zoomed and Teamed, walked endlessly through Richmond Park. But so much of it felt like it happened to someone else: a long fever dream. Other days I forget that we’ve ever lived any other way. I recoil when people hug in films, share food, drink from the same glass.

Today the blossom is extravagant again, the sky, blue. I am reminded of  that first walk with my daughter after covid. So much is the same and yet everything is  so different.

Peter Leyland said…
Glad you managed to get it through the blogger system, Nicky. Love that second poem, particularly the final couplet, 'such strange days' indeed.
29 March 2021 at 19:28

Sandra Horn said…
I like your 'terrible' poems very much indeed, especially the second one. Moving and powerful. Thank you.
29 March 2021 at 22:22

Kirsten Bett said…
Hi Nicky, it is so good that you captured those lines because even the strange becomes normal after a while. I love your poems because of how you captured it. Thank you!
30 March 2021 at 08:06

Cecilia Peartree said…
I too like the way you've captured the times we've lived in so succinctly and well.
30 March 2021 at 08:49

Katherine Roberts said…
That coffee and croissant poem spoke to me! And I know exactly what you mean about the fever dream... though sometimes I am afraid to wake up.
1 April 2021 at 18:36