I don't know when to stop by Sandra Horn

I’ve just had a hissy fit on Facebook because – and it’s entirely my fault – I sent a poem off with my usual lack of hope, was amazed to find it (a) shortlisted, (b) up on a website and (c) to be published in a chapbook. The thing is, AFTER sending it off, I could see several things wrong with it. I never learn. However, the information had mentioned editing so I was hopeful that at least I could change the terrible last line. Nope. The Editor was happy with it as it was, except for one comma. Oh, and I’d also agreed to read it in an online showcase…Cringe!

My hissing and ranting – ‘I can’t read it!’ etc. resulted in several kind people encouraging me to read my updated version instead, and other people saying things like ‘but they like it, they must know what they’re talking about,’ and finally, ‘why don’t you trust them?’ Ah. That’s the thing. I’ve had bad and good encounters with editors over the years. Sometimes they have improved my work and sometimes they have made suggestions that wouldn’t work, or even re-written bits. That’s a no. Tell me to cut it, tell me to simplify, expand, whatever, but please keep your mitts off. Is that arrogant? If so, I am. It’s always worked best if I know the Editor. If we’ve met and discussed changes. What is upsetting is something crossed out or changed  on a manuscript, or ‘We’ve decided to leave out X.’ with no discussion. It’s rude at best.  (Not that this poetry Editor was rude, of course – nothing but courteous and encouraging.)

In meetings with my writing group, everything is up for debate and it’s up to each writer whether they make changes after due consideration of someone’s view. It works. We know and trust each other. If it’s poetry we are discussing, I know that some people in the group don’t ‘get’ poetry but will have a view. That’s fine. No hissing needed.

Of course, none of this addresses the fact that I need some impulse control or I wouldn’t send something off in a rush and then have cause to regret it later! Also, I know I can’t stop fiddling with work. Years after something has been published I’ll be going over it, muttering and tweaking. It was a sort-of joke that every sentence in the picture books was re-written about 15 times for rhythm and tone:

‘Old Tattybogle stood in the middle of the field.’ – my original

‘Old Tattybogle the scarecrow* stood in the middle of the field.’  - editor’s addition, taken out at my request because it messed up the rhythm. Does it matter? It does to me, but anybody else? I have no idea.

I’ve lost track of how many new last lines The Dandelion Wish had after I’d got the rights back and published it myself, and I’m still not entirely happy. 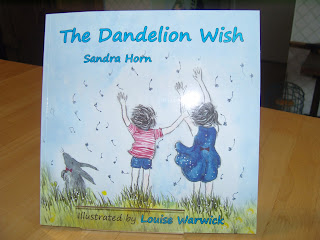 ‘So they danced through the seed-cloud and whispered their wishes.

A dandelion wish is a wish to come true.

And million-seed wishes always do!’ (original)

‘They danced through the seed-cloud and whispered their wishes,

But will they come true?

Now I look at them both and despair!

Perfectionism? OCD? Or just not knowing when to stop?

Jan Needle said…
Don't worry about it, Sandra. Old Shakespeare couldn't even decide how to spell his name, and he did alright, didn't he? ( Sorry for alright. I'm using voice activation, and it's a bit low…)
20 May 2021 at 09:22

Bill Kirton said…
You impetuous thing, Sandra! But you're absolutely right. And thank you for flying the flag for rhythm. It's a vital part of writing of any sort and doesn't get enough attention.
20 May 2021 at 14:22