I have written about planning here before, probably more than once. However it's a topic that isn't exactly dear to my heart, in fact in some ways it's the opposite. Oddly, there are some areas of my life where I enjoy the process of making plans just as much as the act of carrying them out. For instance, I love planning journeys, the more complicated the better. One of my best efforts was the plan for my trip from Edinburgh to Finland by train and ferry. The fact that in real life it fell apart halfway wasn't entirely my fault, although possibly I would have done better to use one of the routes suggested by the Man in Seat 61 instead of making one up myself. One of the minor irritations of the pandemic has been the fact that there's no point in planning long, complex journeys, because there is no prospect of being able to travel very far afield at present.

As far as writing is concerned, although I don't make exhaustive plans for individual novels* I do have a sort of system, for want of a better word, for planning my writing calendar. There's an annual plan, written in December or January for the coming year, and there are monthly plans, created at the start of every month. The annual plan is subject to change, which is putting it mildly. Actually when I looked back at the 2021 plan I realised I should really have waited until halfway through the year to create the plan for the second half.

*this is a massive understatement 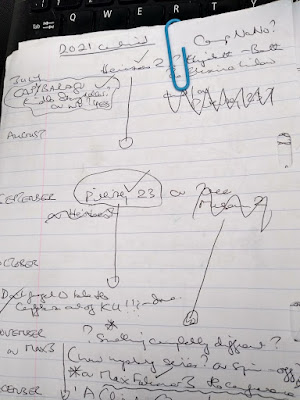 For National Novel Writing Month, which has just finished, until the 1st of November I had fondly imagined that this time I would be a rebel and not start a new novel but pick up my epic novel of the English Civil War, which I wrote about thirty years ago and for which I found the typescript on a shelf during one of my ill-fated de-cluttering operations, and rewrite it.

Unfortunately, or perhaps not, I discovered after reading a couple of pages that it was so boring I couldn't face even looking at it any more, never mind doing any work on it. Instead I cancelled my rebellion and started a new novel on the 1st of November. It's the third in an existing series and one that I didn't know anything about before I started writing except that it would take place at a museum conference that was running at the same time as the big climate change conference in Glasgow. At the end of November I had somehow reached 50,000 words. All I know now is that it's going to need a lot of editing before it's fit to be seen! Will this experience teach me a lesson? Probably not.

On a more positive note, I did manage to edit and publish the Christmas novel I had temporarily abandoned in order to take part in NaNoWriMo, and here's the evidence. 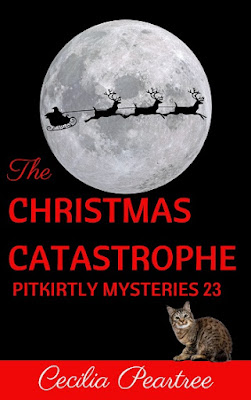 Peter Leyland said…
Really interesting to read about the novelist's world Cecilia. Now that I've finally retired I might just dust off that long buried novel about my school days - or perhaps not!
5 December 2021 at 14:25

Reb MacRath said…
I'm glad something productive came out of NaNeNuNayNo, which I just can't relate to all. I admire your ability to plan a year in advance.
6 December 2021 at 01:16

Bob Newman said…
Where can I read the book with the capybara narrator please?
6 December 2021 at 09:07