Getting it Right by Ann Evans 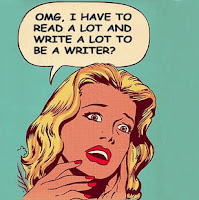 Recently I've been reading a lot of other people's work – stories by school children that I'd met on school visits who are hugely keen to be writers; another is a friend who's written a short novel about his travels; then there are 101 other pieces – yes 101 exactly, which are entries for a competition I'm judging – all requiring critiques.

I get a fee for the competition, but whether you're getting paid to provide help with writing skills or not, there's nothing better than seeing someone's writing coming on in leaps and bounds - particularly after following your advice.

I love doing workshops in schools and I'm often massively impressed by the standard of writing that can be achieved by youngsters as young as eight and nine with a little extra support and help. As for adults, I hope my courses have helped people, even if only to get them making time to write.

The satisfaction of giving others a helping hand on their writing path probably boils down to my early days of trying to write for publication and the multitude of errors I made along the way. It took years of learning by my mistakes before I could grasp what I was doing wrong. Take for example something as simple as getting the punctuation around dialogue correct. It's second nature now but such a common fault among newbies.

In my early days, I didn't know my punctuation was haywire, not until one kind (or frazzled) editor pointed this out to me in a rejection letter. I can still remember blushing with embarrassment as I realised I'd been making such a basic error for – well, ages!

When doing school talks, I often recount this little anecdote to the children, who are usually aghast to hear that a real live author was once as rubbish at punctuation as they are. My talks also recount my long struggle to get a first novel published, and how I wrote six different romance novels, labouring over each one, year after year; excitedly sending them off, systematically getting them back... the lesson here being the need for perseverance.

Sometimes one of the children will ask what I've done with these old manuscripts and I inform them that one has since been re-written and published, but as for the others, they are lost in a dusty old attic never to see the light of day again.

Until.... a couple of weeks ago, my ex husband brought round a box full of my old writings which he'd discovered in our old and dusty attic! Stuff I'd written as a real novice 30 odd years ago!

Among the yellowed pages of carbon-copied stories, was a ring binder containing one of those early romantic novels. I was so excited to read it after all this time. (And amazed I'd valued it so highly as to store it in a ring binder.) I'd totally forgotten what the story was about. However, I ended up groaning at all the clichés - not to mention the dodgy behaviour of the hero! And surprise surprise – those dratted punctuation mistakes around the dialogue.

At the time I'd really thought I'd got it right! But this was exactly what I pull people up for these days. If only someone had told me sooner. I truly thank God for that editor who took the trouble to point out the error of my ways.

Writing is certainly a craft that takes years to master – not that I've mastered it yet - you never stop learning. But it's a craft that can be learned. So what I've done is to write my guide to becoming a writer, bringing into play all the things I've learned over 30 plus years.

It's called Become a Writer – A Step by Step Guide. It's coming out as a POD and an Ebook this summer.  I made the deliberate choice not to approach a traditional publisher, because this is all mine - what I've learned over the years, and what I find works. My ethos being – read this and avoid years of learning the hard way!

I wonder what common mistakes other writers made in their early writing days.

It's weird reading stuff you wrote years ago, isn't it? I get enough of a shock re-reading the rubbish I did last year.

Very brave of you to reread old work! I don't know why, but I still cringe when I look at mine. Great idea to distil it into a book - and that's a great cover.

It's interesting - I have found awful stuff I wrote years ago. But then, I have found things that I reckon are infinitely better than the stuff I'm writing now, and that's perhaps because back then I was writing from the heart, without anyone telling me that I couldn't do this, that, or something else. I'll probably republish some of it in due course. I'll revise some of it in the light of experience. But I haven't, in all honesty, found that my writing career is a progression. Some of my earlier work is quite definitely better - more full of energy and originality - than later work. And that is perhaps why I'm so very suspicious of editors!

I confess to some errant punctuation (I've taken down an ebook that wasn't properly updated from these errors of 15 years ago) I must have been off school the year we did punctuation and speech marks. But I can FIX it now because I lived and learned. It was never an issue in screenwriting/play formats but with novels... had to learn. Then forgot I hadn't learned. Like everything though, there are two sides. Along with Catherine, I don't dismiss my earlier work, because I still believe in a lot of it. What I am doing though is converting a lot of stories told in one medium to another medium. I always wanted to write novels, but I needed to earn a living and screenwriting was the way not to starve. Not glamorous and NOT ultimately satisfying though. Was my early mistake trying to earn a living from writing in the first place? Now I've stopped trying to earn a living (from anything) life has become much easier and creativity much more pleasurable. Nothing used to bum me out more than TV production company accepting something (it was even worse than being rejected because I knew that what came next was my creative ideas being munched, mangled and generally kicked to death so that even if they did make the screen I'd not want to own up to them!) Not a way to earn a living.

Oh, how right you are!

Thank you all for your comments and the nice remark about my new book cover. I do agree that early work can seem more full of energy - as you say Catherine, probably because pleasing an editor was the last thing on our minds at the time. But you can certainly pick out the faults after a break from it, although 30 years is probably long enough!

If I started to list my mistakes, past and present, I'd never stop.

Here's something by a writer and critic I admire, M. John Harrison:

'First you need to make your technique unconscious, so you can do it without thinking about it. Then you choose to make it conscious again, and that gets you on the learning curve. Your goal is to make fiction seem as if no effort has gone into writing it; also that no effort is required by the reader.'

I'm not sure that I agree with him entirely about goal, but he does emphasise that fiction should only seem effortless, both to writer and reader. In fact, he doesn't much hold with adults reading only for escape.

I feel that many, many writers disappoint - even fail - because they reach the stage of unconscious technique and never move beyond it.