Reading, and writing, in different formats, by Enid Richemont

By Enid Richemont - May 28, 2012
I'm into a trio of print books at present, all borrowed from the Barbican Library. THE STORY OF MR SOMMER, a short, beautifully written/translated novel by Patrick Suskind, with exquisite illustrations by Sempe was both moving and haunting - just one of those books you can't forget. Jeanette Winterson's fantasy based on Noah and the flood makes an amusing contrast, and I have yet to savour the third - JUSTINE, by Alice Thompson... I've already dipped into its descriptions though - the sort of lavish and visual poetic prose I lap up.

There is a difficult-to-define difference between reading on my Kindle and reading a print book. All three print books are paperbacks, and so have rather springy pages which is annoying for breakfast reading - one hand on the coffee mug and the other on the book. There's also a subtle difference for me, as a writer, between reading/working on screen, and reading my eventual print-outs, and I do wonder if there is a similar one for people reading in different formats.

Very recently, I've re-published WOLFSONG, the Young Adult novel I published with Walker Books, and re-reading and editing on screen does feel different  - I wonder what my readers will think. The house, CHANTELOUP (in La Vendee), which for me was the star of the story, has recently been almost destroyed by a fire which seems like yet another part of its turbulent history. I was once very ill there with some obscure viral infection, and I remember lying in bed, under a fragile linen sheet, reading a couple of antique children's books (there was an extensive library, all behind glass doors) - and this was long before I ever became a children's writer. 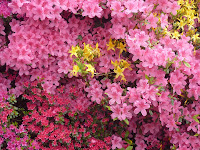 At the weekend, we went to Hampstead Heath to see the rhododendrons which a neighbour had told us were spectacular - and they certainly were. It was a perfect spring day, if chilly, and there were little clouds of strange insects to be avoided. We looked down at the city, as we've so often done from there, and I thought about David Gentleman's latest book - LONDON YOU'RE BEAUTIFUL - the result of spending a year walking around the city with a sketchbook. As an ex-artist - I deserted the visual for the verbal-visual - it gave me, as always, a guilty conscience - drawing =REALLY looking.

Finally, re-epublishing - self-publicity seems to be essential, and I'm finding that very hard, especially speaking as someone who once had a publicist who later became a very successful children's author... oh, well...