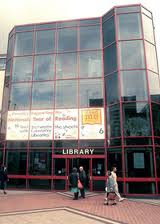 I’ve just got back from a school visit. It was just an hour with Years 5 and 6 of a local primary school. In about three hour’s time, I’m off to our Central Library to run a writing workshop for children. It’s all part of Literally - Coventry Book Festival which started yesterday (Monday as I write this) and runs till the weekend. It’s a busy week and I love it.

I’m hoping some of this morning’s youngsters will get along to the workshop later. There were some really keen readers and writers in the group. But I’m also hoping that the little boy who put his hand up to ask a question about characters will come along. His teacher told me afterwards that he never asks questions, he’s never interested in books or writing – and they were gobsmacked to see he’d put up his hand to ask such a question.

“And did you see his face when you were reading?” One of the other teachers remarked. “His eyes were almost popping out of his head!”

Another teacher was very excited about one of her Year 6 pupils. As they’d filed out of the room at the end of the session, he’d told her he was going to write a story.

“I can’t believe it!” she told me. “It’s normally like getting blood out of a stone getting him to write a word. Now he tells me he’s going to write a story when he goes home!”

School visits and (hopefully) inspiring the children has to be the very best thing about writing. I know writing can be a lonely and frustrating old game at times, so when the opportunities come along to get involved in book events, paid or unpaid, it’s worth the effort.

As part of the week-long series of talks, workshops and performances, of the Coventry Book Festival, last night, the Coventry Writers Group which I belong to, staged a performance of readings from our anthology, Coventry Tales (okay, you’ve twisted my arm) – award winning anthology!

There were short stories and poems and a mini play all with a Coventry theme. The City's most famous lady – Lady Godiva played a prominent role in some of the stories, although Martin Brown’s poem went from a different angle – he told the story in amusing rhyme from the horse’s point of view! We’d bribed our audience with promises of cakes and sausage rolls and it worked, because people turned up and a good time was had by all. 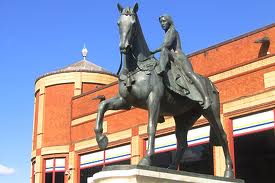 I’m really hoping that this, the first Coventry Book Festival will be a rip-roaring success. All the events, talks and workshops are free to the public, which is brilliant and the organisers have brought in lots of local authors and illustrators – such as Celia Rees, Graham Joyce, Ali Lewis, Cathy Cassidy, Alex T Smith, and lots of others who are doing talks, workshops and performances during the week. They’ve even managed to draw in some even more impressive names... Henry Winkler aka The Fonz no less, who will be doing a talk on Saturday.
If that's not enough, I’m reliably informed that Philip Pullman will be making a guest appearance at Wednesday evening’s book awards ceremony! That glittering event takes place in the atmospheric St Mary’s Guildhall – one of the City’s amazing historic buildings. I wonder if Mr Pullman will be inspired as he sits in the great hall where Parliament was once held, and where ghosts are still said to wander.
Buildings and history always inspire me, and I didn’t need much persuasion to write a Children’s History of Coventry, which (I’m delighted to say) is being used in many of the local schools. It goes from Roman times to modern days in lovely bite sized chunks of information and pictures. This morning’s class of children were really interested in it and recognised most of the places in the pictures and illustrations and knew quite a lot of their local history. 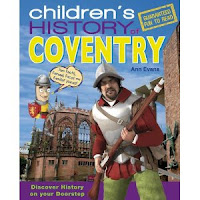 As well as taking part in events I’m hoping to get along to some talks and workshops – I’m hoping to get inspiration from the likes of Philip Pullman, Graham Joyce and Celia Rees, and in turn if I can inspire the little boy in the corner who never reads or writes, to ask a question about characters, then it’s all worthwhile.

How about you? Do you enjoy book festivals or steer well away?

Further details about Literally - Coventry Book Festival can be found at: http://literallycoventry.eventbrite.co.uk

CallyPhillips said…
Hi,
Hope all goes well for those of you involved this week. When I was writer in residence in Dumfries and Galloway, they started this little book festival in Wigtown. Now it's pretty HUGE. So if you stick with it I'm sure you'll have many happy years ahead and get many more young (and older)people interested in literature in all its forms.
13 June 2012 at 08:09

Ann Evans said…
Hope so Cally, there's certainly lots of enthusiasm around it at the moment, and ideas for next year even.
13 June 2012 at 11:43

Dan Holloway said…
This looks really super - and I love that the events are free. The session with Mez Packer looks particularly good.
13 June 2012 at 14:30