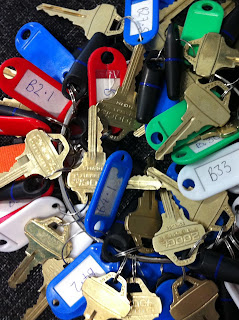 Thankfully I've never suffered writers block but then again I've never been in the position I find myself in now, where I just can't stop the new ideas from coming.

I recently took on a two-month contract for a local language school. I've been employed as a property manager (glorified house keeper) for a student residence with just over 100 rooms. It's not a job I've ever done and have no background in this type of work. I was just in the right place at the right time.

Since starting the job I've been more inspired to write than I think I've ever been before. Even the title of this post was inspired by the bunch of house keys sitting next to me as I typed these words (image to the right).

It all started on the 1st July whilst I was packing my travel bag (I'm having to sleep on site at least four nights per week). I'd just completed researching a method of constructing stories called 'accumulative' or a 'chain' story (think 'The House That Jack Built' or 'There Was An Old Woman'). The research and the action of packing merged and I'm now working on my first accumulative picture book.

Since then I've completed the first draft for a second picture book story and  I also have the first three pages plus notes for a third picture book.  Lastly I have an idea for a sit-com (a genre I've never written) based on the amusing and sometimes bizarre things I've experienced here. Three of the main characters are fully formed and living in my head with another two beginning to take shape. I've copious scribbled notes, which are being added to daily.

The lesson I've learnt is taking myself out of my comfort zone, living in a new environment and mixing with people outside my normal circles of friends has truly inspired me.

So if you're struggling with writers block why not do the same. Perhaps not to the extreme I've gone to. But perhaps just a little trip into the unknown will help. Go on it may be just the key you are looking for to unlock the box your muse is currently locked inside.

Jenny Alexander said…
Great article, Lynne - I've never really thought of taking a big step out of my comfort zone, but I definitely take a step back from the writing if it's not flowing - which may be why I never really feel like I've been blocked. I'll go to the beach every day for a week, or get the walking boots out, or visit friends up-country. I never sit and stare at a blank page!
8 August 2012 at 10:07

Dennis Hamley said…
That's fascinating Lynne. It sounds rather like an exercise I give my diploma students, based on the old technique of Prediction beloved (or once beloved, God knows what's happening now) by teachers of reading Kids are/were given the first paragraph of a story and asked to forecast what might happen in the next paragraph and so on until the end. I make it slightly more subtle by asking students not merely to guess the story but also see what words, phrases, images suggested the mood and even genre of the story, what sort of narrative it was and how these little markers might etablish these. Easy enough, but then I ask them actually to write a story like that: trying a first paragraph from nowhere and then seeing what growth points they'd placed in it, perhaps unconsciously, to enable them to continue with the narrative. In fact, to actually WRITE it as a prediction exercise but doing their own prediction as they write, so a story evolves from a position where there was no story at all, not even a ghost in the brain. I find it amazing what stories come out of this. I think it's a terrific way of generating narratives, a good exercise to get over writer's block and a technique well worth using, especially when in trouble but also for its own sake.
8 August 2012 at 10:23

Ann Evans said…
Interesting post Lynne, and great to hear you're bursting with ideas. My way of avoiding writers block is to have lots on the go, so when one thing isn't flowing, switch to something else. Alternatively go for a nice long walk. I decide what I'm going to think about before I set off and usually the block has been sorted by the time I get back.
9 August 2012 at 16:16