Once upon a time - not that long ago - there were no university courses or blogs to teach you how to write, find an agent or get your work published. I learned my craft by writing short stories for little magazines produced in people’s garages, in the process getting valuable feedback from other subscribers (who were also new writers looking for feedback, too). So in a way, I suppose it was a bit like a writing course – only cheaper, and with the students scattered across the country. 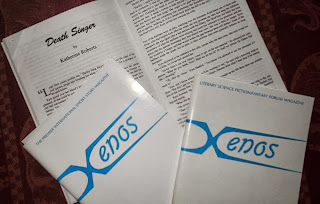 One of the short stories I wrote back then was called Death Singer, a fantasy tale set in a vaguely Greek temple that trains young Singers to give song therapy to criminals sent up from the city below. This story was published in 1994 by Xenos - a small SF/Fantasy magazine, which also published the early work of authors such as Rhys Hughes and Cherith Baldry.

If anyone had told me, back when I wrote Death Singer, that it would grow into my first full-length novel Song Quest, which would go on to win a prestigious children’s book award and become a trilogy (The Echorium Sequence) edited by the man who discovered Harry Potter and be published in America by Scholastic, I would probably have laughed at the whole idea. But that's exactly what happened.

You can’t read the Echorium trilogy in ebook format yet, since I have been waiting for the publisher who re-issued Song Quest in paperback last year (left above) to bring out the digital version. But I hope to make the other two titles Crystal Mask and Dark Quetzal into ebooks before Christmas. And meanwhile, another exciting thing has happened to my original short story Death Singer, which I’d quietly slipped into an ebook collection back when I was experimenting with Kindle publishing in 2011.

One day I had an email out of the blue from Spanish language student Ana Posada, who had chosen to translate Death Singer into Spanish as part of her university coursework. Since my story contained fantasy elements, she needed to ask me a few questions so she could translate these properly, and I was more than happy to help. After she sent me the translation, I had the idea of publishing the two languages side-by-side in a single ebook for people who might be learning English or Spanish as a second language. Ana was agreeable to this, and so we produced the dual language ebook Death Singer / La Musa de la Muerte. 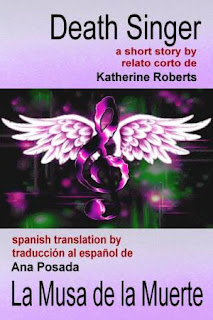 Now, I don't know very much about the Spanish language ebook market, so at the time I was unaware of any other similar dual language short story titles, though I felt certain there must be some. And, sure enough, after having the ebook on a free run with Amazon Select, I noticed other dual language titles coming up in amazon’s 'also bought' section. A few clicks on my Kindle later, and I came up with a whole list:

I downloaded La Mujer Alta to see how our ebook compared, and noticed the Doppeltext book contained an interesting version of the story with the English and Spanish texts mixed sentence by sentence, along with some clever hyperlinked cross-references. Despite having some Spanish blood on my mother's side, my Spanish is certainly not up to anything fancy like cross references, but I liked the mixed text approach. So I created a third version of Death Singer/La Musa de la Muerte, with alternating English/Spanish paragraphs rather than sentences, preserving some of the original story flow.

Readers now have the choice of reading the complete story in English, the compete story in Spanish, or paragraph by paragraph to compare the two languages - all for just 99 cents (or the equivalent local currency). Ana and I hope you find it useful! 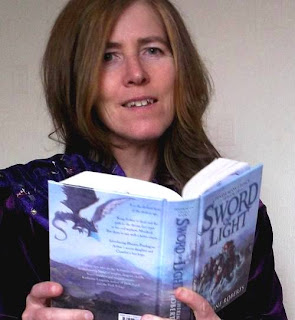 Her latest series is the Pendragon Legacy quartet about King Arthur’s daughter, published in hardcover, paperback and ebook by Templar for readers aged 9-12 (and if you know a young reader with a Kindle, today is the last day you can download the first title Sword of Light for just 99p!)

Katherine's backlist titles, including her Seven Fabulous Wonders series, I am the Great Horse, and Spellfall, are now available as ebooks from Amazon, Apple, Nook, and Kobo. The Kindle edition of Spellfall is on special offer for the Halloween weekend at 99 cents / 86p.

Debbie Bennett said…
Hi Katherine! Good to have you back with us! I too was pubbed in Xenos. Issue 13 - and it was one of my first short story acceptances I think.
31 October 2013 at 19:13

madwippitt said…
What a great example of combining talents! Something in Latin next please?
31 October 2013 at 22:22

Katherine Roberts said…
Debbie, it's great to see all the names who were in Xenos etc. publishing books now! This post went up while I was in Brighton at the World Fantasy Convention, and that reminds me I have let my BFS membership lapse again. Maybe see you next year in York?

Madwippit, my Latin is even worse than my Spanish. But cool idea. Are you offering...?