Did Anybody Ask The Author? - Alice Jolly

By Alice - June 04, 2015
Three weeks ago Unbound, who are my crowd funding publishers, got in touch and asked me if I'd like to come to London for a day. They had organised a meeting room and lunch at The Globe Theatre for a group of authors, some of whom they publish and some of whom they don't, and they hoped I'd come. The reason for the meeting? They wanted to ask authors what they think about the publishing process.

Yes, they did. They really did. Honestly. I stress this because, anyone who has been in the writing business for a while will be reading this with their mouth hanging open. When has a publisher ever asked an author what they want? I decided that I better cancel my plans for that day and get there. After ten years of not being asked what I want, I was gasping for the opportunity to say a few things myself - but perhaps even more interested in what other writers might say.

The day was led by John Paul Flintoff, who is an Unbound writer, and also by Dan Kieran who is a writer himself but is also one of the three founders of Unbound. Nicola Solomon from The Society of Authors also generously showed up. We were told we could ask any question we liked and everyone wrote their questions down on sheets of A4 paper. The questions were enormously varied. They ranged from the technical to the philosophical and back again. 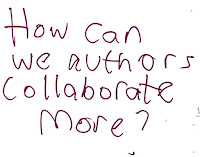 Everyone split up into groups. You could join any group you wanted and leave it at any time. I listened to discussions about many different issues. Why can publishers never tell you how many books you've sold? Should writers put any of their work up on the internet and, if they should, then how much? How well does independent publishing work and who does it work for? When the electricity finally goes off will we be reading books for comfort of just burning them for fuel?

I met many new and interesting people, had a delicious lunch, found out plenty of things I didn't know, resolved to find ways of making my writing life more sociable and fun. The day did not, I admit, come to any great conclusion. But everyone involved went away feeling empowered, invigorated, hopeful. The victim mentality which, let's be honest, does sometimes take over when authors meet was nowhere to be seen. Suddenly we all felt that books matter and that publishing them is exciting - which it is - but that can be too easily forgotten.

However, perhaps the biggest question for me was - why hasn't this happened before? It isn't very complicated to book a room and bring writers together. Any publisher could do it but they haven't. Their general attitude to authors is Divide And Rule. Don't let the devils out of their box.

The bitter truth is that many writers are so isolated and embattled that, if you buy them a cup of coffee, they immediately feel loved and cherished. A little bit of being-kind-to-writers goes a very long way. So you can imagine how much goodwill Unbound generated by doing this. Simple, isn't it? But I don't think it has happened before.

Kathleen Jones said…
A brilliant post Alice! I think this is one reason why so many authors are going 'indie' - it's the feeling of empowerment.
4 June 2015 at 05:05

Andrew Crofts said…
Let's hope other publishers mistake this courageous initiative for a bandwagon and leap on board - if only for a short ride.
4 June 2015 at 08:16

Umberto Tosi said…
Working with writers makes sense for Unbound, and not just as good will. Publishers can provide channels, but writers bring the fire, and generally know their audiences. When I was involved in regional publishing, we worked closely with our select writers, unlike today's corporate giants for whom authors seem to be more a commodity than a resource. Moreover, nowadays, everyone knows that writers can publish themselves successfully, if they choose - and don't mind the sweat - and have many choices in recruiting help on their own. So, it pays for a publisher to be nice, and in the process, learn how best to package and promote each book - and keep their best authors coming back.
4 June 2015 at 10:18

Lydia Bennet said…
Sounds like a great day and very encouraging! At one time 'bigger' publishers took authors out, some still do, but not en masse. This kind of notice being taken is very invigorating and empowering, and as you say is sadly rare.
4 June 2015 at 11:30

Catherine Czerkawska said…
I have to say that my current fiction publisher (unlike every other publisher I have ever had - so you're right, Alice!) is extremely good at communicating, at asking me what I want and what I think and generally seems to see the relationship as the proactive partnership it should be. But this is incredibly rare, I'll agree. And many of their authors already know each other, so we do communicate and get together at launches and on Facebook too. And of course I'm still self publishing as well. I think the regional get-togethers of the Society of Authors fulfill something of this function too. They can be empowering even though they don't often involve publishers. The solution is, I've always thought and still do, for us to become much more businesslike in our dealings with each other, looking for a good mutual respect and friendship of equals where possible, rather than the 'love in' I sometimes see between writers and publishers or writers and agents.
4 June 2015 at 12:31

Alice said…
Thanks so much for all the comments. All very thoughtful and helpful. I remember, quite a while ago, speaking to Kathleen about independent publishing. Not the money or the technical stuff or the contracts but the feeling of liberation ..... That conversation really made me think hard. It changed my ideas about a lot of things. The whole agent and publisher question can just be such a huge weight on your shoulders that it makes you stop wanting to write at all. I'm just so glad that there are other options emerging.

Nick Green said…
Blimey, what next? Asking turkeys whether they want sprouts or parsnips?
4 June 2015 at 13:33

Unknown said…
Excellent blog. I do hope publishers and agents do read this. Communication is essential in all walks of life. As Catherine says, a'businesslike'relationship is fine with clear, timely communication between the the writer and publishers. Well done to Unbound and thanks for sharing it.
4 June 2015 at 13:40