By Fran B - September 02, 2016
I have always been drawn to books in which the setting is one of the principle characters. It may be the landscape like the wild Cornwall of Du Maurier's Rebecca; or a building like the echoing corridors of Thornfield in Bronte's Jane Eyre; or even a claustrophobically small space, as in Emma Donoghue's chilling Room.

My second novel, The Ball Game, published in 2009, was completely inspired by its setting. I had no characters or plot or even the embryo of a storyline in my head when I decided to write it. I was a student at St Andrews University in the (for me, slightly) swinging sixties. Those were four wonderful, unforgettable years, so utterly and completely different from the life that followed them that, if I thought about them at all, it was always with a sense of unreality. Did that really happen to me? They were like a book I had read or a film I had seen only ever once, adored but never returned to.

Until, in the summer of 2006, I found myself spending a week in St Andrews at a Christian festival. Bucking the trends of summer festivals in Britain, there was a total absence of rain and mud. The tented village basked in unrelenting sunshine and there was not a welly boot in sight. My extended family had hired a three-storey house on Market Street, one of the main thoroughfares of the ancient town. I rose early and walked my dog along the beach and around the town before the heat of the day made such exercise too much for us both. 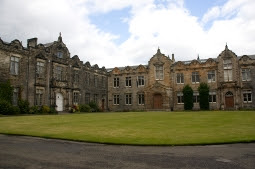 St Andrews is, of course, a beautiful and famous old town, its centre full of antique, A-listed buildings, from which the rapacious hand of modernity has largely been stayed. For sure, the insides will have changed: there will be fitted kitchens, ensuite facilities, widescreen TVs, remote-controlled heating systems; the students' roll-top bureaux I remember will have been replaced by desks sporting computers. But externally, the dear old place still looks the same. On those early morning walks, I could close my eyes and see my friends and me, in our red gowns hurrying to lectures.
I could hear the voices, smell the smells and taste the tastes of that bygone age. I was filled, not just with nostalgia, a rather depressing emotion, but with a longing, nay, a determination, to take myself back to that time and relive it.

Of course, the received wisdom is that one cannot/should never go back: it will only be a disappointment and spoil the memory. But authors can thumb their noses at that dictum. They can go back on their own terms, recreating the best of it, plundering the memory banks for characters, dialogues, episodes and descriptions, taking control of the backward journey. Over the next year, I wallowed in my memories, slipping back to St A's several times to drink at the fountain of my inspiration: the town, the university, the beaches, the streets and wynds, the unchanged old cinema, the countryside around . . . I had only to sit down with my laptop and picture it for the characters to spring to life and begin to interact, creating the story. Of all of my four novels, it is truly the one in which I was as enthralled as I hoped my readers would be, having no idea what was going to happen from one writing session to the next. No character studies and back stories; no plot arc; no chapter plans; no research 'folder' in my computer.

It should have been a recipe for disaster but somehow it all came together and a novel emerged which seems to have been enjoyed by readers and is praised as having ‘many likable (and a few unlikable!) characters with plot twists and turns which will leave you hooked’ and even being 'well-crafted'. If only these Amazon reviewers knew! The power of the setting can clearly not be underestimated. 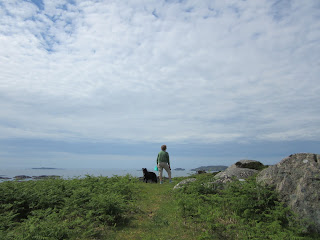 My fourth novel (at the first-draft-rewrite stage) finds me back in setting-inspired mode. It was inevitable that my love of the Hebrides, fostered over twenty years of holidays in the family house on the Isle of Iona, would one day work the 'setting magic'. I shall be taking a trip to the Mull Museum in Tobermory in a week's time to meet up again with the archivist there and get her appraisal of the period and place authenticity of the draft (it's a ghost story set on Mull in the 1920's).

Stunning scenery, golden eagles, seals and dolphins, air so clear it fizzes like champagne, Highland hospitality and no doubt a wee dram of Scotland's most famous export. This is me with my dog on the Isle of Mull . . . working hard at my research . . . honestly! As they say, it's a dirty job but someone has to do it.

Wendy H. Jones said…
Setting is so important in a novel and helps to anchor the story. The same story, written in a different setting can change dramatically..
2 September 2016 at 06:06

Sandra Horn said…
Great post, Fran - thank you for reminding me that sometimes the magic of a place is all you need to get the creative juices flowing and just let the story unfold itself.
2 September 2016 at 09:23

Fran B said…
Gosh, Wendy. That is so true. Are you planning to make DI Shona travel to another location? Peter May's Glasgow detective gets sent to Lewis with great results.
2 September 2016 at 15:00