Magic, demons and the 7 Deadly Sins by Griselda Heppel

By Griselda Heppel - November 01, 2016
In my wildest dreams I never thought I'd get a Double First. (I'd happily settle for a Single First but that's not going to happen either.)  So I'm enjoying the pleasing double ring in the fact that today, First November, I'm posting my First Ever blog for Authors Electric.
It comes the day after a somewhat strenuous school visit, in which my aim was to persuade 40 Halloween-fixated Years 7 and 8 that stories of pacts with demons, crystal balls, charms, spells and alchemy, all dating back hundreds of years, are at least as exciting as pointy hats, plastic orange pumpkins and wriggly worms. I'm pretty sure I succeeded. Mostly.
Even more important - and this is why I love school visits - is the chance to enthuse children with the sheer magic of books themselves. Some will be keen readers already. Others, not yet, but give them a glimpse into other worlds and you never know when they may follow it up. My favourite books as a child were either retellings of great myths and legends - T H White's The Once and Future King, Roger Lancelyn Green's The Tale of Troy - or stories that recreated a classical world of monsters and magical creatures, such as C S Lewis's The Narnia Chronicles. These were all terrific stories in their own right: I didn't need to know anything about Malory or Homer or Ovid to enjoy them. Only much later, encountering those authors at university, the feeling of coming home I experienced filled me with an even stronger appreciation of the writers I'd loved as a child. They really, really knew their stuff. More, they were determined that children should have the chance to know it too.
So when, at the end of my talk (sometimes during, which can be distracting but hats off for enthusiasm), somebody asks, 'What made you become a writer?', the answer is easy. I had to. Because while you'll find hundreds of books by excellent children's authors based on King Arthur and the Greek and Roman gods and heroes, some of the world's greatest literary works have been ignored in this respect. 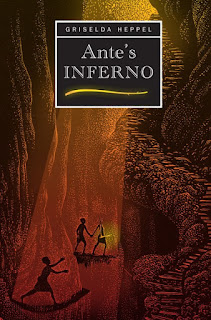 Dante's Inferno, for instance. A brilliant, grotesque imagining by the poet of descending through 9 circles of Hell, based on the classical underworld, complete with Cerberus, harpies, furies, Minotaur, rivers of blood and fire - surely it could only be a matter of time before somebody made this into a cracking children's adventure story? Well, I waited... And my own children grew up a bit and gave me more space to think... And one day I decided enough was enough and sat down to write about a girl called Ante (Antonia) who finds herself plunged on a dark journey to the heart of Hell, guided by a mysterious boy called Gil.  I wrote the kind of book I'd have loved aged 12 and when Ante’s Inferno (Matador, 2012) came out, was delighted to find plenty of 9 - 12 year olds out there who feel the same (enough to vote Ante's Inferno to win the Peoples Book Prize).
Why did no one do it before? My guess is that people assume that Dante, a 14th century Italian poet studied by theologians and academics, must be too difficult for children. In my experience young people are often underestimated in the kind of ideas they can grasp and enjoy. In my school visits, I sketch in a few details about Dante and the purpose of the Divine Comedy. I invariably find the audience fascinated by the idea of a Hell based on myths of the underworld (some of which they know), arranged into individual circles for different kinds of wrongdoing. Many of them want to read Ante's Inferno as a result (hurrah!) but more importantly, they've been given a taste of the great wealth of literature and legend that's out there.
Which brings me to the topic occupying my current school visits. Not Greek legend and the Seven Deadly Sins - also very popular with children, incidentally - but Elizabethan magic and devilish bargains.  Perhaps you can guess the inspiration behind my latest book, The Tragickall History of Henry Fowst, in which a 13 year-old boy, finding himself in a spot of bother at school, hits on the brilliant idea of summoning supernatural aid.
Unfortunately, entering into a pact with a helpful fellow called Mephistopheles lands Henry in rather more trouble than he’d bargained for….
7 Deadly sins Authors Electric Blog demons Griselda Heppel Indie writers magid

Umberto Tosi said…
Welcome, Griselda and thank you for bringing us your magic! These books sound wondrous for any age! :)
1 November 2016 at 16:26

Dennis Hamley said…
Late to this, Griselda. But what a great post to start with! ;- and how I agree with you about the general underestimate of children's capacities to understand the difficult and, in Dante's case, enter into the sublime. Adult underestimate of children has been the besetting sin of British education for centuries and has cost us dear. I started off with a novel about medieval drama. It was definitely a case of 'They laughed when I sat down to write...' When I was teaching, I was often appalled by some teachers' near-contempt for the kids they taught. Yes, going into schools is wonderful.

Anonymous said…
So glad I'm not the only one in this battle! Thanks for this lovely comment, also for inviting me on board. Onward and upward!
2 November 2016 at 16:25