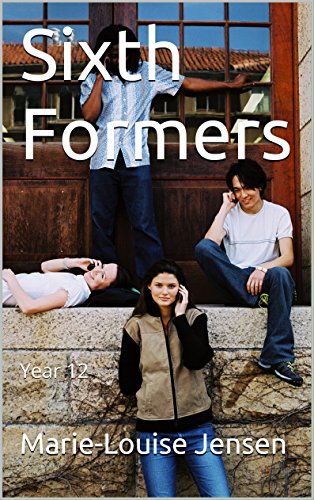 It can be tricky to pinpoint the moment when you first had an idea for a book. And with my Sixth Formers, I didn’t even plan to write a book. I just sat down to write a scene, based on an amusing anecdote my son had told me.

At first, I didn’t have the voice right and I was disappointed with how it came out. But instead of putting it aside, I kept trying. Over the next week or so, I played with different characters and ideas. I still didn’t plan to write a novel. And then one afternoon, I tried writing first person in the voice of a teen boy character I’d created and suddenly voice, story and concept all came together and I was completely hooked.

I’m normally a historical fiction author, with a number of teen and 9-12  novels traditionally published by OUP and Fiction Express. I love stories set in the past. But every now and then, you need variety. For me, Sixth Formers was a huge change, and it was as refreshing as a cool shower on a hot day. I had, after all, just had two sons go through sixth form, so the life, issues, the preoccupations and the challenges were very present in my mind. It brought my own sixth form back to me in quite a powerful way. Although this story absolutely isn’t a tale of my own sixth form - which is so long ago that it might almost as well have been in the dinosaur era for its relevance to the experiences of today’s teens.

There is at least one resemblance between my sixth form and today’s, however; these two years is a way stone between childhood and adulthood. You’ve chosen your subjects. You are still in school but planning the next step into higher education or work. You are still being nurtured, but you are being trusted with more freedoms and responsibilities. A time to try out more adult friendships, and often more mature relationships too.

Sixth form is a time of freedom, but also tremendous pressure, especially in today’s competitive environment. I get frustrated when older people say that A-levels these days are easy, everyone gets an A*, because they are not and they don’t. I think there is a tendency to underestimate the pressures on young people today and what impressed me most in my own sons and their friends was their awareness of these and the maturity and humour with which they often approached them.

The two years in sixth form is also fun, though; a time when you are surrounded with other people of your own age and stage. Sixth Formers was my first attempt to write humour and this was a learning curve; a very enjoyable one. My experience is that the first draft is rarely that funny – humour is something I need to layer in on successive rewrites. It was a lovely way to work. I often ended up crying with laughter as I edited while my sons rolled their eyes in another room in the house because ‘Mum’s laughing at her own jokes again.’

I chose to self-publish the story on Kindle because being upper-end YA there simply isn’t enough of a market for it. It is a bargain at 99p, because for this story, my main wish was to share it rather than leave it on a memory stick somewhere to go out of date.

You can read the beginning of the story for free here:

Ann Turnbull said…
I read this story a while ago, Marie Louise, and had been meaning to write and tell you how much I both enjoyed and was horrified by it! I think life for teenagers now is so much harder than when I was young - and indeed since my children were young. Definitely recommend this book.
30 November 2016 at 10:41