Desperation and Inspiration by Sandra Horn

The idea is to spend AT LEAST an hour a week reading poetry (no hardship!) and at least an hour writing. I also had what I thought was the bright idea of keeping a week ahead to allow for unforeseen spanners in the works. I still think it is a good idea, except that it makes me panic if I can’t keep it up. Not so good. Each week, there is a theme, a writing prompt and some illustrative works – ie poems on the given theme by established poets – all to get the juices flowing. Sometimes the illustration poem is so good that it’s hard not to get discouraged from the start, but I’ve been trying to counter that by heading off in as different a direction as I can. So, for the ‘Weather’ poem (Ted Hughes ‘Wind, Anon ‘Westron Wynd’, John Donne ‘The Sunne Rising’) mine is a first person comment from a snowflake. I have no idea whether it’s good, bad or indifferent (it is flakey, though), but it’s MINE and the best I could do, which I think is the salient point. 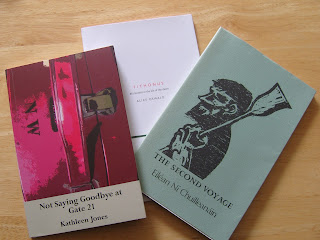 So there I was, happily immersing myself in the tasks, enjoying reading lots of poetry, when the phone rang. A friend telling me that someone needed his book proof-read and she’d told him to contact me. ‘Fine,’ I said, ‘of course I will,’ I said. Didn’t think to ask anything about it. It came. It’s the size of a breeze block. It’s repetitive and full of typos and dates. Many, many dates: ‘On Wednesday April 23rd, X happened. Two days later, on Friday April 25th, Y...’

There was nothing to do but get on with it. I had made a reasonable start when the typesetter contacted me and said she didn’t like the way the dates were set out in the original MS. Could I change them from Month-Day-Year to Day-Month-Year? I started again... The problem was, the more work I did on it, the more my brain seized up! I was befogged. No space in my head for creativity.

I have now,  finally,  finished the proof-reading, apart from a couple of queries I need to sort out with the author, but by the home stretch my poems were deteriorating into desperate doggerel as I tried not to get behind with the schedule, thinking I’d never catch up if I let things slip. I realised, too, that I’d been reading others’ poems without actually taking anything in – much too fast and all of a dither. The trouble with losing the plot like that is not being sure that you can ever get it back. Despair set in, which only made it all worse.

Then I remembered the poet M.R. (Meg) Peacocke mourning the fact that when she’d been unwell and hadn’t been able to go out for walks, it had adversely affected her writing. She found the rhythm of walking conducive – or necessary, perhaps - to producing her poems. She had also said that in order to write creatively, one needs to be able to access the space in the brain where daydreams arise. Walking and letting the mind drift pleasantly, leaving space for something to appear and settle; those were the precursors. It was time to put her wise words into practice. 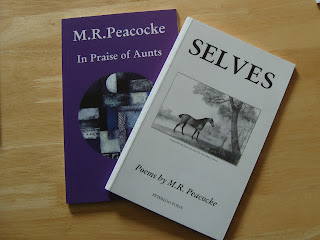 We live in Southampton, a busy city port, which is never still, never quiet. We’re opposite a large and very pleasant Common, which is always crowded with joggers and dogs. The upside – and it’s  a very big up – is that we’re very close to some gorgeous countryside and seaside.  Yesterday, after I’d  closed the breezeblock and put it aside, we drove to Keyhaven  and walked along the sea wall between the sea and the salt marsh.  It was sunny, with high scudding clouds. Gorse was pumping out its lovely warm coconutty scent. A heron fished in the shallows. Waders probed the mudflats. A poem started to form. No doggerel this time.  It’ll do. 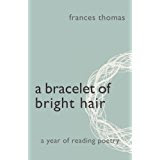 Anonymous said…
I guess the publishers of the breezeblock aren't expecting an American market, or you'll have to change the dates all back again!

Lovely post, with a perfect arc, poetic in itself. The seaside image at the end, drawn with such economy, comes across beautifully. I'd love to read the poem.
20 April 2017 at 10:24

Bill Kirton said…
A brave undertaking, Sandra - in fact TWO brave undertakings: the poetry challenge and the Breeze block. Congratulations on sticking with the latter. I think I'd have given up.
20 April 2017 at 17:25

Sandra Horn said…
Thank you both for your kind comments.
Griselda, you are welcome to see the poem but I should say that it's not a great piece of writing - it's about suddenly needing to find a name for a child I miscarried more than 30 years ago - so it was something I needed to do, which came out of nowhere on the walk, in the mysterious way these things do.
21 April 2017 at 15:52

Anonymous said…
Both sad and intriguing! Yes, I'd like to read it if you are happy to share. I could send you my email address via facebook message when you're ready.
22 April 2017 at 19:46