By AliB - April 22, 2017
Much ink is expended and tears shed over choosing the title of a novel – that perfect hook to grab you more customers – or any customers. But what about a short story? I used to think those weird and wordy titles appearing in the shortlists of writing competitions were a bit of an affectation. Do we need the title to be almost as long as the thing itself?

However, having read submissions for a number of short story events and as co-judge of a local short story competition (yes, I am knee deep in short stories!) I am revising my opinion. A short story, by definition, has to pack a punch in a restricted number of words – in the case of flash fiction even fewer words. Not using the title to contribute to that punch seems like a wasted opportunity and although I haven’t ruled out any story because of its title (yet!) I’ve been disappointed by the number of short stories that fall short in this respect.

But what makes a good short story title? I’m not sure but I always know when I’ve found the right one. Conversely, if I feel there’s something wrong with my story title, it’s often a signal there’s something wrong with the story.
I’ve been trying to firm up my opinions and have looked at a couple of short story collections in my possession (our own Flash in the Pen 2 and A Box of Stars Beneath the Bed, published last year for National Flash Fiction Day) as well as my own ‘oeuvre’ (!) to see if there are any rules about what works for me. I haven’t added author names here but do investigate each of these anthologies for some brilliant writing.

So what about the titles?
Single word/concept titles are risky, but of course it all depends on the word. The Interview works, I think because it’s an emotive concept and one which puts questions in the reader’s mind – what kind of interview? – are we going to hear about the interviewer or the interviewee? The Jumper is also quite intriguing, and Sunday Morning can evoke such a variety of scenes and emotions I’m interested to explore. Park Bench with all its potential for an interesting meeting or interaction also works for me. But a single word can sound merely descriptive of the plot, telling too much about what’s going to happen – answering its own question if you like. Using a single Christian name or X’s Story also feels like a cop-out unless it’s a name with a great sound (see below) or special resonance.
An unexpected combination of words is a good plan, and I was pretty happy with my Mouse Years (the age of a mouse and the period of time when it lived with the human protagonists). Serious Music is also good, but beware of having something that jars too much or in an effort to be eye-catching just fails to make sense.
An action as title will have its own dynamism – I like Preparing for Winter and The Door Closes or When She Was Good - which of course is part of a well-known saying. It’s fine to use memorable phrases and quotations, as long as they fit the bill and assuming there is a degree of ambiguity or irony in what follows. Beware of puns or wordplay that might give away the plot, although I admit I do like Fears of a Clown in the way it turns the usual saying on its head.
And of course you can simply steal your title from an existing song, book or poem as titles are not covered by copyright except in some very particular circumstances. But be careful not to disappoint on your 'version' of  someone else's favourite.
Final point for now is that titles should sound good, which is why I like I Go on the Morrow to Murder the King, or A Quiet Afternoon in the Museum of Torture – rhythmical and surprising. I’ve just written a story called The Children of Osipovici simply because I liked the sound of it and wanted it to be the title of something!

Looking at these fairly obvious suggestions, it seems to me that giving a name to a story is not so different from naming a novel. The title needs to be memorable and can do this by posing a question, suggesting an ambiguity, or playing on a familiar phrase or concept - some do all of these at once. And try to make it easy on the ear. In short it must call to the reader  - and then of course, it has to follow up on its promise!

Next time you write a short story, imagine it as a book, lying on the bookshop table.  What would you like to see on the cover? A good short story takes a lot of effort to write. Don’t sell it short by skimping on the title.

Ali Bacon's story Silver Harvest has just been published in the Magic Oxygen Literary Prize Anthology. You can see the titles of some of her other stories on her website here and here. 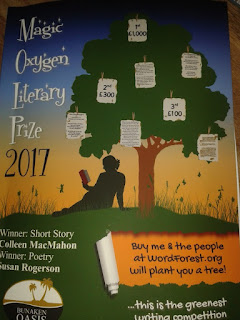 Umberto Tosi said…
Well put, indeed: Every good story is entitled to a snappy title and the trick is finding one that intrigues and fits best. I always start with a working title and I'm surprised how often it turns out to be the one.
22 April 2017 at 10:20

Bill Kirton said…
Ah, the agonising over titles - for novels and stories. I agree with all the categories you suggest, Ali, and I like your examples. But I also think there may sometimes be a special title alchemy. By that, I mean on many occasions I've spent months (and, for my most recent novel, years), seeking and trying out titles for a WIP, then suddenly, one day, when I'm not even thinking about it, something pops into my head and I know at once that it's the right one.
22 April 2017 at 11:14