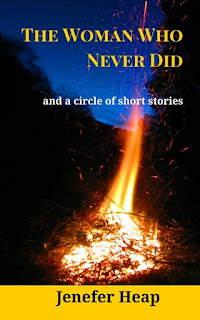 Without characters, there can be no stories. Whether your protagonist is Sherlock Holmes, Emily Dickenson’s dog, or a dining room table, they have to be believable within the realms of their fictional world. So how do writers go about creating satisfying, rounded characters?

The stories in my collection The Woman Who Never Did are mostly character driven, so I’ve spent a lot of time trying out tricks to bring them to life. There’s plenty of advice out there in books and on the internet to help you develop your character, whether they originate from real life or your imagination or, most often in my case, both. Here are some of my favourites: 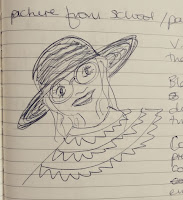 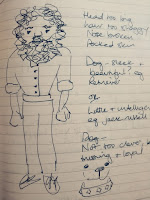 Sometimes I draw pictures (not very well, as you can see). The lady in the hat is Amanda from The View from the Penthouse Apartment and the heavily bearded man is Beastie, whose story isn’t finished yet. Annotating the drawings helps me focus on specific details and the effect I am hoping to achieve through physical appearance. There are lots of other tips and tricks. Just google ‘character development’ and take your pick (other search engines are available). Even though a lot the details won’t make it into your short story, or even into your novel, the work you put in will help to make your character live beyond the page. 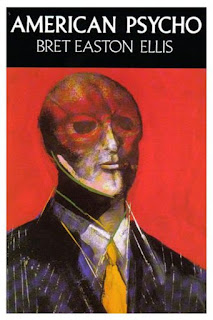 But do these living breathing characters need to be likable? In particular, does the hero/heroine/ main protagonist need to be likable? Ask Brett Easton Ellis – I thought Patrick Bateman, the (anti)hero of American Psycho was the most unpleasant character I’d ever come across, but that didn’t stop me engaging with the book. I don’t feel I need to like the main character, or characters, so long as they are compelling and I feel strongly about them. I want to care about the outcome of the story – even if that caring manifests as a desire to see them come to a sticky end. I certainly wished such an end for Patrick Bateman, but my feelings towards Mervyn Peake’s Steerpike (of Titus Groan and Gormenghast) are more complicated. Early in the narrative, I’m firmly on his side against the suffocating and repressive society in which he is trapped. But, as Steerpike’s resentment festers and his mind becomes as twisted as the dark passages of Gormenghast Castle, my sympathy seeps away. 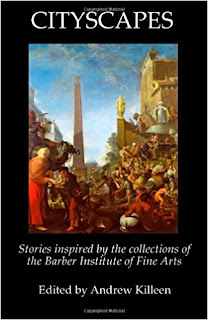 Besides, likability is such a subjective quality, very much in the mind of the reader. There are some characters most readers would agree to be engaging and likable, JRR Tolkien’s The Hobbit, for instance. Yet I have a friend who can’t stand Bilbo Baggins and finds himself rooting for Gollum every time! As a writer, I’ve experienced a similar reaction to one of my own characters. A few years ago, I was involved in a project run by Andrew Killeen (author of The Khalifah's Mirror and The Father of Locks) to produce a book called Cityscapes. A group of writers came together to write short stories inspired by exhibitions at the Barber Institute in Birmingham. When I came to read my story, Lulu’s London, opinions were divided. Lulu was a character with a chequered past and a confused present – half the room loved her and half the room hated her, but no one was indifferent which made me very happy.

Personally, I have a soft spot for characters who seem nice, but whose nastier traits are gradually laid bare as I read (or write) further into the story. And that leads us back to the importance of creating characters who are satisfying, from all 360 degrees. Perhaps the key is the understanding that nobody is totally evil or totally good. Nor should we expect our characters to be. The scales may shift as the plot progresses and, as in real life, the balance may not ever be fully resolved.

Jenefer Heap started writing in hotel rooms to keep her out of the bar. Then she won a competition, had two children, and published her own book, The Woman Who Never Did. As Jenny Heap, she is a founder member of StoryVine and writes rhymes about toast and poorly pythons for a younger audience.

Jenefer also comperes the ‘Words’ open-mics at The Globe in Warwick and is currently putting together a collection of pieces written mainly for performance, working title Women in Shorts, which she hopes to publish later this year.

Debbie Young said…
Great post, Jenny - and I especially love the drawings of your characters! I'd never thought of doing that, and although my drawing skills are minimal, I think it's a super idea. I suspect that sketching a character like that will also stimulate the subconscious to flesh out the person in your head at the same time, so it's about more than just creating a physical approximation of their likeness.

I love the title of your WIP and look forward to reading it once it's published.

Jenefer Heap said…
Thanks Debbie. One of the reasons I love writing so much is because I can't draw very well - I can draw a pig so you know it's not an elephant, but not so you can tell if it's angry or just suffering from indigestion! All the same, drawing the character does make you think about their appearance in greater detail. Usually, however, I wouldn't let those sketches out of my notebook...

AliB said…
Hi Jenny - lovely to see you here and a reminder of how much I liked the Woman who Never did - I think i even blogged about it here a while ago! Looking forward to the next one. A.
1 June 2017 at 10:37

Jenefer Heap said…
Delighted to be here, Ali, and thank you for introducing me to Authors Electric. What a feast of interesting blogging!
1 June 2017 at 22:58