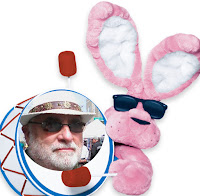 I turn eighty on the 16th of this month. In a global perspective, this will amount to a mere 30,000 days, roughly, or some 700,000 hours of puttering about this four-billion-year-old rock spinning in space. It covers a lot of ground for me nonetheless as I continue to strew my path with printed words. As it turns out, May also marks two years since I started blogging with my fellow esteemed Authors Electric. I'm not much for reflection, but now is as good a time as any. Like golfers, symphony conductors, Colonel Sanders, and the Energizer Bunny, writers seem to go, go and go until they stop. That's my intention, anyway.

I detect little change as my odometer rolls into its eighth decade. I have half-dozen projects in process, none of which I can guarantee will come to fruition. Among them: a speculative fiction novella and my autobiographical novel, The Einstein Express, and a sequel to Ophelia Rising. for which I keep gathering string.

This year's to-do list also includes publishing a collection of my short stories. Meanwhile, I work on short stories and blog where I'm invited and find it interesting to do so - most recently, a review of Sir David Attenborough's Planet Earth 2 for City Creatures. Good to stay visible, and do what else I can to push the books I have out there. There's more, but just typing out this list makes my head spin. I melt into a puddle of black ink from which I take refuge in watching random YouTube videos like waking dreams.

When I started putting words to paper as a 1950s post-pubescent lad who had no idea what it was all about, I didn't give much thought to living past 30, give or take the prospect of cold war nuclear annihilation and the know-it-all bravado of youth. I did, however, always take it as a given that I would keep scribbling as long as I was lucky and able enough to do so - out of compulsion more than dedication.

Up through my fifties, I spent nearly all of my working time at various editing jobs and churning out news and feature articles for the various newspapers and magazines. I made scant time for writing creatively between job and family and a few ill-begotten get-rich ventures. Initially, the writing went nowhere. I would sequester myself in a room with my trusty Underwood typewriter and stare at blank paper. I'd type a few paragraphs or pages and run smack into a white wall. I didn't know enough to realize that as part of the process, only a sign of shameful failure. How could I call myself a writer?

I may or may not have taught myself to write better over the years, but did learn a lot about myself while I gathered what wisdom I could about the creative process - enough to realize, for better or worse, that my vapid swirls were no different than those of others who have tried to string words into narratives over the centuries.  My advice to young writers would be to keep writing until your words lead you somewhere you didn't figure on going. Otherwise, I would follow late Kurt Vonnegut's example when he offered the younger generation, "our sincerest apologies."

I only began writing fiction in earnest about ten years ago - as a septuagenarian - just in time for the digital publishing revolution that has confounded the industry but given authors independence and advantages that we are only beginning to utilize fully. It's not a panacea and does not supplant traditional print publishing. Bookselling was never easy even partnered with major publishers. Indie publishing, however, allows us speed, creative control, and liberation from the fascicle consumerist mentality common among corporate gatekeepers. I can attest to that, having sat on both sides of those desks. Traditional publishers can be our friends, but no longer hold the sole power to determine if work is even printed or read by anyone.

It's no longer winner-take-all in which only numbers matter. There are millions of readers out there with myriad tastes and desires to match the full spectrum of our artistic works. We can experiment. If one work doesn't come out the way we like, we can produce another without worry about burgeoning capital costs and squandering advances. As I sail into my ninth decade, I content myself knowing that people are reading my stuff, thus completing the creative circuit that keeps the light on.

What my legacy will be, if any, is anyone's guess and not worth dwelling upon. Some writing enlightens generations and changes history. Most of us are lucky if our writing provides some measure of entertainment and insight to its readers. I only want to do my best to write with as much honesty and compassion I can muster at each sitting.

My bet is that my four beloved children, Alicia, Kara, Cristina and Zachary - each individually extraordinary - count for lots more than any collection of volumes. I fear for them - and their children - now more than ever. A lot has changed since I was born - the Internet, jet travel, DNA, nuclear weapons, space satellites, AI - but it seems that humanity hasn't learned much. Fascist demagogues pandering to ignorance, resentment, and intolerance are ascendant in Europe, Asia and America, all too reminiscent of 1937. Let us write and work for better outcomes. We owe no less to those who follow us. 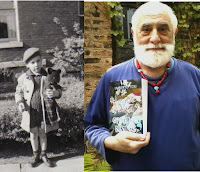 Umberto Tosi is the author of Ophelia Rising, Our Own Kind, High Treason, and Milagro on 34th Street. His short stories have appeared in various journals and magazines, including Catamaran Literary Reader and Chicago Quarterly Review, where he is also a contributing editor. During the 1990s and early 00s, he covered Silicon Valley startups for Forbes ASAP and was managing editor of the pioneering digital publishing firm MightyWords. He was editor of San Francisco Magazine and a longtime staff writer and editor for the Los Angeles Times. He has contributed hundreds of articles for newspapers, magazines and online publications over the years. He joined Authors Electric in May, 2015 and has contributed to several of its published anthologies, including Another Flash in the Pen, Sparks 2 and 3.

glitter noir said…
Happy birthday in advance, Umberto. And thanks for the thoughtful and beautiful piece.
3 May 2017 at 02:11

Bill Kirton said…
I'm a couple of year behind you, Umberto, so I share your perspective. I'd also add what's become a self-evident truth - our generation has been one of the (perhaps even THE) luckiest so far. We've been supported as kids, our education and healthcare have been free, there were jobs, we were the first 'teenagers', enjoyed the sixties and beyond, etc., etc. How sad that some of us have let the youngsters down so badly with our uninformed voting. But your blog's a celebration. Congratulations, happy birthday when it comes, and keep on keeping on.
3 May 2017 at 10:13

Marsha Coupé said…
Your legacy is to have made everyone who knows you that bit braver; more politically conscious; more optimistic and constantly craving a big bowl of your spaghetti bolognese, while listening to opera and quaffing Chianti. Buon Appetito Umberto!
3 May 2017 at 22:04

Dipika Mukherjee said…
Bravo Umberto and Happy Birthday in advance. You have contributed so much to the Chicago Literary scene, both by your writing as well as your support of other writers, and I wish you many many years of productivity. Now more than ever, we need writers like you and you are a true inspiration.
4 May 2017 at 08:06