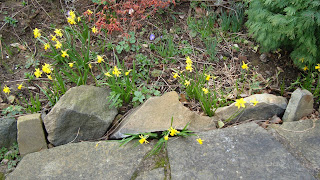 I’m not a fan of spring. I find the light too clear and too cold. It picks up all the smears and smudges that should be best kept hidden and pricks the conscience into spending time with mops and dusters instead of in my office writing.

The one thing that redeems the season is, to quote Wordsworth,
“A host, of golden daffodils…Fluttering and dancing in the breeze.”

In the part of the country where I live, you get swathes of golden blossom planted along roadsides, or on roundabouts, which never fail to lift the spirit on a grey blustery March morning.

This is the effect I wanted to reproduce in my own front garden, when I planted clusters of mini daffodil around the acer. Last autumn I snuggled the blubs around the tree secure in the knowledge that come spring I would have my own sweep of yellow to cheer me up.

But it hasn’t quite worked out that way.

Admittedly the bed in which I planted them sloped towards the drive, but I certainly didn’t expect my daffodils to attempt a breakaway dash downhill. Nor did I think that any brave blossom would find its way out beyond the restraining stone border.


I’m still puzzling exactly how the daffodils managed their escape, but it did occur to me that this attempt at freedom can be compared to writing a book.
Like the original planting of my flower bed, I begin with a plan. I have a chapter by chapter break down of the story and a fairly good idea of where and when it will be set.


At that point my characters will make a break for freedom and set off on their own path. “City of Secrets” was always going to begin with Letty Parker sitting on the quayside worrying about the disappearance of her friends. However, her Bristol was going to be a real place. Set in Victorian times the street children, who go missing, would be working as chimneysweeps, seamstresses, glass and nail makers and in the tin mines.

But somehow that was working. I’d begun the research, but it felt too dry, too polemical. What was missing was that element of magic and fantasy that kept intruding into Letty’s life and which was to develop into Gabriel. Her friend and protector, he is also one the Dark Ones, who view humanity as inferior beings to be used and exploited in their quest for power.

Like the daffodil the story had slipped under the barrier I had erected and  taken a new and more effective turn.

Bill Kirton said…
I share your reverence for/awe of daffodils and their welcome and timely appearance, Misha. And your comments on the seeming 'independence' of your story remind me of a remark made by one of the members of a panel I chaired once at the Edinburgh Book Festival. She said, 'You have to give your characters room to dance'.
11 March 2019 at 10:30

Umberto Tosi said…
I'm daffy for daffodils myself as well! I never thought of them as a metaphor for writing a novel. Makes valid, clarifying sense, however. Here in Chicago, spring doesn't really come until April. First the crocuses come up, then the daffies, followed by the poppies - then the rest as the trees begin to bud. The hills and meadows of California where I used to live, are, by now covered in wildflowers and bright green grasses from the winter rains - lupin, golden poppies, quite a sight, as are the high desert plateaus.
11 March 2019 at 20:54

Sandra Horn said…
Lovely post! My escapees are celandines, which find the most inaccessible, apparently barren spots in which to grow. I hope that's a good metaphor for a story!
13 March 2019 at 10:02