The Joys of Football and Shipping by Sandra Horn


Before my next brother was born and we were allotted a prefab, we lived with my mother’s family in an old stone-built house with three stories and a basement. It’s still there, now called Wealden College, a centre for psychotherapies. At the time we lived there, the family comprised my Great-grandparents, grandparents, parents, and my mother’s siblings; three aunties and four uncles.  After the birth of my brother we still went to the old house every day. It was a magnet for all its nestlings, long after they’d flown to places of their own and it was near the local primary school so all the children had their mid-day meals at Nan’s and were collected from there after school. There were too many of us to eat at the table at weekends, so the children sat along the big old sofa in the window bay to have their fish and chips (from the shop across the road). Toast was made over the open fire, with long brass forks. White bread from the local baker – we were lucky if we managed to brown most of it, in between the burnt and raw bits. Delicious, and dripping with butter!

It was a pretty free-and-easy household and children were indulged up to a point, but there was one solemn ritual we were not allowed to interrupt. It was sit still and be quiet, or go outside when the football results were being read on the wireless. Coupons were spread out on the table to be filled in, pens fished out from the dresser drawer, and we did not dare make a sound until it was over and the pens were thrown down, usually in disgust, and loud comments from the menfolk battered our ears. For years I had not the remotest idea what was going on, except that it was something very important, and also very delightful to listen to. I could sit through it happily, listening to the exotic words: Accrington Stanley, Heart of Midlothian, Tottenham Hotspur, Preston North End, Aston Villa... all very mysterious and poetic.

The other thing we listened to religiously was the shipping forecast. We were 25 miles from the sea and had no connection to ships of any kind, yet could not turn the wireless off until it was finished. As with the football teams’ names, it was meaningless to me, yet hypnotic. The strange exciting words followed by, as I later learned, the wind speed, visibility and prevailing conditions.

I now know that there are thousands of other landlocked people who listen in too, for the sheer pleasure of it. It’s like a litany in an exotic language, the words not understood but comfort drawn from the sound and rhythm of it, and its regular occurrence four times every day at the same time. Apparently, according to the delightful book by Charlie Connelly, it has even been requested as a Desert Island Disc and worked into a poem by Seamus Heaney. I’m not at all surprised. 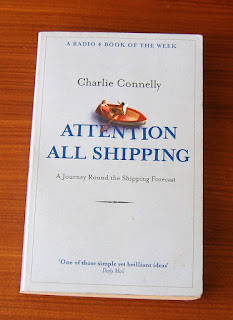 It has also inspired artist Peter Collyer to produce a stunning book of paintings of the sea areas from the forecast: 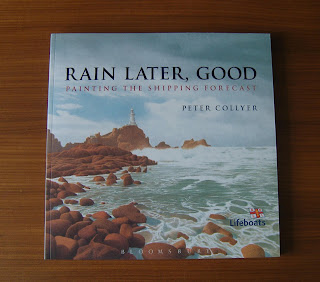 After those early years, I didn’t listen again for decades, except by chance, so I didn’t know that Heligoland had been replaced by German Bight (Bite? How could you tell, on the wireless?). What a loss to poetry! Then there was the shock of the Utsires. What? Where did they come from? How did you even spell such an outlandish word? I was enraged. ‘They’ are even mucking about with the shipping forecast now. What next? Well, what next was the replacing of Finisterre, the End of the Land, with Fitzroy. Bleugh! Of course he deserved the posthumous honour, it was his idea in the first place and over all the years he must have saved countless lives with it, but I still wish they’d just added him in rather than take away lovely musical Finisterre. Have they no souls, these people?
Here it is, just the names of locations as I remember them. Sorry, Fitzroy, North and South Utsire and German Bight; I’m on a nostalgia trip.

Bliss. (That’s not a shipping area, it’s my prevailing condition).

Susan Price said…
Your grandparents' house sounds rather like mine -- though didn't have quite so many generations.
Did you ever see the episode of Black Books that featured the shipping forecast?
20 March 2019 at 10:00

Bill Kirton said…
Yes, I'm yet another AE with very similar memories of childhood, Sandra, and I was transported back to those James Alexander Gordon (and his predecessors') days of dashed hopes.

But then you moved to that regular dose of mysterious poetry, The Shipping Forecast, (mysterious even though I actually lived across the road from the fish quay of one of the labels, Plymouth), and it brought back so many wonderful thoughts. (There must have been bad or sad ones, too, but it's the happy ones that persist.) Thank you for such a lovely personal (for you and me - and Susan, it seems) reminiscence.
20 March 2019 at 12:21

Umberto Tosi said…
Your evocative post could well be the start of a family epic - one I would love to read. You called up memories of my own multigenerational family nest from the days of my 1940s childhood in Boston, Massachusetts before the old folks went their way and the young set off in all directions, suburban and beyond.