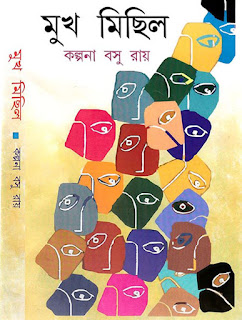 My mother, the closet writer, has come out at last!

At 70, she has published her first book of fiction in Bangla – “Mukh-Michhil” (A Procession of Faces). It is a collection of 45 short-shorts (or ‘Anu-golpo’, as they are called in Bangla). Initially inspired by the popular Bengali writer Banaphool’s ‘Natun Golpo’ in the late 1970s, she has been writing off and on in this genre ever since.

Encouraged by her uncle, the well-known author Manoj Basu, Ma actually started writing in the 60s – when she studied and taught Bengali literature - but except for some sporadic submissions in magazines, didn’t publish till recently. She has never stopped writing, though. She is blessed with an inexhaustible fount of creativity: gathering dust in her desk-drawers are some 200 poems (poetry is her first love), 150 limericks, 40 stories and 2 unfinished novels! For many years now, I've been coaxing her to take them out, with my sister and father later joining the chorus. In 2010, a book of ‘chhara’ (rhymes) for children was published. “Mukh-Michhil” was about to come out soon after… but as often happens with books, took a long time to find the right publisher.

Ma’s life had begun with rainbow hues… and then after marriage… it became monochromatic for decades - a familiar enough tale, which she has herself turned extraordinary, by keeping her passion for writing alive through all the travails of her life. I only hope that the colour comes back to her life again, brightened anew by sharing her writing with the world!

So, here’s introducing – with incredible joy and immense pride – my mother, the writer Kalpana Basu Roy. 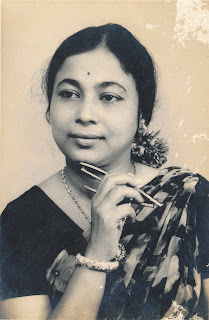 KALPANA BASU ROY (1944 – 2016) - Mother, teacher, friend, soul-mate.
Ma passed away most suddenly on 20 August, 3 days after suffering a massive cerebral stroke.
There was no chance to do anything….
She died as she had lived – without disturbing her daughters. 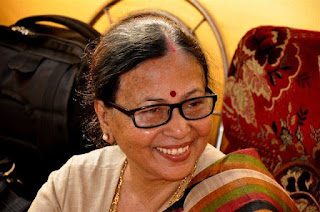 A part of me died with her. The rest of me... is hobbling along, battling all that life has to throw, without the balm of her tender presence, the weekly reassurance of her voice.

I never really got a chance to grieve her death. Yes ‘death’; I won’t call it ‘passing away’ any more. I doubt its meaning now. ‘Passing away’ into what? Another existence? – may be, I don’t know. And I won’t really know, until I die. And then, it would be too late to argue with those living. I also refuse to call it ‘passing away’ because that sounds so much softer and doesn’t do justice to the rude shock - and the finality - of what happended. ‘Death’ is far better; and the ‘stop sound’ of ‘d’ is phonetically, at least, a closer approximation of her ceasing to be.

After her death, I gave much thought to the meaning of the word ‘death’ – “the permanent ending of vital processes in a cell or tissue”. Yes, it’s an end – so please, let’s call it that.

This defintion of ‘death’ is especially brought home to a Hindu while undergoing the funeral rites. For there is something about witnessing a body you have loved (and being loved by) being reduced to a fistful of ashes that makes all grand philosophizing about death irrelevant. The putrid smell of burnt flesh that permeates a crematorium is also a memory that can never be completely erased from one’s mind.

After death comes grief. That is a long road with an uncertain destination – depending,  I believe, on what kind of relation you have had with the person dead. If it was vital, absolutely central to your identity, then you are just not mourning, but also undergoing a re-fashioning of identity – as everything has to be started anew, the world seen and felt through a permanent absence. No matter how mature you are in dealing with the fact of mortality, this re-fashioning is a slow and painful process; and one that just can’t be conveyed to those who have not known it.

I just called grief a long road – but it’s not a linear track; rather, a circular loop of endlessly resuscitated memories. Some are poignant and nostalgic, that can be rationalized by a clearly discernible ‘association of thought’, and may elicit only a few silent tears or even a smile. Others are random moments from the past that often come flying at you without warning, and have the power to batter you down even as you seem to fare better with your sense of loss.

In these 3 years without Ma, I have managed to convince myself that it is a good thing that she is gone. The life she would have led after her severe cerebral attack, even if she came out of coma, would have been a cursed existence. What her life could have been, had she not had that attack, is a different matter... and actually a useless speculation. I have consciously avoided that path.

However, what her life was, as long as she had lived, is something that I have given a lot of thought. I have been moulded by her in a profound way... to an extent that it is at times difficult for me to understand what in me is truly mine and not just an extension of her. But in these 3 years of my mourning and re-fashioning of identity, I have critiqued her legacy and decided not to follow it blindly.

I want to emulate all that was life-affirming in Ma: her uncompromising honesty; her delight in the little things of life; her generosity towards others; her devotion to, and friendship with, us - her daughters; her ability to make literature (both in its cultivation and creation) sustain her. But I also choose to un-follow all that was persistently painful and disempowering in her life – which greatly limited the realms of the ‘possible’ for her, not allowing her to achieve what she eminently could or get what she richly deserved.

And the single most important thing in which I DON’T WANT to follow her is, to die with my desk drawers full of incomplete manuscripts.

Sandra Horn said…
What a wonderful post! A celebration of a life and talent and reflections - painful and poignant - on grief. Thank you!
26 August 2019 at 10:43

Umberto Tosi said…
You move the heart and engage the mind with this loving tribute to your Ma and communicate her inspiring creative perseverance. My condolences to you and applause to her and you as well.
26 August 2019 at 15:09

Susan Price said…
Good wishes for you, Rituparna. This truly is a beautiful and moving piece of writing.
26 August 2019 at 15:53

Enid Richemont said…
Oh such a moving piece of writing, Rituparna. I lost my very-beloved husband five years ago in a similar way, and I am all too familiar with the loss of identity feeling, and yes, he might have ended, if he'd survived the attack, as a sadly incapacitated version of himself - the only consolation.
27 August 2019 at 14:41

Rituparna Roy said…
Thank you, Enid Richemont, for your response! I think what the death of a dear one - be it parent or spouse - gives us is a renewed understanding of life & our own selves. I look forward to interacting more with you!
6 November 2019 at 15:23