A blog for Schicksalstag 2019: 3 rededications for Hitler’s ‘piece of kitsch’ by Julia Jones

By julia jones - November 09, 2019
On the morning of August 18th 1939 my father, George Jones, walked up into Kiel to buy milk and bread. He and his companions on the small motor yacht Naromis knew they were no longer welcome in German waters.  Their original plan for the day had been to head down the Kieler Fjord then turn east for Warnemunde, where they would pick up the skipper’s daughter who had been staying in Berlin. After that they had intended to press on to Danzig, their purpose unspecified. However they had been told on the previous evening that there would be no more fuel for them in Germany. Perhaps someone had noticed George and his fellow RNVSR officer Bill photographing the Kriegsmarine's latest warships. Their only possible destination now was Denmark. As George headed for the shops at seven o’clock in the morning he was shocked to see the people of Kiel lining up to collect gas masks.  ‘My mind raced back to the September crisis of the year before. I got the milk and bread and hurried back to the ship. Less than half an hour later we were steaming down the fjord at an economical speed, bound for Nakskov.’ (The Cruise of Naromis: August in the Baltic 1939) Minesweepers and a minelayer accompanied them; they observed U-boats at exercise and a torpedo boat rushed past making such a wash that a pile of their breakfast plates crashed onto the deck followed by a thermos flask which went off ‘like a small bomb’.


They moored briefly at Laboe to clear customs. Germany's great naval memorial towered over them. At 72m high it’s visible for miles. George thought its shape was that of a rudder: when Francis and I visited last week I wondered if it was intended as a sail running up against a mast. Other 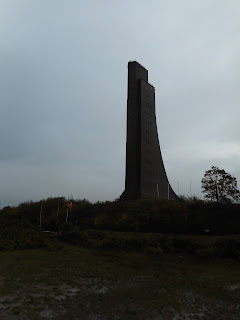 people have seen it as the stem of a Viking ship or the conning tower of a submarine. We were there on a grey day and the idea of a crematorium chimney also unfortunately presented itself. This would certainly have distressed the designer, Gustav Munzer, who had won the competition organised by the German Navy League in 1926. Munzer had begun his career as a bricklayer and stonecutter, then trained at the vocational arts school in Dusseldorf. Many students from such schools continued their training in the Bauhaus colleges but Munzer went directly into industrial planning. During the 1920s he was in Holland designing shipyards. He stated that he intended no specific reference  – merely a shape that would suggest positive feelings. Hitler – of all people – described the Laboe Memorial as ‘an unparalleled item of kitsch’.  He was wrong.  There may be kitsch in some of the individual tributes and inscriptions inside the memorial but the thing itself is stark. It's also challenging and has prompted reinterpretation.

Looking up from the deck of  Naromis, in August 1939, George assumed the memorial was intended as a simple commemoration of the dead of 1914-1918, something analogous to the Whitehall Cenotaph, perhaps. The central symbol of the Cenotaph is its empty tomb -- acknowledging that the bodies of the Great War were not repatriated. The Laboe Memorial recognises that for most sailors, the sea is their only grave. Wilhelm Lammertz, a former Chief Petty officer in the Kaiserlich Marine, and active in the German Naval League, first suggested a memorial as a focal point for national mourning. But whereas the Whitehall Cenotaph was government-organised and funded, the authorities in Germany were not interested and the Laboe memorial was financed from voluntary contributions. The aftermath of defeat was bitter. When the long process of construction began in 1927, Admiral Scheer, former commander of the High Seas Fleet at the 1916 Battle of Jutland, offered this initial dedication:

In 1936, with the National Socialist party was firmly in power and naval rearmament in full swing, the memorial briefly became a political symbol. A formal dedication ceremony took place on the twentieth anniversary of the Battle of Jutland, May 30th 1936. Commander in Chief of the Kriegsmarine Admiral Raeder made the speech, supported by Hitler (who disliked the place and never returned) together with the War Minister Feldmarschall von Blomberg; Admiral Albrecht, Commanding Admiral Baltic and Kapitan zur see Mewis, the Naval Commander at Kiel. The message was power and resurgence, not remembrance.

In 1945 Laboe was in the British area of occupation.  While many memorials and public symbols were obliterated as part of the denazification process,  the Laboe memorial was embargoed but not destroyed.  On May 30th 1954 it was handed back to the German Naval Association as part of the rehabilitation of West Germany and publically rededicated. The dedication was voiced by former U-Boat Commander, Otto Kretschmer, but this time the local dignitaries were joined by representatives of the American, British and Italian Navies. The message was a commemoration for all the German dead – and also their opponents.

From this time West Germany was allowed to rebuild a small navy and in 1955 it became a member of NATO. Over the border in East Germany another new navy developed as part of the Warsaw Pact. The main role for the East German navy however was to patrol the borders of the Baltic States and capture potential escapees. Finally the Cold War ended and, on November 9th 1989 the frontiers were opened and the barriers between East and West Germany came down. Thirty years ago.

November 9th is a significant day in German history. It's known as the Schicksalstag, the Day of Fate.  November 9th 1918 was the day that the Kaiser's abdication was announced and the Weimar republic created. The Nazis made their first bid for power at the Munich Beer Hall Putsch on November 9th 1923. Then, on November 9th 1938, came Kristallnacht. That's a memory of destruction which nothing can expunge, yet the fall of the Berlin Wall at least uses destruction as a positive force.

In 1996 the meaning of the Laboe memorial was positively reinterpreted once again. Its current (and final?) dedication reads:

Warships of all nations dip their flags as they pass by.

Bill Kirton said…
A wonderful history lesson/memory for all of us who lived through those years. Thanks, Julia. The various incarnations (and significances) of that wonderful monument are both chilling and uplifting (and its shape fits all the varying 'interpretations' you recall). Overall, though, I'm left with a feeling of wonder (and/or discombobulation) at the huge gulf between those worlds and the one we're living in. I only hope the present one learns from them (although I'm not sure 'hope' is legitimate currency with our current crop of 'leaders').
9 November 2019 at 10:16

julia jones said…
I held back from making any present day comments but they would have been depressed
9 November 2019 at 10:37

Umberto Tosi said…
Thank you for this vivid, ominous, historical tableau! It evoked some of the best histories of the era. Your father's flight down the fjord is the stuff of war movie thrillers. I got a kick out of your reference: "'Hitler – of all people – described the Laboe Memorial as ‘an unparalleled item of kitsch’" Ha! Hitler - herr benality-of-evil himself - calling something "kitsch" sounds as ironic at Donald Trump calling someone "corrupt."
10 November 2019 at 02:58