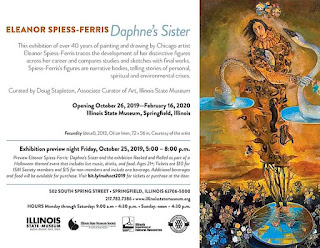 Recently my inamorata and I took a train from Chicago down to Springfield, the Illinois state capital (not the Simpsons' Springfield). It's about four hours each way through harvested, stubbled Midwest cornfields, clusters of giant wind turbines and riparian woods splendid with fall colors.

We traveled downstate overnight to attend the grand opening of the Illinois State Museum's Oct 26- Feb 16 show honouring her artwork over the past four decades -  "Daphne's Sister," an Eleanor Spiess-Ferris retrospective displaying scores of her surreal, post-imagist, narrative paintings, drawings, and other works.

The well-attended opening more than lived up to expectations, with works displayed dramatically by noted collagist Doug Stapleton, the state museum's Associate Curator, tracing a forty-year evolution of her other-worldly creations exploring nature, emotions and the feminine form. The show's introduction notes: "Spiess-Ferris has been drawing from a live model since the beginning of her career; an essential practice for her experimentation with the narrative figure. Her life studies often transform into their mythic selves in the process of a drawing session, shifting from observation into invention through distorting proportions and imposing natural forms as essential elements of the body."

The affair also provided me an excuse to ride a train at distance - something I rarely pass up. Like many of us, I've been fascinated with rail travel since I was a kid. For many years I tried to keep this out of my writing as a childish thing, to be packed away with model train sets and teddy bears. I've given up resisting and climbed aboard the train metaphor express as I turned more and more to writing fiction in the past decade. It's not just a fascination with toys - the subconscious has its reasons for visiting obsessions on us writers and artists. 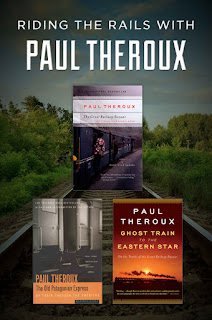 My fascination is not so much "railfanning" but with being a passenger, particularly over long distances - as depicted ideally in that master of train travel writing Paul Theroux's iconic 1975 travel adventure The Great Railway Bazaar chronicling the author's four-month train journey from London to Southeast Asia and return. Theroux makes magic by keeping his journal on the people, culture, and history, not just about trains, Similarly, Agatha Christie's 1934 Murder on the Orient Express, one of my other favourite train books, isn't about railroading. Neither is another in my library, Graham Greene's classic 1932 mystery, Stamboul Train.

Like the long list of other eminently readable mysteries and romances, these use rail passenger train settings as metaphors, for atmospherics and - like steamers - the way they throw strangers together for long enough to spark stories - as static settings and no other conveyances can do, except perhaps wagon trains and interstellar spaceships.

All well and good, but long-distance trains don't provide as plausible a 21st-century setting as they did for those past mysteries set mostly in the 1920s and '30s. I'm old enough to have actually experienced what turned out to be the final years of that golden age of train travel when I was a boy in the 1940s and early 1950s when I caught the bug. I grew up in Los Angeles, where my parents resettled during World War II from Boston, Massachusetts - diagonally more than 3000 miles across the North American continent.

Both my mother's and father's families remained in New England - as did my mother's consciousness during those years. Boston was always "home."  We would travel back "home" by sleeper train from Los Angeles to Boston and back every year at Christmastime - four weeks in total during which I brought school books with me to cover the time I'd miss in school. As if that weren't enough, my mother also took me back to the East Coast for the month of August - again by train, just the two of us this time -- to would join her family at a beach house on Cape Cod.

These trips - which took three days and nights each way - were formative experiences of my young life. I imagined being a writer with a private suite, travelling endlessly by train as I cranked out novels on my portable typewriter. I'd have settled for being a conductor in a pinch, but not for train driver, because that would not have given me the run of the train itself with each with its fancy, linen-cloth dining car, smoke-filled club car and observation cars.

I did wonder why conductors were white and porters black back then, and people of different color rode mostly in different coaches. "People like being with their own kind," my mother said, brushing off my questions. Many years later, I was to use that expression as the title of my novella about love, race and the tragedies of 1968 - "Our Own Kind." As a kid on these trips, my parents would let me roam back and forth through the cars - to let off energy - and give themselves some respite, and a chance to play endless games of gin-rummy while they gabbed, smoked and sipped Scotch in the club car.

Another of my novellas, "Life After Creme Soda" - yet unpublished - an offbeat, coming-of-age about a gawky high schooler who works summers on a mystery-theater-dinner-train operating on old Souther Pacific tracks winding through the orange-orchard hills of Fillmore, just north of Los Angeles.

Allowing my train fixation to surface in my writing yielded an additional, unexpected benefit of personal insight. I realized that although I grew up in Los Angeles amid people in films and the arts, and became a newspaper writer (and later a magazine editor) observing many worlds - political, academic, social, artist - up close, I've always felt on the periphery of things - an outer planet circling the inner rings of the solar system. The same went for many personal experiences. I was traveling. I was a passenger on a train, mingling with strangers who went their separate ways when the train arrived at its given destination and I boarded another. I was always someone from somewhere else, just like all the other passengers on the train. Maybe that's what writers do, but best to be aware of it.

Growing up in the Golden State myself prolonged my experiences with trains - being as large as some countries and with frequent train service among its several major population centers. My parents divorced when I was 10. I lived with my mother during the school year in Hollywood, and with my father in Northern California during the summers. I traveled back and forth alone on the Southern Pacific Railroad's "Daylight" - considered a classic now as one of the last streamlined steam-powered luxury trains from that era. I noted changes not only in the scenery but in culture as I journeyed from the glitzy, dry south to the greener, more diverse, cultivated north.

Don't take me for a nostalgic, my love of train travel notwithstanding. I don't believe the good old days were all that good, and I regard myths of golden ages at best as prime literary grist for fantasies, although mostly hogwash, and mostly of the dangerous kind that engenders usually self-serving resistance to change. I recalled something related to this issue on my recent train trip down-state to Springfield. On the way down, I used the lavatory and got stuck inside for a few minutes when the sliding door jammed and a good Samaritan passenger helped me loosen it. I joked about it with a pair of friends who were sitting across the aisle from my inamorata and me.

One detail about how the toilets worked on the old trains during the golden age of train travel of my childhood. To wit: when you flushed, water gushed and a flap at the bottom of the bowl opened up, just like nowadays. But instead of the offal flushing into the train coach's septic tank, the flap opened up to the outside below. When I was a kid, I would work the plunger over and over and stare down into the bowl to see the flap open and view the ties of the rail-bed flickering by beneath my feet. This was the reason, by the way, that no one was allowed to use the toilets while the train was at a stop.

Thinking of this arrangement now, I realize that, encapsulated snugly in those sleek, beautifully appointed, luxurious, 20-car trains - of which there were many snaking across the continent through mountains, deserts, pastures, and farmlands in those days, were merrily strewing their bodily wastes along thousands of miles of pristine countryside with nary a care in the world. What a metaphor for the obliviousness of our culture in those days! Such multi-level obliviousness remains with us - just in different forms - although we congratulate ourselves on having become more aware. Of course, nowadays we litter our lands and oceans with plastic instead of poop, which is worse. So much for our golden ages.
----------------------------------------

Due to having artificial intraocular lens implants, Umberto Tosi is technically a cyborg. He is the author of Sometimes Ridiculous, Ophelia Rising, Milagro on 34th Street and Our Own. His short stories have been published in Catamaran Literary Reader and Chicago Quarterly Review where he is a contributing editor. He was contributing writer to Forbes, covering the Silicon Valley 1995-2004. Prior to that, he was an editor and staff writer for the Los Angeles Times and its Sunday magazine, West. He was also the editor of San Francisco Magazine. He has written more than 300 articles for newspapers and magazines, online and in print. He joined Authors Electric in May 2015 and has contributed to several of its anthologies, including Another Flash in the Pen and One More Flash in the Pen. He has four adult children - Alicia Sammons, Kara Towe, Cristina Sheppard and Zoë Tosi - nine grandchildren, three great-grandchildren. He resides in Chicago. (He can be contacted at Umberto3000@gmail.com

Wonderfully evocative post, Umberto - thanks. Us pore English (mainly in the North) still sometimes seem to spend three days and nights getting from one town to another, and we occasionally get delayed not by 'offal' on the line, but wet leaves. Hard to believe it was us wot invented railways, innit? Just to put the tin lid on though, on some train lavatories 'instead of the offal flushing into the train coach's septic tank, the flap open[s] up to the outside below.'

My favourite railway book is short - short and wonderful. It's Heinrich Boll's The Train Was On Time (Der Zug War Punktlich) in which a German soldier, his furlough over, goes from Paris back to the Eastern Front, where he is convinced he is going to meet his death. The evocation of a crowded, painfully slow trip right across a shattered Europe is horrifying. And of course, the train is on time.

Great stuff, Umberto (although I'd like to have seen more illustrations of ‘Eleanor Spiess-Ferris’s retrospective’).
I dont have your passion for railways (I tend to associate them with goodbyes - especially final ones from girl-friends), but your lovely post did take me back to my own experiences of all the trappings of 40s and 50s journeys, as well as my surprise when, being used to the notoriously unpunctual British Rail trains, I first went to Paris as a student and witnessed travellers berating the driver of an incoming train from Lyons which was a whole 4 minutes late.

Thanks for your kind words and shared experiences, Jan and Bill! I also love Heinrich Böll! I never thought of British Rail trains are particularly late - compared to others - but, of course, being a tourist one enjoys leisure and the waits usually are well worth it traveling by train - except if the tracks are washed out in some weather catastrophe as can happen here the mid-America.