I wish everyone a happy, healthy and creative 2020!

2019 had its share of horrors with which we’re all too familiar, but to start the new year I’m going to concentrate on a huge December lifting-of-the-spirits for me. I signed up to Live Canon’s Poetry Treasure Hunt, which began on December 1st and ended on 31st, with a new clue and a new poet’s work every day and a grand finale on 31st incorporating all the clues.
Each day, an email arrived with a short biography of a poet, a link (or links) to a video of the poet or someone else reading their work, sample texts and a particular poem which contained a clue – in every case, a missing word to be identified and recorded. The range was very wide, across continents, traditions and time, from the 17th century to now. It included 8 poets whose work I knew, or rather, some of whose work I knew: Christina Rossetti, Derek Walcott, John Betjeman, U A Fanthorpe, Robert Frost, Sylvia Plath, George Herbert, Isaac Rosenberg. All the rest were new to me. 22 new poets and their works to explore. I could hardly wait to log in every day. Bliss. 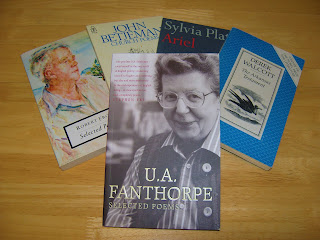 Of all the poems, there was just one I couldn’t relate to – modernist, clever in its way, but it just didn’t ‘speak’ to me. There was much to delight in with the others, though – the phrase ‘what did I know of love’s austere and lonely offices’ from Robert Hayden’s ‘Those Winter Sundays’ has stayed with me and will go on doing so; it resonates, somewhat painfully, but that is one of the great strengths of poetry.

The end result, on day 30, was a list of 20 completely unrelated words. I had no idea what the final clue could be. How was it possible to make any kind of sense from them – words such as austere, gull, Arizona, against, purple? It turned out to be such good fun. The first ten words resulted in the number 16 (how many cantos had this poet completed of a particular work before he died). For the second ten words, the first initial of each word had to have a numerical value assigned according to where it came in the alphabet and the resulting numbers were to be summed: 121. The third set of ten were from a Shakespeare sonnet, which number was it? Easy: 49. Juggling the numbers by multiplying two and taking away the third gave a date; the year of a poet’s birth and the final question was how many nectarines did the poet write about. When I got to the answer, I felt like a lottery winner! AND there was a prize! An anthology of poetry! Yay!!

Finally, finally, there was a challenge to write a poem with all 30 words included. I wasn’t sure if it was remotely possible, but I was so fired up by then that I had to give it a go, so I did, and sent it off. Here it is – inevitably a bit of a mishmash but it sort-of works I think.

Do you remember, Love, that one white gull,
conjured from thin air?
Then nine more. Neat, decorous,
perched like a drift of snow along the fence
to watch us eat. Chips and fish –
a many-syllabled Maori name
we’d never heard before.
They did not rush, dart at us, snatch, just sat
like very neat clean beggars, shy of asking,
full of hope. Alien birds.
We were so far from home,
Anchored to that bench, sitting tight.
With one too-sudden move we could fall
Over the edge of the world.
Time was unspun, watches deceptive,
Days lost when we flew ever further south,
Gained, mysteriously, on our homeward way,
No longer marching to a linear path
The aeroplane soaring against gravity-
the laws of physics we’d thought fixed, immortal,
Were now cast into doubt. What were we at,
To journey halfway round the world
In these our later years?

In our other lives, before we met,
You’d lived in Loma Linda, Cal.
Taken trips to Mexico, New York, Arizona.
Your freckled skin shows, even now,
Marks of the injurious Californian sun.
As for myself, I’d seen the tumbled wrecks of Carthage,
The walls of Kairouan, bright-eyed barefoot children,
Polyglot beggars, ‘poor’ in possessions, rich in life,
Veiled women whose curious eyes reflected mine.

Had we thought ourselves well-travelled then?
Perhaps, until that email sent us so far east and south,
It seemed like a long dream – or game of fantasy.
A world unknown except as places on a map.
A world at once so strange and so familiar –
And here we were in it, eating fish and chips,
watched by ten white gulls.

And there was another prize; two poetry collections! The icing on the proverbial. Yay! 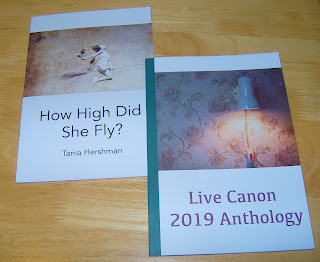 So, a cold grey wet December beset by rotten health problems was transformed into 31 days of delight. I hope the energy and uplift it gave me will last and become a boost to creativity to start the year. Thank you, Live Canon!

Bill Kirton said…
Bravo, Sandra. First I marvelled at your tenacity in taking on such a forbidding task, knowing I had neither the intelligence, nor the stamina or research skills to persist with such demands myself, then I read your poem and was even more certain that it was all well beyond me.
I'm not a poet but I envy those who manage to manipulate words in ways which tease out otherwise inaccessible meanings and somehow tell stories beyond the words themselves. Thanks for such an inspiring post.
20 January 2020 at 12:27

Ann Turnbull said…
Wow, that's impressive, Sandra! Well done! The maths involved sounds a bit daunting. I think the whole thing would defeat me, though I am halfway through the 52 Project, which I believe you have also done? That's made me much more productive, though I foundered in December. How on earth did you find any time in that month?
20 January 2020 at 16:22

Sandra Horn said…
Dear Bill, you are too kind. i'm a bear of very little brain but just a poetry nut.
Dear Ann, I'm retired so my time is (by and large) my own. I didn't manage all the 52 - faded at 48 and not all the completed ones were worth a jot. I did get some useful ones, though - and like you, it did make me more productive.
20 January 2020 at 20:01

Umberto Tosi said…
Kudos, SandraI loved this vivid, evocative poem you spun so inventively from scattered words salvaged with such determination - well worth the wait. The treasure hunt does sound entertaining as well as challenging and inspiring. Worth trying again this year!
20 January 2020 at 20:25

Eden Baylee said…
Hi Sandra, happy new year to you too! What an incredibly creative December you had!

You made my heart soar with how relatable your poem was. That all the words fell into place was no easy task (I'm sure!), but it reads effortlessly.

August will be something to look forward to!