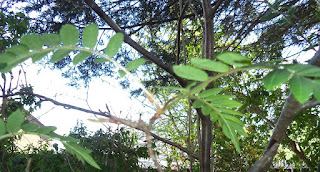 In a way it seems like every introvert's dream life. Encouraged to stay at home for the common good, only venturing out occasionally for very specific reasons, and always able to use technological failures to explain away absence from meetings or even virtual coffee breaks. Yes, actually, I am fairly relaxed in many ways about life in lockdown. In my case it doesn't even have the nightmarish 'hell is other people' aspect that it does for some others, as I tend to see quite a lot more of the three family cats than I do of the two people I live with.

Because there are three of us here (although six including the cats) the situation  reminds me of  the play 'In Camera', also known as 'No Exit', by Jean-Paul Sartre, which I remember viewing  on television years ago. Its three characters are trapped together in a room, apparently for eternity. Incidentally it was a memorable production, with Harold Pinter playing one of the parts. I must say I wouldn't like to have been trapped in one room since mid-March with my two family members, although I am coping well with sharing a whole house with them. I think it helps that I spend most of my waking hours in the conservatory and can see the sky and the garden. As far as the eternity aspect is concerned, I think we are all hoping the lockdown will not last as long as that, although personally I have no intention of taking any chances by going out and partying too soon. It helps that I don't really do partying anyway.

The friend I usually go to the theatre with is stuck at home catching up on her reading. We both miss seeing live events or even going out to the cinema. I always find that if I've made the effort to get ready and actually leave the house to go and sit in a theatre or other venue to watch something, I give the play, film or concert more of my undivided attention than when I relax on the sofa at home watching similar things on television, glancing at Facebook or Twitter from time to time to make sure nothing vitally important has happened since I last looked.

There are so many online events available now that I'm having to write them down in my diary to give myself any chance of remembering to watch or listen to them. It's worse than trying to plot a course through the multiple festivals with which Edinburgh is usually filled every August. I've already completely failed to stay up late enough for / remember to look for in time / get the video stream working for some of the things I thought I was really interested in.

Then there are all the possible ways in which technology can fail. My television appears to have a YouTube option in its menu, which I imagined would be excellent for watching some Shakespeare plays, I think from the National Theatre, recommended by a friend, but getting it to connect to the internet proved to be a step too far. Facebook videos either play or don't play, depending on factors beyond anyone's control, and for one event I found I had to register before watching it, which put me off it altogether. The sound on my laptop has apparently stopped working too. However, I have made one important breakthrough in the past few days. I've discovered that the version of Facebook that's on my Kindle Fire can't play videos - it isn't just me, which was of course my first thought - but I've now managed to install a better functioning Facebook app on my phone, and as if by magic I have moving pictures. I wouldn't want to watch a whole feature film this way, but it's excellent for seeing my grandson playing in the garden! I think it should also be ok for 'live' events that are quite often delivered via Facebook these days.
I am a fairly recent convert to the use of mobile phones for anything except text messaging. But I was lucky enough to have lost patience with my old phone just before this crisis began, due to its 2-hour battery life and tiny amount of storage, and to have bought one that can do all sorts of things that have now become vital, such as video calls and online meetings. 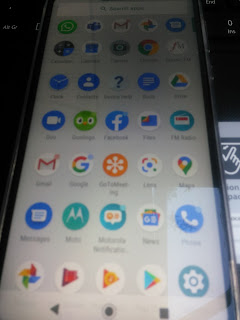 Despite my grumbling, I must say I admire the initiative and determination shown by all these theatre companies, actors, musicians and writers who were due to appear in live events and who are now turning to online appearances, mostly, as far as I can tell, without being paid. I do worry about this aspect of it, but I know it isn't easy to persuade people to pay for things like this when there is so much free content about. It can't be quite the same as being in a real audience at a live play, concert or (cue heart-rending but silent sobs) Edinburgh Book Festival event, but these online events are welcome oases in what could have been a year of cultural drought.

Umberto Tosi said…
So true. Applause to all the creative people who keep enriching the streams of culture and inspiration online, making best use of this pandemic lockdown in ways that I hope prove lasting! Like you, I will miss the festivals, though. Stay well, safe and creative!
6 May 2020 at 07:08