By Katherine Roberts - May 21, 2020
Don't panic... I haven't heard any horrible new rumour that Lockdown is going last quite that long! But it's interesting to see how science fiction writers often get things uncannily right, sometimes hundreds of years before the actual events become part of our history. So here are three classic reads - one from each of the past three centuries - which are reflected in some way by current events. If you have your own favourites, feel free to add them to the comments below.

"Yet across the gulf of space intellects vast and cool and unsympathetic regarded this earth with envious eyes, and slowly and surely drew their plans against us..." 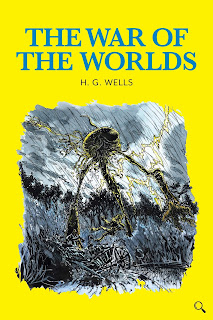 A tale of Martian invasion that was so realistic when first broadcast over the radio it caused many people to panic, thinking aliens were indeed attacking the Earth.

These 19th century Martians land in individual pods and set about building themselves giant metal fighting machines that stride across the Earth, zapping any unfortunate human they come across. Man fights back, of course, but all looks lost until...

I won't give the ending away in case you haven't read it yet, but maybe we shouldn't be too keen to kill off our homegrown viruses? 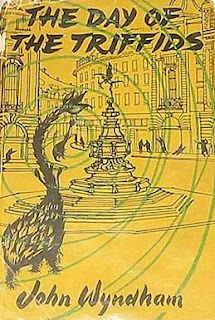 Most of the human race goes blind after watching a spectacular meteor shower, leaving our hero Bill Masen (a biologist recovering in hospital that night after having his eyes splashed by poison) as one of the few sighted survivors able to fight off the giant "triffids" - mobile carnivorous plants that view humans as tasty snacks, rumoured to have escaped a bio-engineering project in the 20th century Soviet Union.

Reportedly influenced by HG Wells' War of the Worlds, scenes in this book were inspired by the author's observations of a strangely deserted London after the Blitz... sound familiar to anyone?

And those meteors do not turn out to be entirely innocent, either... so who among you watched the 5G satellite display? 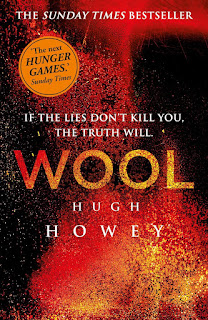 Originally a short story published independently via Amazon's KDP, Wool grew into a novel of the same name and now has two sequels - Shift and Dust.

Following an apocalyptic event that turned the atmosphere of the Earth toxic, humans are surviving in a buried silo, controlled by IT from the central levels, where the punishment for breaking the many rules necessary to keep order is to be dressed in a suit with limited oxygen and banished from the silo to clean the cameras that allow people inside their only view of the surface. Once outside, however, you are not allowed in again, and most people collapse and die in full view of the cameras when their suits disintegrate, discouraging further rebellion. Strangely, however, nobody refuses to clean...

This book has obvious lockdown parallels and might seem a bit claustrophobic for current times, but it's character driven and draws you into the story through the viewpoint of 21st century heroine Juliette, a mechanic from "down deep", who is chosen to be sheriff after the old sheriff - distraught after his wife goes crazy and is sent to cleaning - begs to join her in death outside. Juliette gets the job against IT's wishes, promoting her to the upper levels where she has a view of the tragic couple lying dead in each others' arms, and slowly begins to uncover the truth of the silo - only to find there are some truths it is better not to know.

Over the years, it seems our monsters have got smaller and closer to home. What, I wonder, will science fiction authors be writing next century, perhaps inspired by our current coronavirus crisis?


*
Katherine Roberts writes fantasy and historical fiction for young readers, and is waiting for the end of the crisis so that she can write a bestseller like one of the books above. Meanwhile, she has has used lockdown to tread (at a socially respectable 2m distance) in Hugh Howey's footsteps, and has reissued her Pendragon Legacy series in both paperback and ebook via Amazon's KDP using cover art by her own fair hand... here are all four paperbacks, hot off the press: 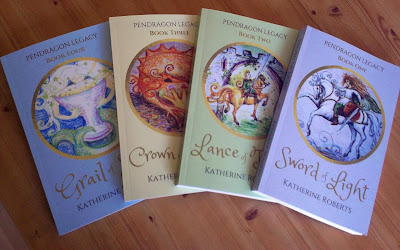 Want to try before you buy?
Don't miss her special lockdown offer!
Book 1: Sword of Light ebook - only 99p/99c

Jan Needle said…
Great stuff, Katherine - a timely reminder of some fabulous books. I'm going interspacial in my next shortie in the Corona Capers series, but these invaders come not to take over the world but to find out how to run a zoo and make good burgers! Which is why it's called Guy the Griller. I blame the lockdown - I'll get me coat...
21 May 2020 at 11:45

Lockdown gives us plenty of time to reflect on ... books about lockdown, hehe.

I remember loving THE DAY OF THE TRIFFIDS as a kid! Thanks for the reminder to pick it up again.

And yes, Day of the Triffids is one of my favourites... though the triffids tend to get mixed up in my memory with the machines in War of the Worlds, which makes sense if one book inspired the other.

Eden Baylee said…
A childhood fave was The Chrysalids, which I just looked up and completely forgot was also written by John Wyndham.

I actually prefer this one to Day of the Triffids. :)