During the recent lockdown I’ve been reviewing my lifestyle and as a result I’ve taken one important decision but I’m still dithering over another one. First of all, I’ve enjoyed having the opportunity to work from home – I just wish my employers had enabled us to do it years ago so that I could have used my brain more fruitfully, particularly in the area of strategy and anything else that required concentration. But what I’ve also realised is that although I like being at home all day, there are aspects of my work that are so mundane that there’s a distinct possibility that a trained monkey could carry them out. Although I wouldn’t ever wish to subject an innocent little monkey to such stultifying boredom.

Anyway, having come to the realisation that there may be better ways to spend my time, I’ve decided to retire from my day job at last. I can picture my line manager rolling her eyes and saying, ‘Thank goodness for that!’ although she would never be ill-mannered enough to say so either to my face or behind my back. We’ve worked together for just over thirty years so I’m fairly confident about that. I am well past retirement age and I have the sense of having seen and done everything in the institution where I work, so much so that I can foresee the same things coming round again as if being in the workplace were like watching some kind of macabre carousel in a horror movie.

I’m also toying with the idea of giving up on my voluntary committee work, which I’ve also been involved in for a ridiculous amount of time, although not as much as thirty years. Maybe somewhere between fifteen and twenty. Sometimes the mere idea of writing up the minutes for yet another long rambling meeting fills me with dread. However, I wonder if it would be a good idea to give it up at the same time as I retire. What if I suddenly find myself with too much time on my hands?
[Pause for hollow laughter]

Well, I have my writing, of course. This is what I’ve really wanted to do with my time for years. Or is it? Will I suddenly have nothing to write about? Once the rest of my life is a metaphorical blank page, will I develop the fear of the real blank page that sometimes causes people to stop writing altogether?
The housework will still be here, of course, and the gardening. I shouldn’t even put them in the same paragraph, never mind the same sentence, because I hate housework and I love gardening. I’ve recently taken steps to make the garden very slightly easier to manage by having overhanging trees and large shrubs hacked into shape and some of the undergrowth cleared away. However I’m still not completely sure whether it will prove to be easy enough for me. I can only try, I suppose. 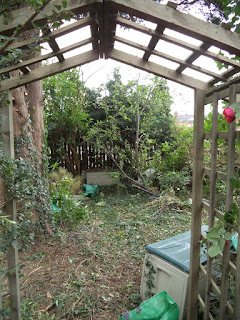 Housework is definitely a different ball-game. It comes with a lot of feminist baggage because of my years as the only female person in a house full of male people. For a while even the cats were all male. There is an added dimension to this now because it isn’t just the family who are entitled to be in the house and have an opinion about the cleanliness and tidiness of it, but the carers who currently come in twice a day and, although some of them are slapdash and leave spilled milk and Weetabix crumbs all over the hob, while others have an apparently irresistible urge to rearrange things in the kitchen so that I can’t find anything, they have been known to complain that the kitchen isn’t clean enough. There are cleaners who deal with some other parts of the house but I can’t have them rearranging the kitchen once a week. Life’s too short to do housework, but it is also too short to deal with the consequences of others doing housework.


Being at home all the time has meant I can’t avoid seeing places where things could be done about tidying and cleaning, but I know too that I’m quite capable of ignoring cobwebs, cat fur and clutter for months, years, decades… so I doubt if doing something about it will occupy very much of my time once I’ve retired. In fact now that I’ve been working from home for a few months my writing space has become more and more messy and cluttered. The urge to spring-clean that seems to have affected many people whose timelines I see on Facebook has passed me by. There is hardly any space left on the big chair next to my computer chair because I’ve put notebooks and reference books for my historical novel on it. It only takes one cat to fill it up completely, whereas before the lockdown I could sit on it and a cat could sit next to me quite comfortably.


Thinking about housework is making me reconsider my decision to retire, but I have now worked about twelve years past my official retirement age, and I’m sure it will be quite beyond me to understand the next generation of computer systems, so I will just have to make sure I focus on my writing projects, visiting other worlds instead of being stuck in this one, and thinking about them as I prune shrubs and try again to grow something edible to get us through the next international crisis!

Unknown said…
This could almost have been written by me, Cecilia! I remember, having taken the decision to go for early retirement to do my own thing (writing), I also decided that the good works could take a back seat too. It was heady stuff - take a deep breath and jump into the blue, but I have never looked back and my housekeeping has not improved one jot for all the apparent extra time I have now I no longer have a fulltime job (I accidentally typed that as 'dulltime' - it wasn't, but it was very demanding and bureaucracy heavy). I have never regretted it for a moment. I'm a writer. That's who I am. I was waiting for myself to emerge, all those years. You too. I wish you so much joy of it!
5 July 2020 at 09:38

Umberto Tosi said…
Yes. As Samuel Johnson might say, "Nothing focuses the mind like the prospect of a deadly pandemic..." You ring bells I hear too. Thank you.
5 July 2020 at 15:00

Cecilia Peartree said…
Thanks Sandra and Umberto.
Sandra, that's really encouraging! Yes, I've wanted to be a writer since I was 6 (some time ago) so this will be my time at last.
5 July 2020 at 18:39

Eden Baylee said…
Hi Cecilia, sorry to be late to comment. I'm so thrilled for you! That you had the courage to leave your day-job is cause for celebration! I left banking after 20 years to write and have not looked back. You will be amazed at how stories come to you, even amongst the mundane-ness of day to day living in a pandemic.

Congratulations on your life change!