Reading, Writing, and always being kind... by Mari Howard

A few weeks before lockdown, a well-known celebrity took her own life, leaving a note advising others to “be kind”. This may or may not have been the source of advice which circulated, as we began to live shut away from crowds, and thus places of business and pleasure, that we should now do “Small acts of kindness” to neighbours. An effort to create some coping mechanism, some feeling of community, and hope, and to take us out of ourselves.

Well-meaning but in danger, as the words became a meme, of joining with those BBC News tropes of “unprecedented”, “uncharted waters” and “strange times” which, while describing something, also managed to describe nothing. How, exactly, do we perform “little acts of kindness” when all are separated and not to get together? Of course, we do find ways… What I’m saying is, stand back and think — is it worrying that we need to be told? Is it sobering that normally we don’t do these?

Lockdown has become a meme – a subject overdone – yet lockdown is different for everyone, and has provided the chance for reflection to a society which doesn’t reflect very much. On to the next thing, and let’s hope for excitement — as was said of Millennials, “they don’t want material goods like their parents do — they want experiences”.

A Change of Reading

One small change I found myself led into was reading matter. As an avid fiction fan, my habitual reading has being in the area of long, moderately challenging novels. 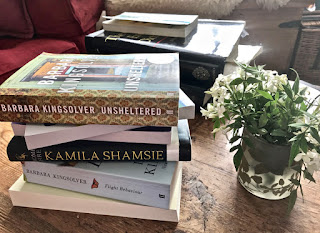 Not the popular Hilary Mantel ones (though many began lockdown with reading her latest). My taste has been a tour of novels by non-British, non-white writers whose cultures I don’t know with the histories and religious bases which formed them. Kamila Shamsie’s Home Fire, Leila Aboulela’s Bird Summons. I returned to reading Barbara Kingsolver, her latest two novels, (Unsheltered and Flight Behaviour) exploring in fictional form the effects of climate change. My lockdown change was a desire to turn to lighter novels, and to actually enjoy a “cosy mystery” set on a Greek island, (Murder your Darlings) and a diary-style account of teaching in a secondary school, tragi-comic and firmly set in today’s Middle England (Miss, What does Incomprehensible Mean?) . Challenged by having the time, I watched TV’s adaptation of Normal People, and the sociologist in me kicked in to consider its meaning. Another contemporary romance, Mix Tape, had also caught my attention, and I thought that these two stories, both published as books in the past five years, demonstrate the truth of the “plus ça change” nature of human beings and what they expect from a romance novel..., and this between couples from opposed cultures, although all Western and all-white.

Interestingly, in both stories attraction is strong and physical, taking place initially at school, cultural differences are of class, both “girls” have difficult abusive homes, both “boys” loving and nurturing ones. Both girls “escape” to a new life where they blossom. Both boys have not known the extent of the abuse the girls had suffered. Both couples keep their relationship a secret from the abusive home. Are these the present day memes of romance novels, I wondered? Mix Tape — taking place in the late 1970s — ends with reuniting the couple, whereas Normal People, a millennial tale, ends with parting for career reasons.

But then, I read the book. Memes they may be, but Sally Rooney’s story tells more than can be conveyed by the dimly-lit, meaningful looks of the TV adaptation convey. The inner lives of her protagonists, troubled by doubt around issues of identity and worth, weave in and out of this on-off relationship and give, albeit in unrelenting flat prose, what is not there in the dialogue. The tragedy of the romance between two school misfits is that each has been unknowingly the other’s tutor in adolescent development. And the ending, a disappointment to many reviewers, is indicated (though not overtly stated): as adults they — or certainly Marianne has — achieved the ability to do without the other.  Whereas in Mix Tape (set in the late 20th century) the protagonists are all set, at the end, to elope together, leaving marriage partners and grown children behind.

An indication that the meme has moved on from romance to a reality where the individual’s own career trumps caring about a person close to themselves, and self dominates over all human relationships? Or have they merely matured, rather than “using each other”? A point to consider for my review, on my website.

Reading romance novels, albeit serious ones, makes me wonder about how much the romance genre meme is an indicator of the health, or not, of a society. And put my own work under the spotlight: does my work (novels Baby, Baby and The Labyrinth Year) fall into “unshelvable” due to a low ratio of sex to other issues of the couples’ daily lives? 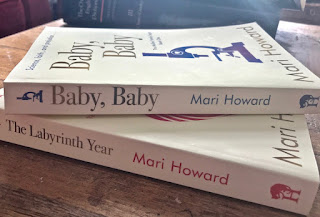 Is this because it shows too much of how they carry out the scientific interests and work which holds them together as much as physical attraction, how they work on a mystery together, and raises ethical and religious questions?  It had seemed at the time of writing these were  giving the reader some stronger food than simply the sugar of the sex drive. And it was all part of the learning curve of my two young protagonists. Or, is my story-telling simply outdated as we move onwards?

A Chance of a Future

Well that is what I’ve learned, and shall we keep up the “little acts of kindness”? Many of us have learned, as the roads quietened and there was nowhere to go except our own gardens and the nearest walkable park or common, to slow down and appreciate the natural world. My hope is that we’ll continue to and live with an eye on the survival of more birds in our gardens, more wildflowers on the verges, and more insects to pollinate them. And of course the range of readers, like the range of books, is infinite, and the human psyche does actually often return to what’s easiest. Maybe I’ll write the action next, and leave out the romance?

And so, shall we all continue to be kind?

Peter Leyland said…
Thanks for this Mari. I loved Normal People, the book, and even better, Conversations with Friends. I will have to take a look at your own novels.
22 July 2020 at 11:44

Eden Baylee said…
HI Mari, thanks for some of the books you suggested. In light of the race issues worldwide, I've been reading non-fic books by BIPOC.

Two excellent ones are:

Being kind is challenging but so necessary, especially as we remain isolated. We can be kind to those in our bubble, and those we cannot spend time with. If nothing else, we can show compassion for those suffering by not adding to their pain.